I made a return trip to see Paul Taylor Dance Company tonight. As usual, it was an oddly assorted triple bill that showed off the choreographer's incredible, if quirky range. Although I'm not nearly as familiar with Paul Taylor's output as I am with ballet, everyone can be a quick study with him. It doesn't take a dance expert to love the joy of Esplanade. The audience for these performances I've noticed is surprisingly diverse, a mix of young and old, male and female, very different from, say, Nutcracker performances. It's not good or bad, it's just different.

The program started with Roses, which I saw last week. I don't have to be very familiar with this piece to know that tonight's performance was much stronger. The movements had much more snap and flow, especially the series of cartwheels that the couples do over each others' bodies. The couples were much more coordinated and the cartwheels seemed an expression of joy. At first, it seems an odd dance movement to put into a piece set to Wagner's Siegfried Idyll, but then lovers will often resort to simple, even childish physical movements to express joy. It's a beautiful and too-little-seen Taylor work. 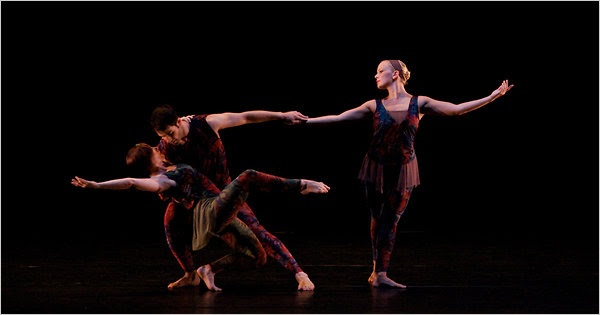 The Uncommitted was next, it's a new work that had its debut this season. I didn't hate it but it wasn't a masterpiece, and didn't have the unique energy of the other debut Gossamer Gallants. The music by Arvo Part had its moments of beauty, but the idea of men and women meeting briefly for some fleet encounters before parting is by now an overdone modern dance cliche. The costumes by Santo Loquasto were hideous -- a friend commented that it made the women look pregnant and the men fat. The lighting was way too dark for the whole stage and auditorium -- at times the dancers were barely visible. I don't know, it was okay, it just didn't jump out to me as a masterpiece.

The program ended with the company's signature piece Esplanade. It's based entirely on non-dance movements like walking, running, skipping, sliding, falling. The piece is very "70's" -- there's something vaguely free-love-ish about the dancers onstage as they seem to be enjoying a picnic/romp outside. My dad, who was a conservative immigrant, told me that when he first arrived in the United States groups of young people would often pack themselves into a car and go by a lake for a "picnic." One day a rather wild picnic ended with a frantic phone call to my dad -- would he PLEASE drive down to the lake ASAP? A car had gotten stalled on an incline to the lake and everyone was too drunk to try to drive the car out of that incline. My dad was known as the good driver among the bunch. Anyway, Esplanade reminds me of that -- maybe the best sequence of the dance is when one couple after another throws himself onstage in a belly fall. It looks like effortless fun. Beautiful, fun, timeless dance masterpiece.
at March 25, 2012 No comments: I went back to catch a second performance of the Met's revival of L'elisir d'amore tonight, and found it even more wonderful than opening night. It's really a great revival and I recommend that people catch the remaining performances -- you won't be disappointed.

Diana Damrau's was in much better shape than on opening night, where I found her voice surprisingly weak and thin. Tonight it was the familiar Damrau sound again -- bright, a bit brassy, but definitely a stellar, A-list lyric coloratura soprano. She also seemed to be more familiar with the production and cast, and added some funny acting bits that I don't remember on opening night.

Juan Diego Florez gave the same lovely, charming performance he gave opening night. I didn't think Nemorino would be the right role for him -- at times, he can seem aloof and stiff onstage. But he was an absolute delight as Nemorino. He showed his unsophisticated nature by some delightfully bad dancing, and with the classic unappealing "guy" habit of eating food with a knife. Although he did sound underpowered sometimes in the ensembles, in the duets and arias he sang with a beautiful sense of style. "Una furtiva lagrima" was taken at an unusually slow pace but Florez could handle it, and the fast vibrato of his voice worked to his advantage. It had the urgent throb of someone in love. The ovation he received at the end of the opera was just wonderful -- one had the feeling it wasn't just for his great performance tonight, it was also a gesture of gratitude to this tenor who since his Met debut 10 years ago has almost never cancelled, and in all the times I've seen him, never given a bad performance.

Mariusz Kweicien was hilarious as Belcore, and his baritone really is a very pleasant, smooth sound, really perfect for Mozart and bel canto operas. If there was one performer who seemed less impressive than on opening night, it was Alessandro Corbelli. He's kind of an old-school Italian character singer -- the type with almost no voice but plenty of comic timing and a mastery of patter. But tonight he seemed to have even less of a voice than usual, and seemed a bit disengaged from the whole performance as well. The schtick is only funny if performed with absolute conviction and unflagging energy. Corbelli had neither tonight.

John Copley's 1991 production washes the Met stage in a sea of pinks and pastels. I know many people find the pepto-bismol tones unbearable, but in its own way, the production works. It's traditional for Nemorino's to do their own schtick anyway, regardless of the production. But maybe it's just the eternal, ageless loveliness of Donizetti's opera that does the trick. This is an story about simple people in love, and it inspired Donizetti to write one of the most heartfelt valentines of all time. I like how both Adina and Nemorino grow up in this opera -- Adina starts out frivolous and a bit of a flirt. Nemorino is besotted and endearing but has no game. The "elixir of love" is really two people learning tricks from each other -- Nemorino learns how to play hard to get, and Adina learns to be sincere. The odd couple meet each other somewhere in the middle. Lovely opera, lovely performance.
at March 22, 2012 3 comments:

The Paul Taylor Dance Company is back in town, but this time they're using the Koch Theater due to NYCB's off-season and the NYC Opera's eviction from the theater last year. Their triple bills are always surprising, delightful, thought-provoking, and most of all, a reminder that Paul Taylor is maybe the last choreographic genius who is still alive, running his own company, choosing his own dancers, and supervising his dances. He's a national treasure and when he comes out for his curtain calls at the end of performances there's always a bittersweet feeling that it might all come to an end.

The triple bill this afternoon started with the stunningly beautiful Roses, set to Wagner's Siegfried's Idyll and Heinrich Baermann's Adagio for Clarinet and String. It starts off with four couples, the women dressed in black, the men in gray, as they move to the strains of Wagner's Siegfried's Idyll. At times Roses looks like something Balanchine could have choreographed, as the women swoon into the arms of the men. At other times, it incorporates some Taylor favorites, like cartwheels. A common theme is one partner cartwheeling over the body of his or her partner. The Idyll builds to a climax, and then, when one expects the dance to be over, a couple in white walk onstage to the considerably calmer, more serene Adagio. I could be wrong but I thought Roses perhaps depicted the natural progression of courtship. At first, the couples are full of passion. The final couple in white represents the more stable, mature phase of a romance that often marks a formal marriage.


The second dance on the program was Gossamer Gallants. This is one of the lighter Taylor pieces. It's set to the bouncy music of Smetana's Bartered Bride, and depicts the mating rituals between insects. The program includes this quote: “The nocturnal radiance of the fire-fly is purposely intended as an attraction to the opposite sex … some insect Hero may show a torch to her gossamer gallant”—Herman Melville. At first the male fireflies dance, and they are enthusiastic and preening, Then it's time for the female insects, whose flirty demeanor belies their fierceness. By the time the male insects and female insects dance, it's clear the males are no match for the females. The dance ends with the men exterminated, being dragged around onstage by the triumphant female insects. It's a delightful and disturbing dance, one that had the audience laughing and wincing at the same time.

The program ended with the well-known masterpiece Promethean Fire, an intense dance Taylor commissioned in honor of 9/11. Perhaps the most striking image of the dance was all sixteen bodies, piled on top of each other, as in a heap of ashes. That being said, I saw the company do this last year, and the central duet was much more strongly danced last year by Annmaria Mazzini and Michael Trusnovec. My friend Bill and I both remembered a moment when Mazzini literally threw herself backwards towards Trusnovec and the the audience gasped. The central couple this year were Robert Kleinendorst and Parisa Khobdeh. Khobdeh lacked the breakneck speed of Mazzini, and Kleindendorst lacked the incredible upper body strength of Trusnovec, and as a result, the same duet had a more muted effect. I saw the same backwards dive, but it looked careful and rehearsed and as a result, didn't have the same impact. The series turns the male does with the female wrapped around his neck and shoulders also didn't have the same speed. Still a great piece though, stunning to watch from beginning to end.
at March 17, 2012 2 comments: 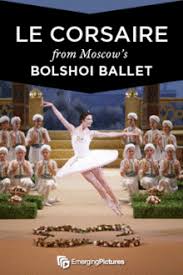 Watching the Bolshoi's Le Corsaire is sort of being like treated to a four-hour extravaganza of the sweetest, thickest pastries. It's delicious and fun at first, but by the fourth hour, you feel sick.

I've never been able to make sense of the plot of Le Corsaire, and I have seen this ballet a surprising amount of times both live and on video. Something about pirates and slave girls and a pasha and his harem. The score is stitched together from six composers, and various choreographers. The current Bolshoi production is one of those reconstructions where some attempt has been made to restore long-lost music, mime, and old-fashioned Petipa-era costumes. The ballet certainly has a plethora of opportunities for dancers at every level of the company, and it's a lot of fun, but as I said, this production drags on for way too long and my interest totally sagged by Act III. I saw this production live when the Bolshoi toured to Washington D.C. a few years ago, and had the same reaction.

For last night's premiere of L'elisir d'amore, I wrote for parterre, and my full review can be found here. Needless to say I enjoyed the performance very much, and recommend it highly.
at March 06, 2012 No comments:

Yesterday a young soprano named Latonia Moore made her debut at the Met, subbing for Violetta Urmana in Aida. It was the broadcast performance, heard around the world. Normally I'd write a wall of text, but in this case, I'll just let the singing speak for itself.