Showing posts from June, 2016
Show all

Ferri and Cornejo, photo @ Andrea Mohin On Thursday June 23 the Met was packed to the rafters with balletomanes for an Event of the Season: beloved ABT ballerina Alessandra Ferri's return to the stage in her signature role of Juliet in MacMillan's Romeo and Juliet . Ferri retired in 2007 but sort of unretired and this was the sort of splashy I'm Back moment that draws out every hardcore balletomane in the city. Ferri's entrance as Juliet was electric -- when she emerged from behind the curtain and jumped in the Nurse's lap the audience cheers were so loud the music was completely drowned out. At the end of the evening Ferri and Herman Cornejo (the Romeo) were called out again and again for thunderous ovations. The audience totally lapped up everything about the evening. Me personally? I hated it. I hate myself for hating it and thought throughout the evening -- why am I being grouchy? What's wrong with me that I can't appreciate such a touching retur
Post a Comment
Read more

The King and I PSA: Mazzie and Kim are Something Wonderful

Mazzie and Kim Lincoln Center Theater's production of The King and I is  will close  on June 26. Sales slumped after the original leading lady  Kelli O'Hara  departed the show. However good word of mouth convinced me to see the second cast last night -- Marin Mazzie as Anna and Daniel Dae Kim as the King of Siam. My reaction: this is a PSA. If you love this musical, if you love Broadway classics, if you love theater, PLEASE snatch up tickets to the remaining shows. I doubt I'll ever see such a dynamic TKAI pairing as Mazzie/Kim in my lifetime. They were simply magical.
Post a Comment
Read more 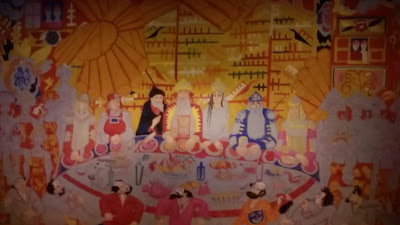 Front drop for Golden Cockerel, taken by moi Ratmansky's Golden Cockerel opened at ABT last night. Ratmansky's ballet is "inspired" by Mikhail Fokine's ballet for the Ballet Russes which starred Tamara Karsavina and Fokine himself (pictured below). Ratmansky first staged  Cockerel  in 2012 for the Royal Danish Ballet but supposedly added more dance for the ABT version. Richard Hudson's colorful sets and costumes are loosely based on the original designs by Natalia Goncharova. The auditorium was fairly full but I think audience reaction was mixed at best and muted at worst. There was an angry heckler at the end of the ballet, who kept shouting "EVIL," seemingly impervious to the fact that the whole ballet was, in fact, a satire of Russian rulers.
Post a Comment
Read more
More posts