Showing posts from March, 2017
Show all

Hello Bette, Goodbye Glenn, and Love is for Sale

Bette Midler in Hello Dolly! Photo @ Julia Cervantes This was a big Broadway blitz for me. On Friday evening, I attended City Center's Encores! presentation of Cole Porter's   The New Yorker's .  A day later it was time for Divine Miss M (aka Bette Midler) and the highly publicized revival of Hello Dolly ! Finally I watched Glenn Close get ready for her closeup in the revival of her star vehicle, Sunset Boulevard .
4 comments
Read more 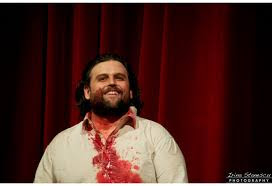 A little more than three years ago Jean François Borras got a last minute call to step in for an ailing Jonas Kaufmann. It was his first ever performance of Werther , and I remember being stunned at the beauty of his voice, the sensitivity of his portrayal, and his musical, idiomatic style.
Post a Comment
Read more

Grigolo and Leonard, photo @ Marty Sohl I caught the matinee performance of Werther this afternoon. My last experience with Werther had been the memorable series of performances with Jonas Kaufmann  where Kaufmann was showered with confetti at the curtain calls.  (I had no idea that this would be the last time Jonas Kaufmann ever performed in NY.) This afternoon's performance was more sparsely attended -- rows of orchestra seats were empty. If I wanted to I could probably list about 1,000 things wrong with Vittorio Grigolo's performance in the title role. Not idiomatic, too veristic, overwrought to the point of hamminess (he let out a huge scream before his suicide), overreliance on a few vocal effects and mannerisms. But when judging Werthers, there's only one factor that matters. Did he break your heart? And by that measure, Grigolo was an unforgettable Werther.
Post a Comment
Read more

Yoncheva and Fabiano, photo @ Marty Sohl The Willy Decker production of La Traviata opened at the Met in 2010. I saw the first cast and every revival since. That's a lot of little red dresses. All the Violettas I've seen brought something special to the role. However I had never experienced a complete Traviata -- one where ALL the singers came together to create an unforgettable, moving experience. Until last night, that is.
4 comments
Read more
More posts