Showing posts from September, 2018
Show all

Netrebko and Rachvelishvili face down, photo @ Marty Sohl In recent years, the NBA has gained a renewed interest. Maybe the most intense since the days of Michael Jordan. Why? Because NBA fans know that every spring, there will be a thrilling facedown between Lebron James and Stephen Curry. Two equally amazing players doing what they do best, and throwing down season after season. It's great for the sport. In an ideal world Verdi's Aida is supposed to be a throw-down between Lebron and Steph-calibre singers. The battle of wills between Aida the Ethiopian princess and Amneris the Egyptian princess when done right is thrilling, edge-of-your-seat drama. Unfortunately it's been a long time since we've had performances where the Aida and Amneris have been equally matched. Well we finally got that match. Anna Netrebko and Anita Rachvelishvili are two prima divas of the stage. Their voices are huge and soaring and overpower the chorus and orchestra. Their temperaments a
11 comments
Read more

Our Samson and Delilah, photo @ Ken Howard When I was a kid I used to watch Cecil B. DeMille's The Ten Commandments every year it was on TV. I didn't watch it because I was religious or because of the special effects. I watched it because it was so darned funny . Nefertari (Anne Baxter) shimmying in her see-through gowns for Moses (Charlton Heston) while fending off the conjugal advances of Ramses II (Yul Brynner) will never not be funny. Eventually I watched a bunch of those Biblical epics and they were all great, kitschy fun. I mean in The Ten Commandments , could we really live without lines this this: Nefretiri : You will be king of Egypt, and I will be your footstool! Moses : The man stupid enough to use you as a footstool will not be wise enough to rule Egypt. Maybe it was for that reason that the Met's new production of Samson et Dalila   was so enjoyable. This despite the fact that we had an ailing Samson (Roberto Alagna) who sang with a curtain announce
3 comments
Read more

NYCB Recovers After a Summer of Scandal 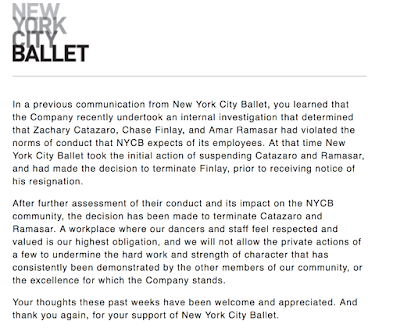 To say this has been a tumultuous summer for NYCB is an understatement. In late August, there was the news that three of NYCB's principal males were involved in some sort of scandal. Chase Finlay resigned, and Amar Ramasar and Zachary Catazaro were suspended without pay for the rest of 2018. Then in September, an explosive lawsuit  came out in which Finlay's ex-girlfriend Alexandra Waterbury accused Finlay, Catazaro and Ramasar (as well as a NYCB donor/patron) of exchanging nude images of her and other company dancers without their consent. The texts apparently contained such charming phrases as "I bet we could tie them up and abuse them like farm animals." On September 15 NYCB terminated Ramasar and Catazaro permanently. In addition to this scandal former NYCB principal and SAB teacher Peter Frame commit suicide . And in the larger dance world, legends Paul Taylor and Arthur Mitchell passed away.
2 comments
Read more
More posts