Showing posts from December, 2016
Show all

December Warhorses, part four: Cats, and Yet Another Nutcracker!

Cats! photo @ Richard Termine Last year I took my mom to see The Lion King , which I decided would be the perfect momsical. This year I decided to extend the tradition. My mom will only see family friendly musicals. And so my mom, predictably, chose Cats (what else)? The reason: "I love cats." (She does.) A picture of the junkyard set So I took my mom to see Cats , and it was an even more perfect mom-sical. I never saw the original 1982 Broadway version but I've read that this revival (also directed by Trevor Nunn) hasn't changed much. The dancing and lighting effects do have a very 1970's  disco  jellicle ball feel to them. My mom has a hard time understanding dialogue in the theater. Cats is a pure song-and-dance extravaganza. There's almost no storyline or character development (even my mom said "I wish there was more of a story") but she loved the non-stop dancing numbers, the cool set (the stage and theater is decorated like an aban
Post a Comment
Read more 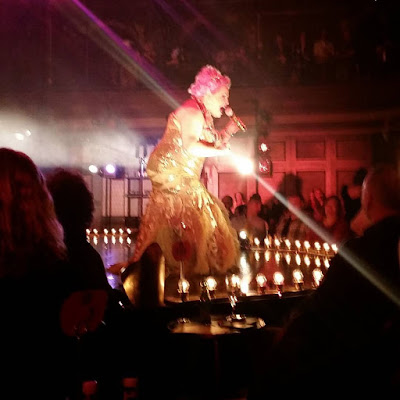 Shelly Anderson as the hostess of Nutcracker Rouge My December chestnut tour ended up with ... more Nutcrackers. Also, a visit to the Trocks. I didn't really enjoy the Trocks as much as I thought I would (despite their very funny Passages in Space , a parody of Merce Cunningham). The Dying Swan number was cute, I guess. But it really wasn't my kind of thing. So let's talk about those Nutcrackers. On December 22, I went to see Company XIV's wonderful Nutcracker Rouge . It's now in the Irondale Theater in Brooklyn (tucked away by a church) but it's still the same great show it was last year, with a few changes here and there. Austin McCormick's skill at putting together a cohesive entertainment from a company of such eclectic talents is amazing. There's been some turnover ( Laura Careless is no longer with the company -- Allison Ulrich danced Marie Claire this year) but the mainstays are still there -- Shelly Watson as the hostest/cabaret singer,
Post a Comment
Read more 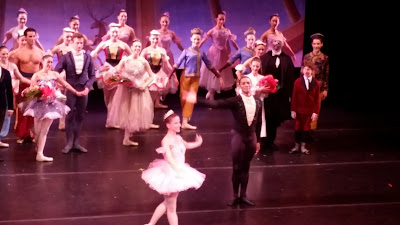 Abi Stafford in Yorkville Nutcracker My tour of December warhorses has predictably resulted in more Nutcracker-ing. I did another round at NYCB with a different cast, and then headed over to the Yorkville Nutcracker . Yorkville Nutcracker first: Francis Petrelle's Nutcracker is one of those "locally-based" versions. In this case, it's set in 1895 in Gracie Mansion and all the characters are historical people. The heroine is "Mary Strong," daughter of NYC mayor William L. Strong . The dancers are culled from a variety of sources but the kids are mainly of Ballet Academy East. If you're expecting a super-professional high-calibre Nutcracker you're likely to walk away from Yorkville Nutcracker disappointed -- the students and professional dancers are at varying degrees of ability, the production values consist of three different painted backdrops, and the music is recorded.
2 comments
Read more
More posts