Showing posts from January, 2017
Show all

Teresa Reichlen and Daniel Ulbricht in Prodigal Son, photo @ Andrea Mohin The first week of Winter Season at NYCB is usually low-key. The company is tired from the Nutcracker marathon and also rehearsing for the inevitable world premiere of some new works. So the programming tends to be basic Balanchine. Stuff the audience knows and loves. Dancer-proof ballets. And thus it was so this winter season. The first week was dominated by two excellent Balanchine triple bills: a "Balanchine Short Stories" program of La Sonnambula / Prodigal Son / Firebird and a more eclectic program of Allegro Brillante / Swan Lake / Four Temperaments . I saw one of the AB/SL/4T's performance and two "Short Stories." I don't need to tell you that Tiler Peck was amazing/super/stupendous in Allegro , and that her diagonal of consecutive triple pirouettes that was timed to end exactly with a CRASH in the piano chords gave me goosebumps. Andy Veyette was her fine, steadfast pa
Post a Comment
Read more

Obama, no longer president, but always My President 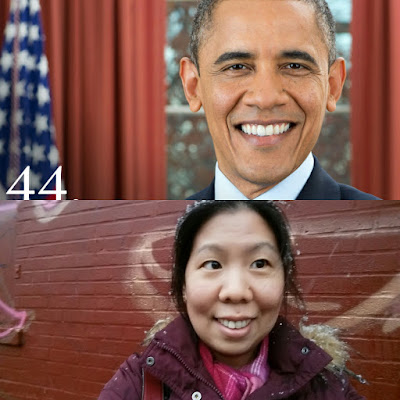 Side nose moles FTW! It's hard to believe that in less than 24 hours Barack Obama will no longer be POTUS. He's a man I admire so much as a person, as a politician, as a leader, as a role model.  He never lost his dignity, his cool, and (most importantly) his humanity. Other people have expressed their admiration more eloquently. I'll just say this: Barack Obama might no longer be the President of the United States, but he'll always be My President.
Post a Comment
Read more

Grigolo and Damrau, photo @ Ken Howard Romeo and Juliet are in the crypt. Romeo succumbs to the poison just as Juliet awakens from her self-induced slumber. Juliet stabs herself so she can die along with Romeo. Bodies slump over each other. Curtain. That's what happened last night at the end of the Met's new production of Gounod's Rom é o et Juliette . It's basically what happens at the end of any presentation of Shakespeare's play. Tragic. Heartrending, right? But as the lights dimmed I felt something I haven't felt while attending an opera in a long time: happiness. Yes, happiness. Why? Because the performance last night was pretty much perfect. Not perfect in the sense that there were no flaws with the singers (there were), or that the production by Bart Sher was mind-blowing (it wasn't), but the energy from the star-crossed lovers (Vittorio Grigolo and Diana Damrau) was such that all flaws and reservations were swept aside in by the force of the
7 comments
Read more

Candide - Not the Best of All Possible Presentations

Candide on paper looked like the perfect opera to revive for New York City Opera's "Renaissance." The old NYCO's Hal Prince production (adapted from his Broadway version) was one of the company's glories. Bernstein's lovable operetta was a perfect fit for the uniquely American sensibilities of the company. So to bring back that wonderful production, with the same revered director supervising, well, that was the best of all possible worlds right? Wrong. For one, the limits of the tiny Rose Theater made it necessary to scale down Hal Prince's production to what looked like the Dollar Store version. Same familiar circus-performers concept, but tiny, cheap drops that wrinkled and flapped, an awkward miking system that made the voices sound thin and inaudible but the set changes and stage movement ear-splitting, and a cast that was obviously under-rehearsed. Prince (and choreographer Patricia Birch) seem not to have gotten the memo however -- the tiny stag
4 comments
Read more
More posts