Showing posts from November, 2019
Show all

Jessye Remembered (An Excuse to Play Lots of Jessye Videos) 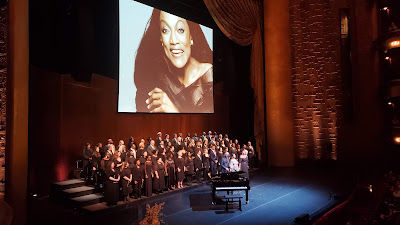 Jessye Norman Memorial Sunday, November 24th was a sleepy, rainy afternoon. But the Met auditorium was packed to the brim for a sold-out memorial dedicated to the late, great soprano Jessye Norman . The memorial mixed personal reminisces with musical performances. It struck the right notes between a somber reverence for Ms. Norman and a joyful celebration of her life.
Post a Comment
Read more

An Evita That Will Sort of Make You Cry?

Solea Pfeiffer as Eva Peron, photo @Sara Krulwich For the second time in a week I've seen an operatic work about a highly polarizing historical figure. Last Friday I saw Philip Glass's Akhnaten and tonight I saw New York City Center's production of Evita . I've never actually seen Evita live before. I can't believe I'm using Andrew Lloyd Webber and Tim Rice as examples of skillful dramaturges but Evita was everything that Akhnaten wasn't. Tim Rice was not afraid to paint his own picture of Eva Perón which mixed fact with fiction. Webber's music portrays the different facets of Perón-- her naked ambition in "Goodnight and Thank You" and her shiny charisma in the anthem "Don't Cry for Me Argentina." So I know that Philip Glass is a much superior composer to ALW, but Evita was engaging in all the ways Akhnaten wasn't.
Post a Comment
Read more

Anthony Roth Costanzo as Akhnaten, photo @ Karen Almond The Met company premiere of Philip Glass's Akhnaten  is generally considered to the one of the Events of the Season (the other was Porgy and Bess ). Performances are sold out, the opening night got rave reviews , and so despite lingering pain from an ankle injury, I trudged to Lincoln Center.  I had very high expectations. Akhnaten  (1984) is the last opera of Philip Glass's "Portrait" trilogy. The others are  Satyagraha  (about Mahatma Gandhi) and  Einstein on the Beach  (about, well, Einstein). Akhnaten in the14th century B.C.E. upended the ancient Egyptian religious system for a monotheistic religion that focused on the sun-god "Aten." For the libretto of  Akhnaten  Glass drew upon primary sources from the Amarna period. He even insisted on presenting most of the opera in ancient Egyptian with no surtitles.
3 comments
Read more

Sesame Street turned 50 this week. The beloved children's television program has made kids laugh and learn for half a century. In addition to teaching kids the alphabet, phonics, basic math and some Spanish  Sesame Street has never made any bones about pushing a larger social message of inclusiveness and cultural education. The show takes place on a large urban street and the characters reflect the diversity of NYC. The furry monsters co-existed despite having their own personalities, quirks, and (this is important) different fur color. Sesame Street did not dumb down its material for children -- its skits taught children not just the ABC's but how to settle conflict, how to express affection for each other, and how to deal with difficult issues like death. They even had an episode that addressed 9/11 . But you already knew all that. What I didn't realize was the wonderful arts tributes  Sesame Street included over the years. I went on YT and found a goldmine.
4 comments
Read more

Lifar and Danilova in the original Apollon Musagete The recent death of Alicia Alonso led me down the Youtube rabbit hole and I discovered, among other things, a Cuban version of Balanchine's seminal masterpiece Apollo . I am well aware of the various changes Balanchine made to Apollo in his lifetime from its premiere in 1927 to his death in 1983. The most drastic change was his last change -- he cut the birthing scene and the final ascent up the stairs to Mount Olympus.
3 comments
Read more
More posts