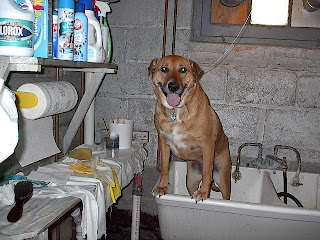 Our family dog Cricket passed away on April 10. She was two days shy of her 15th birthday. She went  suddenly and painlessly, just lay down and never woke up. Sweet and obedient to the last, minutes before she died she had gone outside to go to the bathroom.

We first saw Cricket in an animal shelter when she was a puppy. She was in a litter of 6, but she ran to the bars of the cage and started wagging her tail frantically. Our family decided that she was the one. At the time she was still too young to be adopted, so we called the shelter almost every day to see when she'd be ready. We talked about almost nothing else. I still remember the day I came home and my dad said "Look inside" and there was Cricket, in a cardboard box. She ran up to me and started licking me and it was love at first sight.

Cricket had no special talents -- she never was good at learning the tricks beyond a few basic ones like "shake hands," and "roll over." But one trick she did learn was when I told her to wag her tail, she wagged it. Over the years, I'd tease her by asking her to wag her tail when she was sleeping. When I did this she sighed, and then lifted her tail slowly for one quick wag, before falling back asleep.

Cricket's main trait was her almost ridiculous sweetness. If Cricket had been a person, people would have either been confused that someone could possibly be that nice or convinced that she must have been a real fake, to be that nice. As it was, she was a dog, and everyone knows that the average dog is about 1000x nicer than the average human. She didn't have a mean bone in her body, and wanted to be friends with the whole world. She remembered people too. When she went to the vet's office, she ran around the office greeting her old friends, all of whom squealed "Cricket!!!!" She never lost her joie de vivre -- even towards the end of her life if a kid said "doggie" she wagged her tail and panted in excitement. When visitors came to our home she hogged their attention until they spent more time cooing over her than doing anything else. People who said they weren't "animal people" were won over by her charm offensive. Once my elderly aunt visited. They were all going out for a walk in the park. Everyone was already in the car, but my aunt was still in the house, tying her shoelaces. Cricket jumped out of the car and ran back in the house to wait for my aunt. My aunt never forgot this moment. Even my cranky cat Pumpkin learned that Cricket was harmless and the two of them got along. 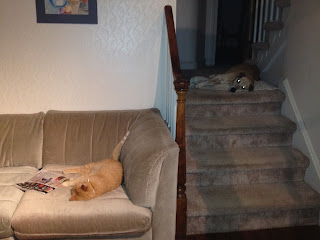 One time I got some very upsetting news. I was in my room and Cricket heard me on the phone. By then she was old and arthritic and had difficulty climbing stairs. But she must have heard that I was upset, and she lumbered up the stairs into my room, and just stood by the doorway. She didn't let anyone enter -- she knew that when I'm upset, I need my space. She just stood guard for what seemed like hours and growled at anyone who tried to enter my room. It was the only time I ever heard her growl.