Showing posts from July, 2016
Show all

A Winter's Tale in a Summer Festival

Dronina and McKie in A Winter's Tale, photo @ Karolina Kuras The dog days of summer are often the worst time for balletomanes. The home companies' seasons are over, and the days of huge summer-long tours by the Bolshoi/Mariinsky/Royal Ballet are increasingly rare. It was thus that I found myself plunked down for a ballet (Christopher Wheeldon's A Winter's Tale as part of the Lincoln Center Festival) that I really had no desire to see. Hey, as I said, slim pickings. I was already familiar with A Winter's Tale from the Royal Ballet video . I found the ballet slickly produced but unmoving, like so much of Wheeldon's work. But in that video I admired the demented, intense performance of Edward Watson as Leontes (sort of doing a Prince-Rudolf-in- Mayerling -lite) and also the matriarchal, authoritative Paulina of Yenaida Zenowsky. The National Ballet of Canada's 7/29 performance (it runs from 7/28-7/31 with multiple casts) had none of the excesses of the
2 comments
Read more 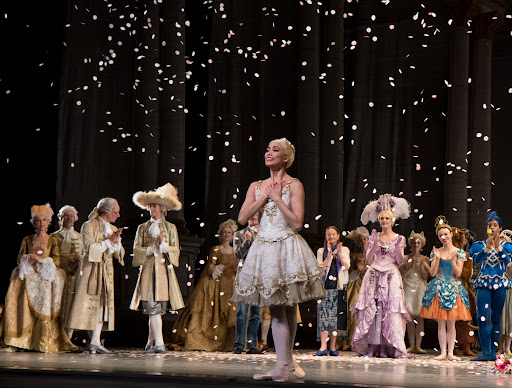 Stella celebrates 20 years with company, photo @ Kent G. Becker Last night Stella Abrera celebrated her 20 years with ABT with her company debut as Aurora in Ratmansky's Sleeping Beauty . She wasn't technically perfect, but she was exemplary, as she is in anything she dances. Abrera is one of the rare Auroras who grows in each act. In her birthday party she's bubbly and excited, in the Vision Scene seemed ethereal and elusive, and finally in the Wedding Scene she was regal and even a bit aloof. Abrera is now 38 -- one wishes ABT would have allowed her to dance Aurora years earlier. As it is there were some concessions to age and time -- her Rose Adagio balances were not the longest and most secure (although she didn't really wobble noticeably) , and she seemed to have a few issues negotiating the petit batterie right before the start of the Rose Adagio. What sets Abrera apart from the rest of the ABT ballerinas is her almost Russian carriage in her upper body -
3 comments
Read more
More posts