Showing posts from June, 2017
Show all

The Divine Miss M(urphy) in Hello! Dolly, and Bandstand 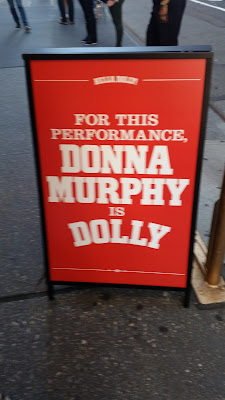 So last night I saw Hello Dolly! with the Divine Miss M and didn't have to donate a kidney! Of course the Divine Miss M in this case was Miss M(urphy). Some people in the audience muttered that they wanted to see Midler (I guess the sign to the left didn't tip them off?). But once Donna Murphy stepped off that trolley and started singing, I think the entire audience was like "Bette who?" Donna really sang the living daylights out of a role that's often associated with divas of a certain age with a limited vocal range. She can belt, she can interpolate high notes, she can sing while doing all sorts of physical comedy, in other words she was absolutely amazing! It was one of the most joyous nights in the theatre that I've ever experienced. It's not really fair to compare the rest of the cast to how they were in March . That was early in previews and they were still figuring out what worked, what didn't, and the comic timing. What I can say thoug
Post a Comment
Read more 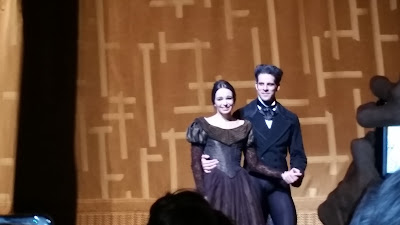 Diana and Marcelo's curtain calls Tonight ABT bid farewell to one of its most beloved artists. After the fraught finale of Cranko's Onegin  the sold out crowd screamed and yelled their appreciation for Diana Vishneva. Her longtime stage partner Marcelo Gomes hugged and comforted her. Confetti streamed down from above, the stage was covered in flowers, ABT colleagues marched onstage with hugs and more bouquets, and Diana looked simultaneously sad and elated as she basked in the love of the audience. Oh yeah, Diana's husband also made an appearance. The Diana and Marcelo Lovefest Curtain Call Routine was dialed up an extra notch tonight. He swung her around in an embrace as confetti fell. He fell to his knees in obeisance and she fell to her knees in response. She cried, they kissed, they nuzzled. It's really the Show After the Show. Usually I find their routine cloying, but this was her farewell, so it was almost cute.
5 comments
Read more 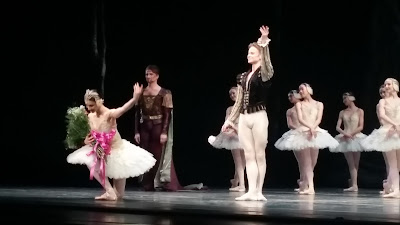 Sarah Lane and Danil Simkin Last night Sarah Lane made a last-minute substitution for an injured Maria Kochetkova in Swan Lake . This was Sarah's New York debut in the role, and after a banner season where she's triumphed in Ratmansky's Whipped Cream and Giselle , the buzz and anticipation in the sold-out auditorium was high. It was generally thought that if Sarah could bring down the house as Odette/Odile, a promotion to principal would happen. Odette/Odile is not as natural of a fit for Lane as Giselle. Sarah Lane doesn't have a physique that screams "swan." She's petite and her limbs are beautifully proportioned but not elongated. Her extension is decent but without the height and dimensions she did not fit the aesthetic of the traditional Swan Queen. Also, she's a natural allegro dancer with fast limbs and quick footwork. ( Whipped Cream took advantage of this to an absurd degree.) The drawn out adagio movements of Odette were sometimes cli
5 comments
Read more

Danil Simkin as Lankedem Over this week I attended a mishmash of performances. They ranged from good to mixed to awful. Let's start with the good: a fun, entertaining performance of Le Corsaire from ABT. This season at ABT the principal women have been falling like flies due to injury (currently, Isabella Boylston, Veronika Part, Gillian Murphy and Maria Kochetkova are on the DL list). What this has meant is lots of opportunities for soloists, and the 6/8 performance showcased the talents both of veteran soloist Sarah Lane (Gulnare) and the newer Skylar Brandt (Medora). These two talented ladies managed to grab attention away from the men, whose pirate's chest full of ballet tricks usually dominate the ballet. Skylar Brandt is a winning combination of technique, charm, and beauty. She has a natural stage face -- her large eyes capture the light. Her technique is formidable -- in act one her solo had attitude turns followed by triple pirouettes. You can see how strong h
2 comments
Read more
More posts