Showing posts from April, 2019
Show all

Hadestown, aka Orpheus and Eurydice, the Opera

The myth of Orpheus and Eurydice inspires great operas. There's Monteverdi's L'Orfeo , Gluck's Orfeo ed Euridice (or Orphée et Eurydice ), Offenbach's parody operetta Orpheus in the Underworld , and now to that list we have to add Anaïs Mitchell's Hadestown . Because make no mistake -- Hadestown might be playing at the Walter Kerr theater and be advertised as a musical, but it is an opera from curtain to curtain. Its appeal lies not in the usual musical theater tropes but in its operatic scope and scale. This is a work that goes from the heart to the heart.
Post a Comment
Read more

The Carney clan, photo @ Joan Marcus I recently finally saw The Ferryman , Jez Butterworth's lauded play about the fortunes of a large Northen Irish family in 1981. The play received near-unanimous acclaim in both the West End and Broadway. It won a bunch of Oliviers and seems on track to pick up a bunch more Tony's. I didn't see the original "Irish" cast that opened the play, but the replacement American cast. There are some OBC holdovers, like Fionnula Flanagan as Aunt Maggie from Far Away and the brood of Carney children.
1 comment
Read more

Oklahoma! - Violence as American as Chili and Cornbread 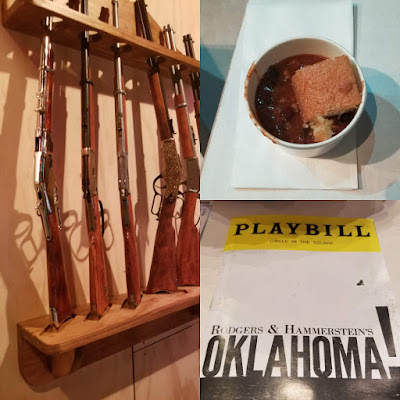 The rifles, the chili, the playbill The new Oklahoma! playing at Circle in the Square (after a highly successful off-Broadway run at St. Ann's) starts off sunnily enough. Laura Jellinek's set design is homey and rugged at the same time -- the stage is filled with bright wood picnic benches and where I was seated (right on the floor of the stage) there was a hot pot of chili brewing in front of me. But the walls were lined with rifles. Almost the whole first act played without the usual dimming of the house lights. The ruggedly handsome Damon Daunno (looking a bit like Sun Records-era Elvis) strums his guitar as he launches into a disarmingly casual, country/ bluegrass rendition of "Oh What a Beautiful Mornin'."
2 comments
Read more

New cast of Traviata, photo @ Ken Howard When Michael Mayer's new La Traviata production starring Diana Damrau, Juan Diego Flórez, and Quinn Kelsey premiered last December  it was quite the hot ticket. Performances were sold out, and there were fierce online debates about the merits and demerits of Mayer's rather traditional production compared to the previous Willy Decker production. What a difference a few months make. The spring revival with a brand new cast premiered tonight and while it was has fine voices there were many empty seats in the house and each act had more attrition. And truth be told, it was a rather sleepy performance that never took flight.
2 comments
Read more
More posts