Showing posts from April, 2018
Show all

Met Season Wraps Up with Tosca and Cendrillon

Netrebko, photo @ Ken Howard Unless something major happens tonight was my last performance of the Met 2017-18 season. The role debut of Anna Netrebko in Tosca has created such hype that tickets are completely sold out for every performance standing room included. In addition there was buzz because the original Cavaradossi (Marcelo Alvarez) canceled and Yusif Eyvasov aka Mr. Netrebko was predictably the replacement. This is the NY debut of the Mr. and Mrs. together in an opera. In other words this was an Event. The people sitting next to me had traveled from Israel just to see Anna as Tosca. So ... how did the performance stack up against the hype? Pretty well, all things considered. Anna Netrebko is a Superdiva and Tosca is a Superdiva and the singer and the role were well-matched both musically and temperamentally. Netrebko's voice has grown so much in volume and richness but lost a lot of flexibility. I saw a recent video of her Lady Macbeth in London and while it was
8 comments
Read more 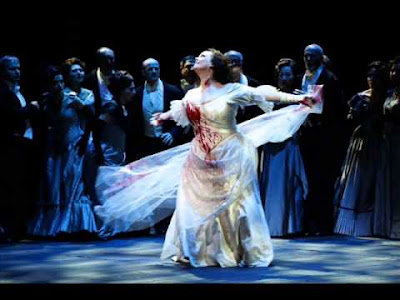 Jessica Pratt as Lucia Yesterday I went to the matinee performance of Luisa Miller . I expected it to be wonderful, and it was. Everyone had settled into their roles more than at the premiere , and the love of the audience seemed to give the singers an extra jolt of energy. The death scene between Sonya Yoncheva and Piotr Beczala was gripping and Domingo was so heartfelt and still offers a master class in Verdian style that one could forgive the occasional lack of, well, baritonal voice. It was a beautiful afternoon and I'm glad the performance was captured for HD. Then after it was over I decided to impulsively buy a ticket for the evening's Lucia di Lammermoor . I'd heard good things about the Lucia, Jessica Pratt. And this was alas one of her only two performances this season. It was unlike Luisa Miller a gamble, as I really hadn't heard much of her besides a few Youtube videos. And I think most of the audience was unfamiliar with her too, as the auditorium w
4 comments
Read more

A Tristan und Isolde Where King Marke Provides the Music-gasms? 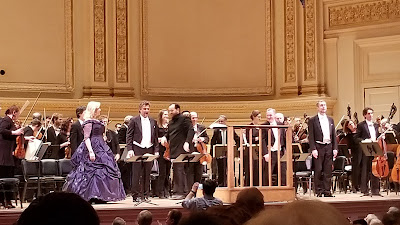 Nylund, Kaufmann, Nelsons and Zeppenfeld The hottest ticket in town this opera season was no doubt the Boston Symphony Orchestra's concert performance of the second act of Tristan und Isolde . By 8:00 Carnegie Hall had turned into several snaking crowds of ticket holders, bathroom visitors, scalpers, all converged into an auditorium that all of a sudden seemed tiny and cramped just because of the sheer volume of people present. The ambience of the audience resembled My Fair Lady's Ascot Gavotte: Ladies and Gentlemen   Ev'ry duke and earl and peer is here   Ev'ryone who should be here is here.   What a smashing, positively dashing  Spectacle: the Tristan op'ning night. The hype was for several reasons: the elusive tenor Jonas Kaufmann was actually fulfilling his engagements (who would have thought I'd see him  TWICE this year?), Andris Nelsons is a buzzy, rather hyped conductor, and Wagner ever since Peter Gelb took over has occupied less and l
7 comments
Read more

A Loverly Revival of My Fair Lady 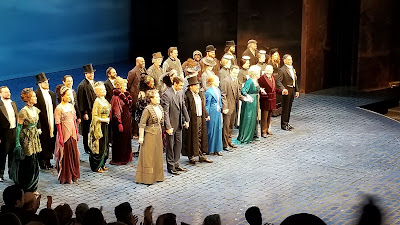 The cast at curtain calls About three weeks ago I saw the Lincoln Center Theater's revival of Lerner and Loewe's  My Fair Lady . Back then it was in the first week of previews. I saw a lot of promise and potential but it was obvious that the production was still in an embryonic stage. Actors were going up on lines, timing was off, and the pacing was slow and ponderous. The performance read more like a serious play than a classic musical comedy.
Post a Comment
Read more

Easter is for Musicals: Carousel and Jesus Christ Superstar 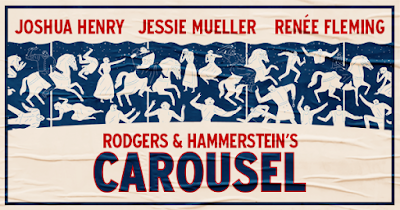 Regular readers of this blog might know this already but every year I take my mom to a carefully picked, PG-rated, old-fashioned musical (the only type my mom will go to). I call them momsicals. We've been to Lion King , Cats , Phantom of the Opera,  and  Hello Dolly!. When I asked her what the next Momsical would be, she said "Carousel." She was adamant about it too, so on April 1 we went to see the new Broadway revival of Carousel .
12 comments
Read more
More posts