Showing posts from January, 2016
Show all

de Luz, Angle, Ramasar and Pazgocuin in Fancy Free, photo by Michael P. Farrell The first two weeks of the NYCB's Winter Season are usually favorites for hardcore fans. After a month of Nutcrackers and Alvin Ailey's Revelations New Yorkers are eager for the "real ballet" to start again. I usually find myself snatching up tickets right and left in the first two weeks of the season. This year the blizzard on the annual "Saturdays at the Afternoon with George" canceled two planned shows. Even so, I attended four performances in their first two weeks.
Post a Comment
Read more

Company XIV's Snow White - The Fairest Show of Them All 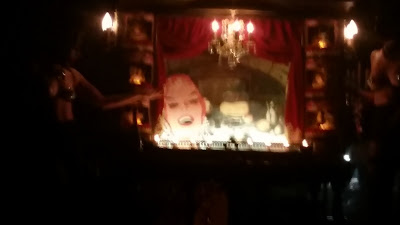 Who is the fairest of them all? Warning: This review has spoiler alerts The original Grimm fairy tales were as grim as their namesake. They featured a stern, unforgiving morality in which evil was mercilessly punished. For instance, in Snow White the Queen Mother as punishment is forced to dance in hot burning shoes until she dies. Over the years ballets, Disney movies, Broadway shows, have all shaved the edges off these stories. People only think of "happily ever after" now. Well, one company has brought back the "Grimm"ness of these original Germanic tales. Company XIV's production of Snow White opened last night at Minetta Lane Theatre and it manages to be a great entertaining show AND a dark, perverse interpretation of this oft-told fairy tale. I already reviewed their wonderfully entertaining  Nutcracker Rouge  in this blog. I made a return trip to see their version of Snow White . As entertaining as Nutcracker Rouge was, Snow White is simply on a
4 comments
Read more 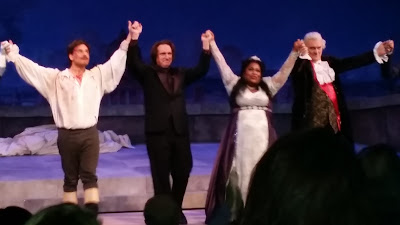 Cast of Tosca takes a bow The NYCO Renaissance kick-start got the most awful divine intervention: a 28" blizzard that cancelled two of its performances. But maybe it was a blessing it disguise,  because this afternoon's final matinee performance of Tosca found all the singers vocally fresh, and with a large enthusiastic audience (many of whom had switched their Saturday tickets). There's been a healthy dose of skepticism of the NYCO Renaissance project, and certainly its inaugural project was the definition of "playing it safe" -- does NYC really need yet another Tosca ? But you know what? This afternoon's performance had an energy and enthusiasm that many tired revivals of Tosca at the Met in recent years have sorely lacked. Was it a great production? No. Were the singers perfect? No. But it was a thoroughly enjoyable, well-sung performance, and many recent Met performances have failed to live up to even that low standard.
3 comments
Read more

Photo by Joan Marcus Recently my mom decided she wanted to see a Broadway musical. She hadn't seen one since Applause , which she says she saw with Anne Baxter*. (I googled -- Anne Baxter did indeed take over Lauren Bacall's part. Mom has a good memory.) I know my mom -- she only wants to go to "momsicals" -- classic tuneful scores with good singing and dancing. I knew anything raunchy or avante garde would be a no-no. I went over several options with her: Fiddler on the Roof, The King and I , Phantom of the Opera , and Lion King . My mom rejected Phantom : she had seen the movie and didn't like the "stalker" storyline. She rejected Fiddler as well: she didn't like the music. King and I she said "only should be done with Yul Brynner." But Lion King she was very interested in, so Lion King it was.
Post a Comment
Read more

Pearlfishers - Too Many Fish, Not Enough Pearls

Dames at Sea Sails Off

Dames at Sea cast, photo by Jeremy Daniel From a financial standpoint the revival of Dames at Sea at the Helen Hayes Theater was an unmitigated disaster. The show opened in October to l ukewarm reviews and sold poorly even in the 597-seat theater. This 1968 musical originally gained fame when a certain Bernadette Peters played Ruby and then shot to stardom herself, which echoed Ruby's storyline. But in the current revival it was unable to gain any traction, and today it played its final show, which I attended. At least the show got a good send-off -- the theater cheered loudly after every number.
Post a Comment
Read more
More posts