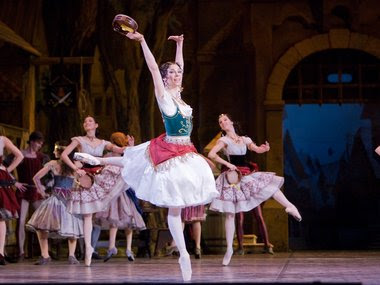 The Bolshoi's live in HD program continued this Sunday with a transmission of Esmeralda. Esmeralda is actually a very old ballet; it had its debut in 1844, with choreography by Jules Perrot and music by Cesare Pugni. It had numerous restaging, and was rechoreographed by Marius Petipa. It was a favorite vehicle of Mariinsky prima ballerina Mathilde Kschessinskaya, who used to take her own pet goat onstage. But the ballet fell out of the repertory, some showpieces aside, until it was revived by the Bolshoi Ballet in 2009. The reconstruction has taken out the "Esmeralda pas de deux" with the tambourine kicking variation, but has kept Agrippina Vaganova's "Diana and Acteon" pas de deux. Weird.

I don't know how much extant choreography is left and how much was recreated, but Esmeralda today seems rather old-fashioned. It has its moments, including the famous pas de six, and the interpolated Diana and Acteon pas de deux, but it also has long dull stretches. The first act is interminable, contains very little dancing, and about a third of the movie theater left before the second act. Pugni's music is pleasant but mostly unmemorable. It's very loosely based on Victor Hugo's novel, but of course Quasimodo is reduced to a side spectacle and the focus is on Esmeralda, the gypsy girl who loves a good-looking but shallow captain. The storyline has a very weird, contrived happy ending which involves someone who was fatally stabbed coming back to life. (In the novel there are no such miracles.) The costumes and sets are very pretty, as is often the case with reconstructions. It's never less than watchable, but I can see why this fell out of the repertory.

Maria Alexandrova is a strong technician with a nice, down-to-earth persona that's fitting for a gypsy girl. She has a buoyant jump, a great classical line, and an unpretentious way of dancing. But she's singularly unlyrical. Part of the problem is her look -- she's tall with a compact, block-like torso and no flexibility in the spine. Her face is a rather expressionless, vacant mask. But it's also the way she dances -- her style is too straightforward to really be poetic. In the famous pas de six, in which Esmeralda is forced to dance at the engagement party of the man she loves, I've seen ballerinas who made it seem as if their tambourines were weeping. Alexandrova brought no such vulnerability, and her unflexible spine and legs made the repeated arabesque penchee promenades look ugly.

Watch how the ballerina makes so much of the motion of letting her back and arms hang backwards, while rustling the tambourine. It was said that long after the affair with the Czar was over, Mathilde Kschessinskaya used to dance the Esmeralda pas de six with the Czar watching, and weep as life imitated art.

Alexandrova also has an irritating habit of rushing through the pantomime. This is an old ballet, and there's a lot of mime. It needs to be clear and expressive. It should tell a story. Alexandrova quite honestly looked like she was waving her arms around and directing traffic.

Ruslan Svortsov as Captain Phoebus really doesn't have that much to do besides look pretty and partner well, and he did both things. He has very nice-looking legs and feet. Ekaterina Krysanova was really delightful as Phoebus's fiance Fleur-de-Lys. She reminded me of a small elf in the way she darted around the stage, and finished off her variation with a very nice set of single-double fouettes. The unannounced Diana and Acteon were fabulous -- I just wish the program said who they were. Denis Savin as Gringoire and Igor Tsvirko as Quasimodo provided a welcome dignity to roles that are supposed to be somewhat secondary and clownish. The villain Frollo was given an appropriately hammy performance by Alexei Loparevich. One thing that the Bolshoi HD telecasts show repeatedly is how strong the company is in these supporting character roles.

After the HD I headed crosstown to catch the Charles Askegard farewell at New York City Ballet. I haven't been to City Ballet at all during their fall season. The farewell performance was not sold out, with even the Fourth Ring half-empty and half-empty rows littering the orchestra. It felt more like a private performance than a huge event. I saw Paloma Herrera, Hee Seo, and Michele Wiles during intermission -- they looked gorgeous! The performance was a rather eclectic selection -- the Diamonds pas de deux, Episodes, In Memory Of ..., and Western Symphony. I kind of wonder why Episodes and In Memory Of ... were chosen -- they're not really ballets I associate with a farewell gala. They're very grim and serious. Western Symphony provided the much-needed levity and festivity. His frequent partners (Maria Kowroski, Sara Mearns, Wendy Whelan) were all there, and perhaps in deference to their retiring partner, all danced very "small" today, very low-key.

At the end of the performance, all the City Ballet female principals came onstage to present Askegard with huge bouquets, and then the men were led onstage by Peter Martins to pay homage. Askegard was showered with confetti and bouquets, and I could see Maria Kowroski wiping away tears. It was a very nice way for City Ballet to end their fall season.
ballet Bolshoi Ballet live in HD Maria Kowroski NYCB performance review Petipa Robbins Sara Mearns Wendy Whelan