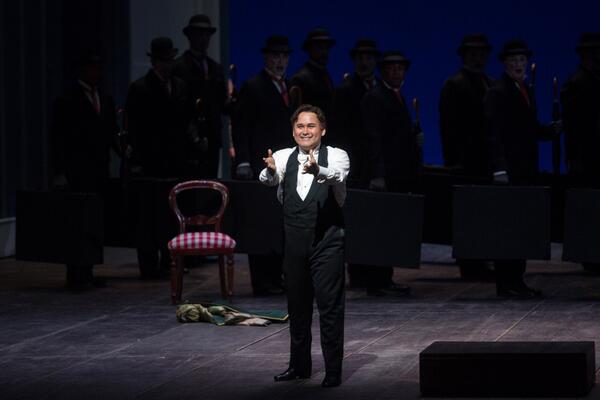 During tonight's absolutely amazing Cenerentola Javier Camarena finished "Pegno adorato e caro" with a long-held D followed by an even longer high C, the audience predictably started screaming, just like opening night. This time though, after it was clear the ovation would not stop, Camarena ran back onstage to acknowledge the applause. And then ... an encore!!! Yes it was planned because the chorus also ran back onstage and Luisi immediately cued the band, but he deserved it. You could see the joy on his face as he held an even longer D and C. This is a guy who just has to open his mouth and the audience is already screaming.

Yes, I think it's safe to say ... Javier Camarena is ready for his close-up.

p.s. And the rest of the cast was also much improved from opening night, if that's even possible. But they were much more relaxed with the comedy, Luca Pisaroni sounded GREAT (as opposed to opening night, when he sounded ... ), and Corbelli and Spagnoli absolutely chewed the scenery and gave a master class in how to sing and act opera buffa. Joyce DiDonato threw in even more crazy machine-gun coloratura in "Non piu mesta." It really was just one of those nights.
Javier Camarena Joyce DiDonato Metropolitan Opera opera performance review