Giselle at the ABT - Semionova and Cojocaru

Sometimes you really need to see a bad performance of a work to appreciate a great performance. I think I've always been spoiled when it comes to Giselle -- my very first Giselle was Diana Vishneva. Vishneva's portrayal is a modern classic -- her gothic intensity and sense of drama brings this tragedy to life. Since then I've seen Nina Ananiashvilli, Alina Cojocaru, Natalia Osipova, and Aurelie Dupont and Clairemarie Osta. Almost all of these ladies brought something special to the role. Dupont was a bit too cool for my tastes, Osta was at the end of her career and her technique sometimes lagged, Cojocaru always has trouble with the Spessivtseva variation, but whatever the case is, I never felt like I wasted my time and money at the theater.


The 6/17 performance of Giselle at the ABT was a perfunctory, sterile, completely unmoving performance. The leads were Polina Semionova and David Hallberg. Both are excellent dancers. Semionova is a tall, strong ballerina with excellent technique. And she sailed through each technical challenge of the role without any problems. In the Spessivtseva variation her hops on pointe across the stage were secure and fast, and the subsequent pique turns solid and centered. The initiation turns as a Wili were also fast and secure. In the grand pas de deux she lifted her leg to a developpe a la seconde with nary a wobble, and the backwards entrechats were crisp and well-articulated. It was as if she were conducting a master class of how to execute all the steps of Giselle without any strain.

But I didn't believe it for a second. Semionova exudes strength and maturity -- you could hardly believe this hearty young lass had a weak heart or even a broken heart. Not all Giselles have to be delicate -- Osipova certainly wasn't -- but they have to be something special. Semionova in every performance I've seen her in gives us the steps, perfectly executed. Nothing more, nothing less. She has no idea how to accent a step or phrase in anything but her usual clipped, staccato style -- at the beginning of the grand pas de deux her leg shoots up to the developpe like an arrow. Absolutely no sense of the leg floating through space. She did almost nothing with her arms -- they were held at a severe angle, without any Romantic softness. She made the whole second act seem almost happy and even funny -- yes, there were several times when the audience laughed. No sense of tragedy, it was as if she was checking off the boxes of the steps and nothing more.

Her partner was David Hallberg, who was an absolutely wonderful Albrecht when he danced with Osipova and Cojocaru. However, next to the torpid Semionova, Hallberg resorted to simply showing off his beautiful legs and feet, and doing little else. Whenever the action called for Albrecht to sprawl on the floor, Hallberg made sure his legs and feet were perfectly pointed. No sense of man being ordered to dance to exhaustion and then death. He skipped his usual (and jaw-dropping) entrechat-sixes for some diagonal brisés. I'm all for the brisés if someone can do them well. Hallberg was unexpectedly sluggish in them, without any sense that Myrtha was pulling him across the stage with her demonic authority. Semionova is a bit too tall for Hallberg to lift without effort -- the overhead lifts in Act Two looked effortful, and the illusion of ghostly weightlessness was lost. Hallberg has always been ice on stage -- his beautiful blue eyes, blond hair, and Apollonian body make him more divinity than mortal. Thus he needs a Giselle that is all fire.

Otherwise this was a typical night at the ABT, for better or for worse. Craig Salstein chugged through the peasant pas de deux with depressingly sloppy posture, while Yuriko Kajiya (departing this season) was charming and sweet. Veronika Part was grave, stern, and terrifying as Myrtha. Her leaps sliced through the air. Moreover, even though she doesn't have the Giselle body, you realize that she could be a wonderful Giselle -- her eyes are soulful and sad, and she has beautiful elevation. Her intendants Melanie Hamrick and Stephanie Williams were also excellent. The Wili corps were okay, if a little sluggish in their traveling arabesques. 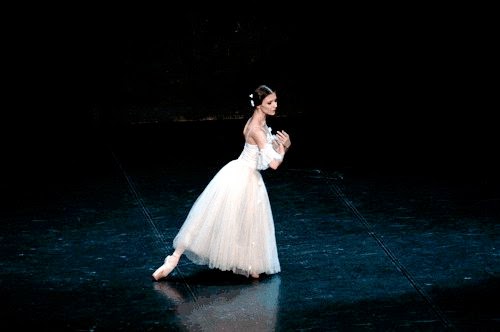 The second Giselle performance I saw, on 6/21, reminded me that when done right, this is still one of the greatest ballets ever made. The Giselle was Alina Cojocaru, and Albrecht was David Hallberg (subbing for an ill Herman Cornejo). Cojocaru is tiny and waiflike, with a sweet face and humble demeanor that makes her completely believable as the naive peasant girl. She skips out of the house with some flowers tied to her hair, and you love her. You love her even more when she peeks into the hut out of curiosity, and then you love her even more when she hugs her mother with real affection.

The contrast between Cojocaru's simple, unaffected innocence and Hallberg's somewhat remote, aristocratic persona immediately sets up the tension in the ballet. This isn't one of those performances where you think that Albrecht and Giselle could make it work. The gap in class and upbringing is too large to overcome. Hallberg sneering at Cojocaru's "he loves me, he loves me not" game is bad news, and we know it. Cojocaru's interactions with Bathilde were also touching -- she bows happily to Bathilde, obviously bowled over by the noblewoman's glamor and riches. Cojocaru's mad scene was heartbreaking in its simplicity -- she didn't need any histrionics. She simply traced her earlier, happy dances and then sat in the middle of the stage and cried.

Cojocaru has had a number of injuries on her foot and she lacks the technical whizbang security of Semionova. Cojocaru's Spessivtseva variation had her shortening her hops on pointe -- she only made it halfway across the stage. And her backward entrechats in Act Two didn't have the crispness of Semionova. But Cojocaru understands this ballet, she's knows that the steps for Giselle are simply an outline. It's up to the ballerina to fill in the steps with personality. Cojocaru shows off what she can do -- she has wonderful ballon, and her jumps have this beautiful airiness. Her extension is beautiful. She doesn't raise her leg in arabesque -- it floats up. Above all, the sweetness and simplicity of the girl in Act One is carried over to Act Two. She's not exactly a ghost, nor even a Wili. She's just the same loving girl from Act One. She's ethereal in the way her leg floats upwards in her exposed developpe, or when she flies across the stage in a grand jete, but there's no sense that this is a haunted spirit. It's a kind of unorthodox way to portray Giselle, but Cojocaru makes it work.

Hallberg was much improved from his performance on Tuesday. I'm still disappointed that he chose the diagonal brises over the entrechats, but this was a performance at a higher level of inspiration. For one, he was much more comfortable partnering Cojocaru. The overhead lifts in Act Two looked effortless -- like he was lifting paper. And again, the contrast between his icy prince and her sweet peasant girl was clearly delineated and moved the drama forward.

Stella Abrera seems permanently miscast as Myrtha. Willowy and graceful, she always looks like a Giselle. Why she's never been given the opportunity to dance Giselle is one of ABT's most enduring mysteries. She executed all the steps of Myrtha with her usual aplomb, but the cold imperiousness wasn't really there. Her intendants Christine Shevchenko and Zhong-Jing Fang were fine, Shevchenko being the stronger of the two intendants. The peasant pas de deux was performed again by Craig Salstein and Yuriko Kajiya, who both seem like they've danced this too much to really care about it anymore.

When the clock struck four, Cojocaru dropped Hallberg a single daisy petal before she returned to her grave forever. The gesture was touching -- in Act One, he had carelessly tossed aside her flower. Now, he was holding onto a single petal. Cojocaru is one of this generation's greatest Giselles, and New York is lucky to have seen such a special portrayal.

p.s. There was a very sweet moment in the curtain calls when Alina turned her back to the audience and bowed to the corps de ballet. I don't think I've ever seen a prima ballerina do that.
ABT Alina Cojocaru ballet David Hallberg Giselle performance review Petipa Stella Abrera Veronika Part