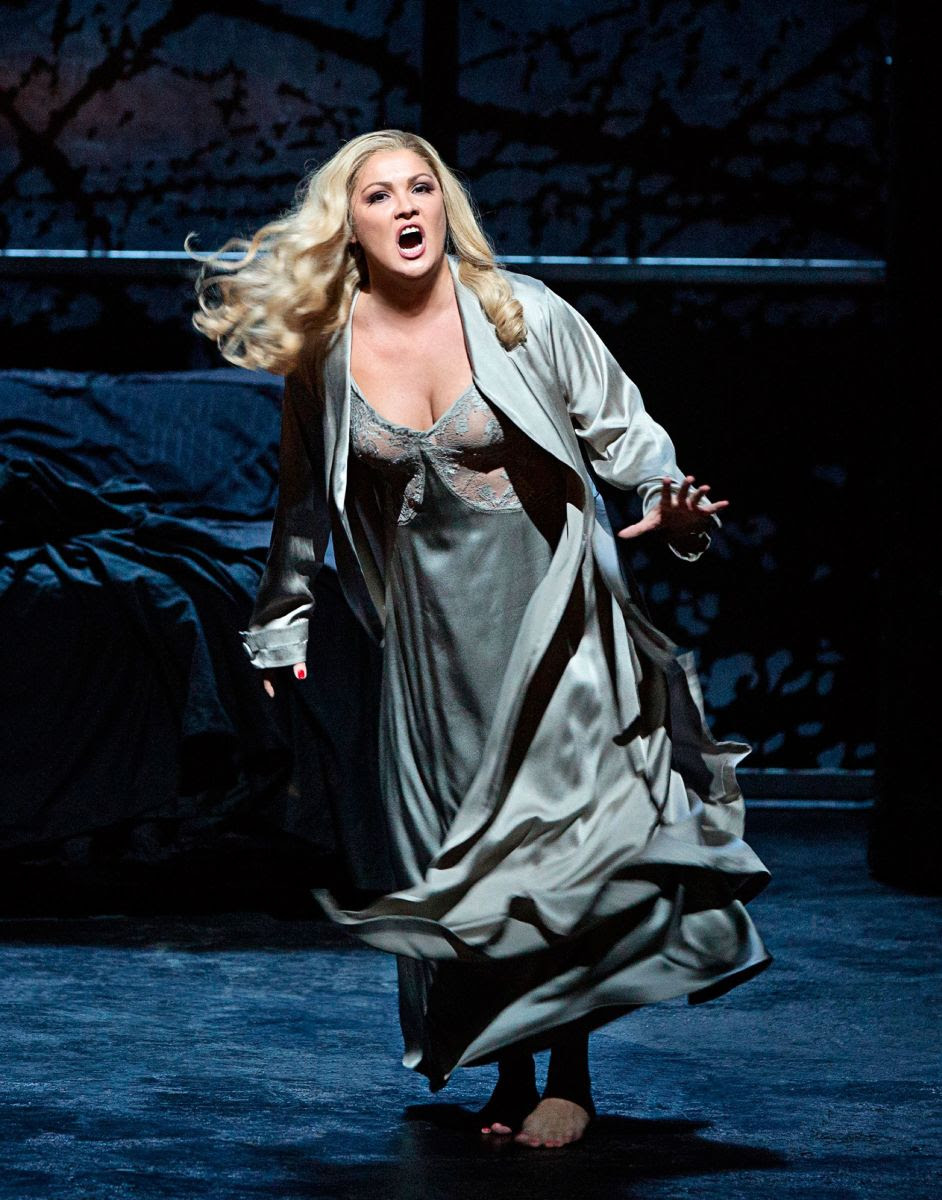 There is a certain type of woman you sometimes meet who you know is an absolutely ball-busting coldhearted bitch, but for reasons known only to her insists on acting girlish, coy, and "sweet" in public. I feel like Anna Netrebko has been doing that schtick for the past few years. She's insisted on keeping ingenue roles like Norina, Adina, and Mimi in her repertoire even though neither her stage persona nor her voice really suited them anymore.

Well tonight the persona was dropped, the coy girly act disappeared, and ANNA NETREBKO appeared onstage and it was glorious. Lady Macbeth suits her voice like a glove -- she has the volume, the range, the dark timbre, and the ruthlessness that was spellbinding. After a few shaky off-pitch moments in "Vieni t'affreta" (and smudged trills -- one of the things about Anna Netrebko is she can do a beautiful slow prepared trill but not a fast short trill) she proceeded to give the realest, most convincing, best-sung performance I've ever heard her give. It was bold, kick-ass, seat-of-your-pants singing. "La luce langue" had her dipping into her now formidable lower register and the chilling edge that her voice has acquired. She wasn't perfect: the Brindisi had some of the famous Netrebko rhythmic slackness, and the duet with Macbeth at the end of Act III had a surprisingly weak high C (probably due to the fact that the direction called for her to spread eagle and get Biblical with Macbeth). But the Sleepwalking Scene was by any standards an amazing piece of vocalism. The voice flowed like lava, and the fact that she capped it with a pitch-perfect D-flat was just icing on the cake.

Anna's interpretation of Lady Macbeth was not very sexy, despite the revealing clothes and blond Veronica Lake wig. (Which for the record I didn't like. For me the definitive Lady Macbeth look was the austere straight black hair Akira Kurosawa chose in Throne of Blood.) She was given new costumes (including a Hillary Clinton power pantsuit), and she wore them like a champ. She was tough and masculine and it was clear she had her husband's balls in an iron vise-grip. Her body language resembled Mike Tyson, or a Fortune 500 CEO. I loved it. In the Sleepwalking Scene she wasn't really crazy, more like a caged sociopath on Death Row. All evening there was no coyness, no twirling. This is the Anna Netrebko who gave Debbie Voigt the staredown of death in an HD interview after Debbie made the mistake of asking about what Anna "learned" from Valery Gergiev. I love this "new" Anna.

The performance of Macbeth was overall pretty strong. Zeljiko Lucic (Macbeth) kind of breaks my heart. He's a musical singer, he has a basically pleasing timbre, and that puts him above most of the "Verdi baritones" on the scene nowadays. But, but, but. He's a reserved singer, one whose body language often indicates a weird discomfort onstage. In fact, I noticed that even during his big aria "Fuggi regal fantasima" he avoided downstage center like the plague. Also, his voice seems to get stuck in his throat a lot, and the sound is cloudy and wooly. And he flies off pitch when he applies pressure. The person sitting next to me said, "A for effort C for execution." So the title character got lost in the background.

The luxury casting didn't help Lucic. He was surrounded by so many oversize voices. René Pape (Banquo) made the most out of his short but memorable role. All the cigarettes, alcohol and hard partying can't seem to touch his glorious voice. Joseph Calleja (Macduff) was perfect casting: great voice, stolid actor. "Ah la paterno mano" had all the Calleja touches: that fast vibrato, the honeyed timbre, and the sense that he doesn't know what the hell he's singing about, but who the fuck cares when he sounds like that? Even Malcolm sounded great. Noah Baetge is a big guy with a big, ringing voice and was definitely a pleasant surprise.

I have this unreasonable crush on Fabio Luisi. I think he's adorable, with those cute nerdy glasses and curly gray hair. With that being said, he can be an uneven conductor. There were some weird coordination problems with the chorus all night long (the act one concertato took some time to settle), and also an unwillingness to revel in Verdi's oom-pa-pa melodies. It's like he wanted it to sound slower and graver when part of the appeal of early Verdi is the mindlessly rousing tunes.

The 2007 production by Adrian Noble steals heavily from staged Shakespeare trends. The World War II setting. Seriously, why is it de rigeur that staged Shakespeare tragedies about rulers be reset to World War II? There were dictators before and after, just sayin' ...  Extremely dark lighting, atmospheric uses of blood stains, blah blah blah. It looks nice and gets the job done.

This performance felt like the real start of the Met season. The screaming, stomping ovation the cast received at the end of the performance reminded us why opera is important, and it was wonderful to hear after a summer of intense labor negotiations. It was sound and fury, signifying that everything was all right at the Metropolitan again.
Anna Netrebko Joseph Calleja Metropolitan Opera opera performance review Rene Pape