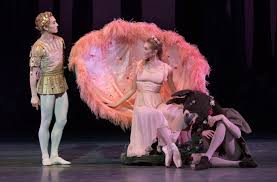 A Midsummer's Night Dream has become the traditional way to close the NYCB's spring season. Because the ballet requires so many moving parts (a huge cast of soloists, the entire corps de ballet, plus a large contingent of SAB students) sometimes casting for this ballet can be a bit stale. If it ain't broke, why fix it?


So ... how was she? The short answer is that she was promising, the long answer is that she was very promising. I say "promising" because she certainly has all the physique du jour for the role -- the long limbs, the blond beauty queen looks, and a natural dignity that make her seem mature beyond her years. Her Titania is not a fully formed portrayal as yet -- but how could one expect it to be? She hasn't figured out how to stretch and unfurl her long limbs for maximum effect, and sometimes it seemed as if she was simply concentrating on the steps and not really listening to the music. She also had some unsteadiness in the pas de deux with her cavalier (Ask La Cour, replacing Russell Janzen). But there were also things she did that suggest that with experience, she could become a very special Titania. In her pas de deux with Bottom (an excellent Cameron Dieck) she was already playing off the audience and Bottom for laughs. She was fawning over Bottom with real tenderness, and it was delightful. She understands that Titania's have to be beautiful, but they also have to be funny.

Miller was not alone in making an anticipated debut -- Anthony Huxley was also making his debut as Oberon. Huxley's Oberon was perhaps the cleanest Oberon I've seen in recent memory -- his line is impeccable, he points his toes, his scherzo was not just a crowd-wowing combination of jumps and beats, but a model of restrained classicism. It was just maybe a little too clean. There was no increasing momentum in his various entrances and exits during the Scherzo -- a more experienced Oberon knows how to build excitement. There should also be an element of ridiculousness to Oberon that Huxley didn't quite capture. But you can't argue with the quality of his dancing. Not a surprise to find out that he was promoted to principal today.

Other highlights of the performance: Sterling Hyltin's wonderful Hermia (she's one of those who can really make something special of this role) and Faye Arthurs' sensitive Helena. The two of them were wonderful whether they were dancing their angsty solos or in a hair-pulling fight. Antonio Carmena was a spirited Puck, and Ashley Bouder and Adrian Danchig-Waring brought a wonderful serenity to the the Act Two Divertissement. Bouder isn't a natural in this role, but she's so secure, so solid, even with all the tricky hand positions in the diagonal and the promenades. Danchig-Waring's partnering of her was impeccable.

The performance this Sunday afternoon was overall stronger than last evening's performance. In that performance, the only real highlight was Daniel Ulbricht's incredible Oberon (also a debut). Ulbricht's Oberon was the opposite of Huxley -- Ulbricht doesn't have Huxley's long, clean lines, and his form can be sloppy. But Ulbricht was powerful, explosive, even, much like the original Oberon Edward Villella. He seemed to burst into the air in his jumps, and he had that ability to stay in the air. Every time Ulbricht flew offstage during his scherzo the audience went nuts. His characterization was also much more extroverted. Who's better, Huxley or Ulbricht? Who cares? NYCB now has two great new Oberons. Troy Schumacher was also excellent as Puck.

Otherwise, Teresa Reichlen was at her most cool, remote, and inscrutable as Titania. She gets the beautiful part, but she doesn't quite get the funny part. She needs to take cues from Maria Kowroski (going on maternity leave) on how to better articulate the funnier moments. She was such an ice princess that her Bottom (Harrison Coll) had no choice but to ham it up shamelessly in their pas de deux. But the comic effect of the dance was lost -- Titania is supposed to be fawning over a puzzled Bottom. In this case, Reichlen was barely aware of Bottom, who was lovestruck -- with the audience.

The Athenian lovers were okay, but a little blank -- Brittany Pollack (Helena) nor Ashley Laracey (Hermia) both sort of generic. The men (Russell Janzen as Lysander and Zachary Catazaro) were better. A sour note was struck by Georgina Pazcoguin's Hippolyta. She was also Hippolyta in this Sunday's matinee. Pazcoguin doesn't have the towering build nor long legs traditionally associated with this role, and in both performances her fouettés travelled wildly. Her form was also sloppy.

In the Act Two divertissement Sterling Hyltin and Amar Ramasar were also making their debuts. Ramasar partnered admirably, but Hyltin was slightly miscast in this role. Her natural instincts are for charm, femininity, sweetness. This role is really more about abstract classicism. Hyltin also doesn't have the rock solid technique for this sort of thing -- her hands shook in the promenades.

But last night's MSND had one extra bonus besides Daniel Ulbricht's amazing Oberon. Sitting a few seats ahead of me was the incredible, amazing Elisabeth Moss aka Peggy of Mad Men. She was incredibly gracious as about a zillion people went up to her to gush about Mad Men. I was completely tongue-tied as I told her how great she looked in a not-plaid dress. It's great to meet celebrities whose work you admire and to get a chance to express appreciation of their talents to their face. I even got a selfie with her.
Adrian Danchig-Waring Anthony Huxley Ashley Bouder Ashley Laracey Balanchine ballet Daniel Ulbricht Midsummer's Night Dream NYCB performance review Sterling Hyltin television Teresa Reichlen