If last week was a whirlwind of Nutcracker adventures, this week I went to three tried and true warhorses: Alvin Ailey Dance Company on 12/15, Rigoletto on December 17, and one more look for the year at the NYCB Nutcracker on Sunday afternoon.

Usually mid-week revivals of the Met's "Las Vegas" Rigoletto can be dull affairs, but last night's performance had some fresh faces and voices (to New York at least). Jean François Borras first made his Met debut in a last minute substitute Werther almost two years ago. I was immediately bowled over by the beauty of his singing. Since then he's made a return to the Met last season for some Rodolfos and sung Werther and Des Grieux in Vienna.

Last night the things that impressed me so much the first time I heard him were there again -- he made the Duke of Mantua an exercise in stylish vocalism. His voice is not large but it almost casually floats through the air in a way that seems appropriate for the Duke's fickle nature. He doesn't go for squillo at the expense of musicality -- there were no extended dropouts to sing a high note (although "La donna è mobile" ended on a sustained, crowd-pleasing high B). Everything is sung in a very bel canto, with elegance. His finest moment was in "Bella figlia dell'amore" -- so seductive that you almost believed him, and what's more, almost understood Gilda's sacrifice. Let's hope New York gets to hear him many more years to come.

The Gilda was 27-year old Nadine Sierra, who has a bright, well-produced timbre, impressive coloratura technique, and most of all, a winning charm and naiveté that made her character and actions believable and understandable. Her opening duets with "Gualtier Malde" and her father bubbled over with curiosity and infatuation. "Caro nome" was sung as a daydreamy reverie (with the gentle rustling trills observed), and her final duet with her father had the feel of a young girl who still didn't understand why she was dying in the trunk of a Cadillac. Her highest notes have a slightly hard edge to them but this was a wonderful performance.

Dmitri Ivaschenko was a delightfully greasy Sparafucile with a rich bass. Robert Pomakov made the most out of the brief role of Monterone. Zeljko Lucic reprised his by-now very familiar Rigoletto. Maybe too familiar. Lucic's performance was the only one to feel formulaic, as if he were drawing the outlines of a Rigoletto rather than living the character. Roberto Abbado led the Met orchestra in a rather listless performance from the pit. Michael Mayer's production goes for flashy effects (strippers! Monterone as a shiek! Gilda carried out in a mummy coffin!) over drama, but with these sensitive performers you believed in the opera. 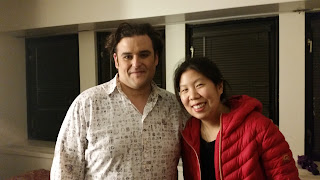 If the Rigoletto performance had an unexpected freshness and vitality, the Alvin Ailey Dance Company at the City Center had a slightly stale feeling. Company director Robert Battle has been adding more interesting repertoire to the company but the core of the company remains Revelations and ... everything else. Alvin Ailey was in many ways a one-hit wonder. Ailey's Night Creatures was charmingly danced by the always wonderful troupe, but the thinness of the choreography made the whole thing feel like empty calories. This piece looks exactly how you'd expect it to look -- a bunch of dancers shaking it to Duke Ellington. Even worse was Judith Jamison's insipid duet A Case of You, set to a syrupy Diana Krall cover of Joni Mitchell's famous love song. This was basically one of those "man meets woman, they embrace, they part, they embrace again, they part again, wash rinse repeat" dances. Jacqueline Green and Jamar Roberts did the best they could but couldn't save this fluff. No Longer Silent was Robert Battle's dance set to music by Erwin Schulhoff, a composer who died in the Holocaust. So, surprise! The ballet was set in a stark concentration camp and ended with the dancers clawing furiously at the showers. Bleh. It was meant to be a Very Serious Piece but the road to ballet hell is paved with Very Serious Pieces.

Thankfully, there's always Revelations to save the day. The 1960 classic (along with the obligatory encore) closes almost every program and I don't know how the Ailey dancers manage to make it look fresh every night, but they do. It's a warhorse for good reason -- it just works.

I rounded out my frantic December schedule with one final matinee performance of the NYCB Nutcracker today. Overall the performance didn't match the perfection of the earlier Hyltin/Veyette/Peck Nutcracker but Mr. B's Nut is always worth seeing. Ashly Isaacs (Sugarplum Fairy) is a work in progress. She's very athletic, cheerful, and her ménage of pique turns was blindingly fast but had a slip during a supported pirouette in the final moments of the coda, and her timing was awkward in some moments in the grand pas de deux -- that piqué turn to arabesque penchée series in particular was too carefully prepared to make its full impact. Taylor Stanley was an elegant partner. A bit low-key but beautiful line. More intriguing was Ashley Hod (Dewdrop). She's a tall leggy looker and managed the dizzying allegro work of the Dewdrop with style. Other standouts: Harrison Ball exploded out of the box in Tea (often a variation that makes little impact) and Daniel Ulbricht's Candy Cane.

The woman sitting next to me was from London and it was her first time seeing this version. She was almost as fun as the performance itself. She clapped when the tree grew. She cried at the snowflakes. She ooh'ed and aah'ed at the angels. She cheered loudly after each successive Candy Cane hoop jump. When Mother Ginger left the stage waving to the audience she waved back. At the end of it all she sighed, "This was SO beautiful. Most beautiful thing I've ever seen." Amen.
at December 20, 2015