The Most Incredible (???) Thing 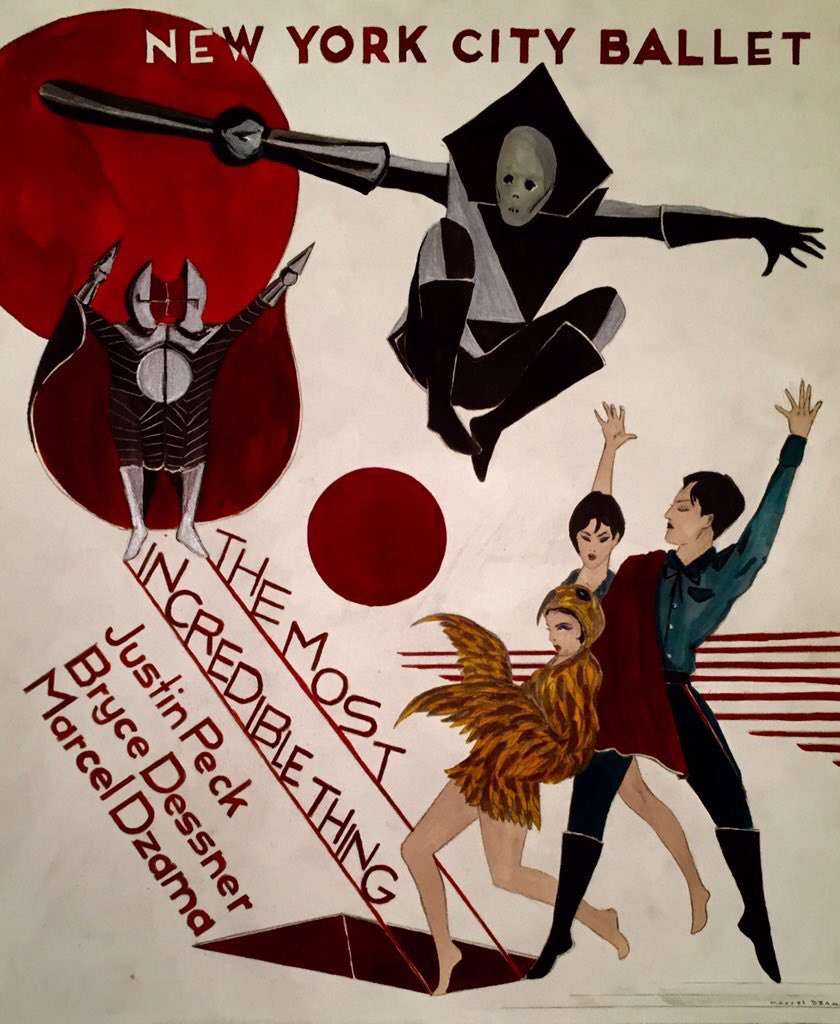 Justin Peck's The Most Incredible Thing was by far the most hyped premiere for the New York City Ballet in recent memory. Peck is only 28, but he's already had a documentary made about him and critical consensus about his ballets has generally been very positive. The buildup to The Most Incredible Thing merited a huge NYTimes profile and endless mailings by the NYCB. NYCB obviously spent money on this project -- when I attended tonight's performance (the second -- premiere was on February 2) I was handed a beautifully illustrated book of Hans Cristian Andersen's fairy tale along with design and costume sketches from artist Marcel Dzarma. Inside the booklet was a large poster. In the age of Amazon kindles and digital photography this kind of old-school lavishness is almost unheard of.


I wish I could say the ballet lived up to the hype. It certainly had some "incredible things" -- for one, Dzarma's costumes were incredible. They were creative and visually pleasing without being undanceable. Bryce Dessner's score wasn't incredible, but it was always listenable and mostly pleasing to the ears. Reminds me of Phillip Glass mixed with 1940's Soviet dram-ballet type music. And Peck utilized a cast of 56 dancers (including some SAB students) and as expected, the talent at NYCB is so deep that he was bound to get some incredible performances. Tiler Peck was fantastic as the cuckoo clock. The choreography was full of flying leaps and off-balance pirouettes and Peck's energy set the stage on fire. She looked like she was auditioning for Firebird (and please let that happen!).


The story itself was a good story. And the 12 divertissements (representing the twelve hours of the Creator's Most Incredible Clock) should have been amazing. But the ballet was dragged down by a very rote, by the numbers (pun intended) narrative structure. The chief weakness was that Peck never bothered to characterize either the Creator or the Princess. Tonight they were danced by Tyler Angle and Sara Mearns but it could have been anyone in those roles. We have no sense of who they are, and why we should care about the Creator's artistic vision. And without this emotional investment in the protagonists, the ballet had no emotional resonance.


The story of the Creator's wooing of the Princess is barely developed before we move to the 12 hours of the clock, which in reality meant 12 divertissements. The bulk of the ballet is devoted to those 12 divertissements, and while some of them were very nicely choreographed (The Four Seasons), others were really head-scratching. For instance the Seven Deadly Sins/Seven Days of the Week were 7 women dressed alike in unitards who rolled around the floor for a few minutes. There was no attempt to convey that they are seven different sins. Peck also didn't bother to differentiate the Five Senses. Let's read the Hans Christian Andersen original: "Sight was represented by a man who made spectacles. Hearing was a noisy coppersmith. Smell was a girl with a violets for sale. Taste came dressed as a cook. Feeling was a mourner, with cape down to his heels." How much better does that sound as dance than what we got, which was five female corps girls in a uniform divertissement?

Another thing about Peck utilizes his large cast exactly the way one expects them to be utilized, which is the problem. Was it a surprise that Daniel Ulbricht (The Gambler) exploded onstage with big jumps and turns? Or that Adrian Danchig-Waring and Rebecca Krohn (Adam and Eve) had a sinewy duet that showed off the fact that they're well, sexy? Great choreographers will often push the boundaries of what their dancers can do. Peck didn't really think outside the box when he fielded the talents of his company.

Things only pick up when The Destroyer (Andrew Veyette) arrives on the scene. Veyette is cast against type as the villain and (as is often the case) the villain was the only interesting character in the ballet. The choreography for the Destroyer is sharp and menacing. I loved the use of the sword as a phallic symbol and Mearns is a good enough dance actress that she could convey a sense of lust at this dangerous bad boy. The resolution of the ballet is a bit trite but does include some of Dessner's best music.

Reviews of Peck's ballet have ranged from dismissive to harsh. I don't think these reviews are entirely fair -- this is not a bad ballet. It just didn't live up to the hype. And the audience suffered through some bad ballets in this very long evening. Christopher Wheeldon's Estancia is a bad ballet. It's a shameless ripoff of Agnes de Mille's Rodeo but without any of Rodeo's charm. Not even Adrian Danchig-Waring's sexy City Boy and Ana Sophia Scheller's charming Country Girl could save a ballet where we're treated to the sight of horses galloping onstage for much of the 30 minutes. And I love Amar Ramasar but I don't ever need to see him hump Ana Sophia Scheller from behind in some Horse-on-Girl action ever again.

The three "starter" ballets weren't bad, they were just generic. The best of the lot was probably Robert Binet's The Blue of Distance, as that had a beautiful score by Ravel, and a nicely romantic ambience. Troy Schumacher's Common Ground was hampered by hideously tatty, tacky costumes by Marta Marques and Paulo Almeida. Think of the worn leg-warmers and loose t-shirts dancers are wont to wear when warming up, add some weird strings hanging off the sides of things, and combine them in the most garish colors, and that's what the costumes looked like. How was the choreography? Beats me, as I could barely discern what the ballet was like underneath all that flapping fabric. Polaris by Miles Thatcher is one of those ballets that's pleasant enough to watch, but instantly forgettable as soon as the curtain drops.

In the meantime, classic Balanchine rep is in as good shape as ever. I caught two all-Balanchine performances this week and some highlights: Megan Fairchild breezing through Ballo della Regina (she completed those circular hops on pointe like nothing), Megan Fairchild and Gonzalo Garcia's lovely, romantic Sonatine (less showy but more touching than the Peck/deLuz combo), Sara Mearns in Mozartiana (she was radiant and authoritative in Preghiera, and thrilling in the Theme and Variations -- her pirouettes just seemed to devour space), Joseph Gordon's high-flying whiz bang third movement of Symphony in C and Tiler Peck and Andrew Veyette's security and serenity even while dancing the most difficult choreography in Theme and Variations.

With this level of talent, Justin Peck is bound to make a story ballet that will really utilize all the dancers to the maximum potential and tell a great story. And that will really be The Most Incredible Thing.