The Little Foxes: Basket of Deplorables 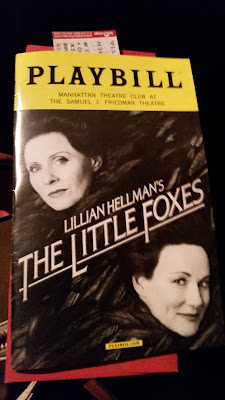 Sometimes when I watch the characters parade through Trumpland I get a surreal feeling. I almost can't believe that people like Paul Ryan, Steve Bannon, Sean Spicer, Jared Kushner, Ivanka Trump and the rest of the vat of deplorables exist.

Tonight on Broadway there was a pithy reminder that people so greedy, so heartless, so devoid of any inner life or compassion and empathy really do exist, and what's more, people have been writing plays about these kinds of people for a long time. The Manhattan Theatre Club's revival of Lillian Helmann's classic The Little Foxes has a bit of stunt casting -- Cynthia Nixon and Laura Linney are alternating roles of Regina and Birdie with each performance. When I first heard about this casting I immediately decided that Cynthia Nixon was a more natural Regina and Laura Linney more of a Birdie. So this was the cast I saw tonight. The show is still in the first week of previews.


Prior to this evening my only frame of reference is the famous 1941 movie adaptation so I'll be referencing that movie a lot. Bear with me.

I think I made the right choice. I honestly can't imagine the role reversal. Laura Linney was pitch perfect and heartbreaking as the long-suffering, alcoholic, abused Birdie. She nailed the fluttery, genteel manners of a Southern belle and was so likable and vulnerable from her first entrance that the theater gasped when her husband Oscar (Darren Goldstein) casually hit her. I loved the way she indicated to the audience her alcoholism by the nervous way she snuck gulps of alcohol while the others drank in a leisurely, social way. Her monologue about the hiccups drew extended applause. I didn't think it was possible to equal Patricia Collinge's performance in William Wyler's film but Laura Linney has done that.

Cynthia Nixon's Regina still needs a little refining (her Southern accent comes and goes) but already you can see a strong clear vision of Regina. Nixon's Regina doesn't really attempt to play up the Southern charm and sex appeal. Her body language is aggressive and cold, and one thinks that had Regina lived in another time she would have made a great CEO. When she declares she's "going to Chicago" (presumably to become Marshall's mistress) there's no sexuality in her voice. It's purely business for her. Nixon doesn't have quite the iciness of Bette Davis's famous portrayal but she comes close. In the famous "I hope you die" scene Cynthia Nixon's voice is more desperate, more high-pitched. Regina is scared of losing her get-rich-quick scheme, but the fear is very real and palpable and thus human. But Regina's heartlessness is chilling. When Horace was struggling up the stairs Nixon sat back in a chaise lounge and smirked. Mission accomplished.

Richard Thomas's Horace had an aw-shucks decency but also a wiliness that's absent from Herbert Marshall's portrayal. His interactions with Regina had more venom -- you could imagine that once upon a time there was passion in this mutually toxic relationship. Horace might have been weak in the heart but his stubbornness was as implacable as Regina's greed. And the Hubbard deplorables (Michael Benz as Leo, Michael McKean as Ben, Darren Goldstein as Oscar) were fantastic and nicely differentiated. Leo was a spoiled playboy, more frivolous than anything. Oscar was a brute and wife-beater. Ben was the smooth businessman. The Tim Cook to Ben's Steve Jobs. Or (ugh) the Mike Pence to Ben's Donald J. Trump.

Only Francesca Carpanini was a bit immature and annoying as Alexandra. Not that she was bad, but her portrayal didn't have the depth of the other actors onstage. As a result her final confrontation with Regina didn't have all the impact it could have had. Cynthia Nixon played the final scene perfectly though. There was a trace of tenderness as she asked Alexandra to stay one last time, but her body language was still cold and distant. Regina had given up all pretenses of wearing a human suit a long time ago.  Caroline Stefanie Clay as Addie and Charles Turner as Cal provided comic relief as well as a moral center to the surroundings as they tried the best they could to protect Birdie and Horace.

Daniel Sullivan's direction is straightforward and direct. There's one unit set, a rather plain-looking parlor in Regina's home. It's a very non-interventionist production -- Sullivan seems content in letting the actors play out the drama. The evening is 2.5 hours long with two intermissions but there wasn't a slow moment. This is a wonderful revival and I highly recommend that everyone who loves this play see it.