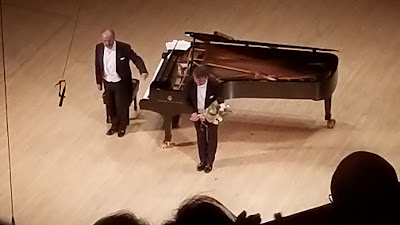 To be a Jonas Kaufmann fan in the past few years has meant constant heartbreak. In 2014 he sang a sensational series of Werthers at the Met. During the last performance fans ripped up programs to shower him with confetti. The world was his oyster. Little did we know that he would not return to the U.S. to sing for nearly four years. He canceled Carmen, he canceled Manon Lescaut, he canceled Tosca. Therefore speculation was high about whether he'd actually show up for a Carnegie Hall recital. Fans feared for days that we'd get an announcement of illness. But January 20 rolled around, and he posted a photo of himself in front of Carnegie Hall. By 8:00 the old place was packed like sardines.

So 8:15 rolled around, and out strode Jonas and pianist Helmut Deutsch. There was a rapturous ovation and he gave a brief speech thanking the crowd and then the recital was on. Schubert's Die Schöne Müllerin is a song cycle often associated with slightly younger-sounding tenors than Jonas. It is, after all, about the heartbreak of a young man. Fritz Wunderlich made a famous recording that shows what can be done with this cycle when the singer sounds like a young miller. And in the first song ("Das Wandern") Kaufmann's thick, hooded voice sounded neither young nor particularly tenor-ish. In the four years since Werther he's sung Otello and Andrea Chenier, and his always baritonal timbre has grown even darker. It wasn't an encouraging sign.

But these fears were alleviated within a few songs -- he lightened his voice, he started to use a lot of his trademark pianissimo, and by "Die Neugierge" (IMO the most beautiful song in the entire cycle) Kaufmann was in his element -- tender and dreamy. As the song cycled through the miller's first blush of love, joy, jealousy, and finally heartbreak, one realized that Kaufmann still knows what to do with this music even if the voice now sounds too mature to be convincing as a young miller by the brook. Schubert's music also did major legwork for Kaufmann. The tender songs about love and loss naturally draw in the listener. Only Schubert could make the mention of a green ribbon break your heart.

In general Kaufmann was better with the more lyrical sections of the cycle. "Morgengruß"was absolutely lovely. He did not do as well in the more frantic, defiant, or angry songs like "Mein" and "Der Jäger." He had a particularly tiresome habit of punching out the final stanza as if he were singing "Esultate" from Otello. This stentorian delivery sounded at odds with harebell delicacy of Schubert's music. He ended the song cycle with the most beautiful, least affected singing of the night. "Trockne Blumen," "Der Müller und der Bach," and the lullaby "Des Baches Wiegenlied" were all sung with the simplicity and directness that recalled the tenor that the world fell in love with.

At the end of the cycle the ovation was the kind of raucous, ecstatic type that one doesn't associate with lieder song cycles. He came out again and again for bows with Deutsch and sang four encores including Schubert's "Die Forelle." I was hoping for Lehar's "Girls Were Made to Love and Kiss" but oh well.  He ended the recital by blowing kisses at the audience. New York loves him.

Kaufmann is one of those singers who is Worth It. And by Worth It I mean that you can complain about his dark, throaty timbre and his odd vocal technique which makes him sound like a lyric tenor half the time and a heldentenor-lite the other half of the time. You can find the way he phrases and shapes music mannered. But at the end of the day this is a major artist, whose total effect is greater than the sum of all his parts. In other words, he can (almost) get away with canceling and disappointing fans over and over again. Because when he does show up it is always special. Come back soon Jonas. You have been missed.