To Kill a Mockingbird; ABT's Spring Season Chugs On

- June 07, 2019
I'm always skeptical when one of my favorite novels gets adapted into a play. To me novels are internal and plays are external, and when novels are adapted into plays they lose their inner voice. And so it was when I heard that Aaron Sorkin was adapting Harper Lee's To Kill a Mockingbird into a play. I loved the 1962 film adaptation, but that film had the close cooperation of Harper Lee. Harper Lee's estate actually sued Aaron Sorkin before a private settlement was reached, allegedly because Lee's estate felt that Sorkin had taken too many liberties with the novel. It was only the raves of friends and the week-after-week sell-out crowds that made me buy a ticket.


Well to anyone who still was on the fence about seeing To Kill a Mockingbird, lay those doubts to rest and try to snatch up a ticket.  Aaron Sorkin has streamlined the novel. Tom Robinson's trial weaves in and out of the play as other scenes play out. Sorkin's adaptation does take some liberties with the novel but the essence of Lee's story is there, and the issues are so timely that the audience often could only laugh uncomfortably. Maycomb, Alabama in 1934 is not so different from Anywhere, United States in 2019. The election of Donald Trump proved that racism, bigotry and hatred are still strong mobilizers of people. Tom Robinson's story is still being told -- there's actually a new Netflix series about the Central Park Five, who were wrongly accused of raping a white woman before the real rapist was caught thanks to DNA.

It is true that Atticus is a more complex figure in the play, but that's not because his character is changed. He's still the "most decent person in Maycomb" who insists on being polite to everyone even if those people are bigoted, hateful, ignorant, and violent. It's that in 2019 these entreaties come across as naive at best and patronizing at worst. After a bigoted old woman says vile things to Jem and Scout, Jem retalitates by ruining her camelias. Atticus makes Jem go back to apologize to Mrs. Dubose (a wonderful Phyllis Somerville). But is this even the "right" thing to do?

Sorkin's play benefits from strong direction from Bartlett Sher. Sher's attempts to make classic musicals "woke" have mixed results. But in this case, his social justice warrior tendencies are entirely appropriate and he elicits strong performances from a very talented ensemble of actors. Jeff Daniels is very different from Gregory Peck in the movie. Daniels is more mercurial, less self-assured. It's an equally valid portrayal.

Everyone is talking about Jeff Daniels' dignified portrayal of Atticus Finch, but to me the strongest performance came from Celia Keenan-Bolger as Scout. Having adults play children is always tricky but Bolger seamlessly transitioned between the adult memory play voice and the child's voice, and what's more, so convincingly conveyed the body language of a child that when she curled up in Calpurnia or Atticus's lap it didn't even require a suspension of disbelief. Keenan-Bolger's performance was so strong that the other children (Will Pullen as Jem, Gideon Glick as Dill) suffered by comparison. Glick in particular seemed to be doing a bizarre Truman Capote impersonation that bordered on the offensive ("Dill" was based on Truman Capote).

After Keenan-Bolger, the most affecting performance came from Erin Wilhelmi as the pathetic Mayella Ewell. You could only feel sadness for her despite her hateful accusations -- her body was always contorted into a fetal position. Obviously the product of years of trauma and abuse. Dakin Matthews was very funny and trenchent as the folksy but decent judge. Neal Huff as Link Deas had the whole auditorium crying with his brief scene with Scout, Jem and Dill. I could rattle off more names but really, most everyone is great. The Calpurnia (LaTanya Richardson Jackson) was out but her understudy Shona Tucker was wonderful.

I had a few quibbles with the play. One is that (as in the novel and film) the circumstances surrounding Tom Robinson's death are not questioned by anyone, not even Calpurnia who in Sorkin's adaptation has much more agency and advocates for her own community in Jim Crow era Alabama. The other is that Bob Ewell's character has been beefed up and not to the good. In Sorkin's version he's not just a abusive drunk with a probably incestuous relationship with his daughter, but a rather shrill white supremacist who spits out sentences like "In Africa, they don't build houses," and threatens Atticus with "one tree, two ropes." It's too heavy-handed. Frederick Weller also doesn't have the menace to really make Bob Ewell frightening. My last quibble is that the story of Boo Radley is somewhat marginalized so the emotional payout from his appearance at the end of the play doesn't have nearly the same emotional impact.

But really, these are just quibbles. Overall Sorkin and Sher have created a thought-provoking, moving night of theater that is so timely that as I left the theater I overheard many audience members having deep, serious conversations about the issues presented in the play. To Kill a Mockingbird is that rare Broadway sensation that lives up to the hype. 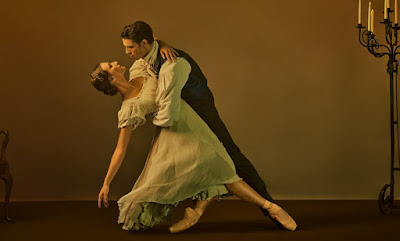 In other news, I reviewed two ABT perfromances for bachtrack. One was a trio of Twyla Tharp works. It was mostly wonderful. In the Upper Room remains an astonishingly innovative work. Full review can be found here. The other was Cathy Marston's Jane Eyre, which was absolutely dreadful. If Sorkin's To Kill a Mockingbird serves as an example of how to adapt a beloved novel into a different medium, Marston's Jane Eyre is Exhibit A of what not to do.  Full review here:

It is Marston's severely limited ballet vocabulary that kills this ballet. Marston's choreography is heavily influenced by Kenneth MacMillan in that all depictions of male-female relationships are limited to acrobatic lifts, women being dragged around on the floor, contorted torsos and flailing limbs.