- December 19, 2019
NYC has another Nutcracker! Dorrance Dance just premiered their tap-dance Nutcracker at the Joyce Theater on Tuesday. I reviewed it for bachtrack here. It's overall a rollicking good time, although I am not that crazy about Duke Ellington's arrangement of Tchaikovsky's Nutcracker Suite. A blurb:


Last night at the Joyce Theater, Michelle Dorrance was the latest choreographer to throw her hat into the Nutcracker ring. There have been countless balletic versions, hip hop Nutcrackers, burlesque Nutcrackers, so many different Nutcrackers that it begs the question: does the world really need another Nutcracker? Turns out the answer is yes, if it's as clever and well-done as Michelle Dorrance's version.

I also reviewed the classic NYCB Nutcracker for bachtrack.  Review is here. Lauren Lovette was the Sugarplum Fairy, Joseph Gordon the Cavalier, and Unity Phelan the Dewdrop. A blurb:


In the grand pas de deux, both Lovette and Gordon paid attention to epaulement and classical line and sailed through the challenges of the choreography with polish. Artistic directors Jonathan Stafford and Wendy Whelan have restored some details to this pas de deux, like the distinct stop before the Sugar Plum Fairy does a lavish backbend and promenade. Gordon and Lovette performed this stop with perfect timing.

I also attended two other NYCB Nutcrackers. One was in the first weekend and the other was last night -- the long-awaited return of Tiler Peck from injury. Peck is coming back from a devastating back injury and she was not 100% -- there was a lack of speed, flexibility, and freedom in her upper body. But she'll no doubt get there.

Since Nutcracker prices have risen so dramatically I think I'll just highlight some of the best things about the three Nutcrackers I saw by echoing legendary SAB teacher Andrei Kramarevsky who was famous for yelling "EXPENSIVE!" when he saw students dancing well. So here goes ...

Miriam Miller, Emily Kikta and Emily Kikta as Coffee : K*ch Theater beverages EXPENSIVE! Both were leggy and sultry and their variations was a jolt of caffeine after years of suffering through unmemorable Coffees.

Alston McGill as Marzipan: $25 Nutcracker Mug EXPENSIVE! It's difficult to make the Marzipan variation look easy, but Alston McGill did just that. Those hops on pointe, the triple pirouettes, the gargouillades ...

Daniel Ulbricht as Candy Cane: $40 Nutcracker Spin Ornament EXPENSIVE! Hard to believe how many years Ulbricht has been dancing Candy Cane considering the energy he expends every time doing this variation. Respect.


The children: Charlotte Nebres (Marie), Tanner Quirk (Prince), Reed Quimet (Fritz) was the cast I saw 2/3 times and they were $95 fifth ring seats EXPENSIVE! Nebres was sweet and soulful, Quirk handsome and so articulate with the mime, and Reed Quimet stole every scene he was in as Fritz. Not to mention all the Angels, Little Mice, Candy Canes, and Polichinelles who were flawless in every performance.

Indiana Woodward as Dewdrop: $135 Side Arm First Ring EXPENSIVE! For years Tiler Peck, Teresa Reichlen and Ashley Bouder have set standards of excellence as Dewdrop. Indiana Woodward has joined that small group of Dewdrops who combine grace, speed, precision, and joy in making Balanchine's Waltz of the Flowers the choreographic highlight of Act 2. Won't someone please promote her to Principal? She deserves it.

Restoring choreographic text: $190 Orchestra Seats EXPENSIVE! This year all three Sugarplum Fairy/Cavalier duos I saw (Hyltin/Veyette, Lovette/Gordon, T. Peck/T. Angle) restored the pause before the backbend promenade in the Grand Pas de Deux. It's at 3:15 in this old video with Diana Adams and Nicholas Magallanes. This belies the canard propagated by some NYCB alumni that today's NYCB dancers don't care about fidelity to Balanchine. An extra $45 Nutcracker Globe EXPENSIVE to Joseph Gordon for doing the pause the most seamlessly. 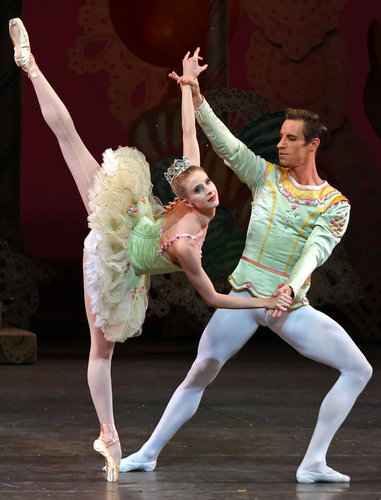 Sterling Hyltin as Sugarplum Fairy and Andrew Veyette as Cavalier - $300 Orchestra Seats EXPENSIVE!I These two dance the grand pas de deux with such beauty and freshness that it's hard to believe that the first time these two did this together it was 13 years ago and Harrison Coll was the little Nutcracker Prince. Hyltin remains the most magical of Sugarplum Fairies. Her sweetness and charm, the lightness of her jumps and grace of her movements are hard to top. Veyette is finally returning to form after long layoffs from injuries and (for awhile earlier this year) a stint in rehab. This was the first Nutcracker I saw and together with Indiana Woodward as Dewdrop it was by far the best Nutcracker I saw this season.

And last but not least, the fabulous Josette Wiggan-Freund's Dance of the Sugar-Rum-Cherry: $130 Joyce Theater Nutcracker tickets EXPENSIVE! Wiggan-Freund is nothing like Balanchine's warm Sugar-Plum-Fairy. She's sexy, dynamic, with legs to kill. Don't miss her in Dorrance Dance's fabulous tap Nutcracker.


Opening night was a blast! So grateful for the opportunity to explore and create in such a safe and supportive space. Michelle @mashdeez and Hannah @boediddly, I love you two beyond words! Thank you for this amazing process! Here's how!!!!!!
A post shared by Josette Wiggan-Freund (@josette_wiggan_freund) on Dec 19, 2019 at 12:15am PST


ETA: on December 30 I inadvertently saw the last ever Nutcracker with Ask la Cour and Teresa Reichlen. I've seen La Cour do the Cavalier a number of times with Reichlen and in this final performance they were ENTIRE NUTCRACKER BUDGET EXPENSIVE!!! Reichlen was radiant with ballerina authority La Cour partnered her beautifully. Talk about saving the best for last.


My supreme Plum, my dazzling Dew, my cool down and my kisses goodbye to this one. Amazing energy from the whole cast. Starting off the farewell tour on the right foot. 10/10/2020 Save the date. It's going to be epic! Tak for kaffe Photo credit: the one and only @kristenlakurie who continues to be the reason why I get out of the bed in morning (to make her coffee and breakfast) ••• #farewelltour #atthesamehouse #nycballet #nutcracker #makingmemories #enjoyingthejourney #grateful #thankful #ballet #justimagine #nofallenangels
A post shared by Ask la Cour | NYCB (@asklac) on Dec 30, 2019 at 8:13pm PST