Agrippina: In Which I Brave Baroque Opera Seria

Four hours later, baroque opera seria is still decidedly not my thing. But I am glad I got to experience Handel's satirical opera with a shockingly modern libretto by Cardinal Vincenzo Grimani. Especially because the afternoon also contained some wonderful performances and an amusing production by Sir David McVicar. Grimani's libretto has no likable characters -- everyone is treated with the contempt they deserve. They scheme, they bumble, they sleep around, and at the end of the opera it's clear that the New Leader is no better than the Old Leader. Since this performance was being beamed across the world in HD all the performers seemed to be giving their all.

McVicar's production is actually not new -- it premiered 20 years ago. It's an update -- characters are in modern dress while John McFarlane's sets have imposing stone columns that suggest Roman antiquity. The centerpiece of the set is a golden staircase that leads up to an empty throne. It nicely evokes the decadence and cruelty that were associated with Roman emperors.

McVicar does his best in livening up a very static format -- just to be clear, it's four hours of nothing but A-B-A da capo arias. There's very few ensembles or duets to mix things up. In his vision of Agrippina everyone is boozed up, coked up, oversexed, and downright stupid. The production has many sight gags that had the audience laughing throughout the afternoon -- dancing generals, bouquets of flowers that are tossed aside like trash, characters who bump, grind, and twerk. Nerone (Kate Lindsey) is a coked up punk rock star -- Lindsey sings her big aria "Come nube" while furiously snorting lines of coke. The love quadrangle between Claudio/Nerone/Ottone/Poppea is portrayed with broad sitcom strokes. In the second act while Poppea and Ottone are drinking their sorrows away Bradley Brookshire played an onstage harpsichord that doubled as a piano would at a bar/lounge. Purists might object but I found the production engaging and fun.

As the rapacious Agrippina Joyce DiDonato was amazing. She was a combination of Mama Rose and Nancy Pelosi in her indomitable ambition. The voice is not easy on the ears. There's a heavy intrusive vibrato, a huskiness in her low notes, and a hard, pressed sound in her upper register.

But DiDonato is a baroque expert and know how to sing all those micro-notes AND how to wring the maximum drama from her arias. Handel wrote a huge emotional range for Agrippina's arias -- she can be charming (in "Tu ben degno"), she can be evil ("Ogni vento ch'al porto lo spinga") and she even has a moment of self-awareness ("Pensieri, voi mi tormente"). DiDonato tended to emphasize the hard, aggressive side of Agrippina's personality -- she drove her voice with brute force at times. I would have liked to hear a lighter touch in some of the arias. But it was a dominating performance. DiDonato appeared to be having fun with the stage business of the production. This is one of the best things I've seen DiDonato do.

The other standout was Kate Lindsey as Nerone. She's almost unrecognizable underneath the punk rock wig and tats. Lindsey threw herself into the stage business of the production -- the simulated masturbation, the twerking, the bumping, the grinding, the coke snorting. Nerone as a wastrel trust fund brat rings true. Lindsey sings "Quando invita la donna l’amante" while doing side planks. When he ascends the throne at the end of the opera it's telling that Nerone is silent while Agrippina gets the last word. Lindsey's voice was occasionally taxed by the demands of Handel's music but it was a compelling portrayal. Her plummy mezzo was always pleasing to the ears.

The character that has the most development is actually Poppea. She starts off as a sex kitten, but soon learns how to scheme and plot with the best of them. Brenda Rae looked like a dream and she acted well -- you could sense her discomfort when being chased by Claudio (Matthew Rose), as well her gradual gain in confidence as the plot progressed. Rae's voice however is too ordinary in sound to do justice to Poppea's many glittering arias. She has a bright brilliant top but a rather colorless, constricted middle. Arias like her opening number "Vaghe perle" in which she describes herself as a "beautiful pearl" failed to register because Rae's voice simply couldn't take us there.

Iestyn Davies as  Ottone (the only "square" of the bunch) also had a series of beautiful heartfelt arias for which his voice couldn't quite do justice. Ottone was originally sung by a contralto. Such a different sound than the light, delicate countertenor voices. Davies'  voice is lean and monochromatic, and doesn't sound like the honorable Roman general of the opera. Davies was fine in the elegiac moments of the opera like the aria "Voi che udite il mio lamento." But the voice just wasn't interesting and after awhile I admit I started tuning out of Ottone's arias.

The two most amusing characters onstage were the pair of foolish Roman generals Palante (Duncan Rock) and Narciso (Nicholas Tamagna). They were besotted with Agrippina, and whenever they were onstage the audience laughed. Not just because of McVicar's stage production but because the libretto is so strong in portraying these two knuckleheads. Both Rock and Tamagna were vocally very strong.

Matthew Rose as the empty suit emperor Claudio was a delight to hear. His deep bass was the only voice that was really a Met sized voice. I'm not enough of a baroque expert to say whether Rose really sang Handel's music that accurately.

I'm also not enough of a baroque expert to comment on Harry Bicket's conducting. I will say that the Met orchestra sounded almost as "period" as John Eliot Gardiner's Orchestre Révolutionnaire et Romantique did performing the Beethoven symphony cycle at Carnegie Hall and that's no mean feat. (By the way JEG's Symphony No. 9 featured Matthew Rose as bass and he sounded wonderful there as well. And the performance earned a 10 minute standing ovation. Beethoven rules. But that's neither here nor there.)

So at the end of the four hours I was still alive. The afternoon of baroque opera seria was amusing, funny, and very very long. It won't ever be my thing, but at least I (sort of) conquered this particular phobia.

I also met up with some internet friends. I am totally not showing this pic off because I like my color coordination: 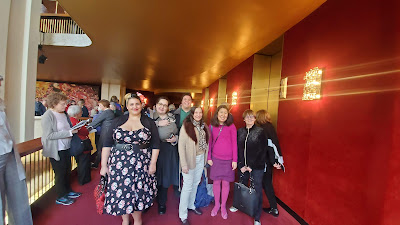