On September 21, 2021, it seemed as if every single balletomane was stuffed into every last corner of the David Koch Theater. NYCB was making its comeback onstage after going dark for nearly 18 months. When the opening chords of Serenade started and the 17 girls held up their hands, the audience burst into ecstatic applause. I had a lump in my throat.

Emotions ran so high that the actual quality of the performance barely mattered. But once the endorphins died down and the program progressed to Symphony in C, one had to admit that the company looked a bit ragged. Pandemic rustiness was not limited to us plebes -- ballet dancers also had difficulty getting their arabesque to 90 degrees, difficulty getting off the floor in jumps, difficulty dancing with the freedom and expansiveness that the repertory required.

It was quite a relief then that four weeks later, the fall season closed with a farewell to retiring ballerina Maria Kowroski and the company looked like itself again. Performances were sharp and cohesive, with the fast footwork for which the company is renowned. I'm not going to review individual performances -- that's what my bachtrack reviews are for. It is time, however, to post an appreciation to the four principal dancers who retired during this season (Abi Stafford, Maria Kowroski, Lauren Lovette and Ask La Cour), and also the radiant, sunny soloist Lauren King, who also retired. They will be missed.

Maria Kowroski's farewell was the splashiest -- it seemed as if every NYCB alumni made the trip. Eddie Villela, Jock Soto, and Damian Woetzel were among the three prominent alumni I saw in the audience. It was also the most predictable. Maria's career has been in a graceful twilight for a few years, and while the farewell showed off what she could still do (whip her gorgeous legs in DGV, dance with melting lyricism in the Chaconne pas de deux), the time was right for her to retire. She brought the house down as the Striptease girl in Slaughter on Tenth Avenue. It was a very happy end to a happy career.

Maria was actually in one of the first NYCB performances I attended -- I remember it well. She danced Diamonds. This was maybe in 2003? It was a shaky performance -- she fell in the scherzo and looked out of sorts. I would return to see Maria in Diamonds numerous times. It was a joy to see her grow in this role over the years -- from the queenly beauty she exuded in the early years to the warmer glow of her last performances. The performances she gave after she was coached by Suzanne Farrell were transcendent.

And: her legs! Her hair! Her face! That arabesque! She looked like what you imagined a ballerina to look like. She also had wit -- she was the funniest Titania I ever saw, the sexiest Stripper in Slaughter, the goofiest "hat girl" in The Concert . She was one of the few ballerinas who could make you laugh. And so during her farewell when she gleefully wiggled her "jazz hands," you realized why she was so special.

Lauren Lovette's retirement was in many ways the opposite of Maria's -- Lauren's only 29, and should be at the peak of her career. But she's leaving to focus on choreography. An Instagram post revealed possible unhappiness as a dancer -- she said, "I am ready to be challenged in fresh ways in a place I feel more valued as an artist and inspired as a ballerina. To put work into the next decade of my dancing in a more mentally healthy environment and to learn some unfounded skills of refinement for my craft."

Lauren's dancing was always graceful, lyrical, charming. She was never really a technical whiz-bang -- she was often exposed in roles that required massive amounts of technique. But she always remembered to point her toes, to stretch her fingers, to smile at the audience. I really loved the warmth and sweetness of her Sugarplum Fairy. I look forward to her career as a choreographer -- so far, what I've seen has been interesting.

Ask la Cour also retired after a long career at NYCB. Ask is one of those dancers who actually improved with age -- when he first joined the company, there was a lot of chatter that he was Peter Martins' stepson. And for many years he was treated more as a character dancer and soloist than a principal -- he was always cast as the father in Nutcracker, for example.

But after Peter Martins left, Ask seemed to enter an Indian summer. His dancing was stronger, more confident. He was often paired with Tess Reichlen and their partnership had a lovely, mature quality. He and Tess danced one of the most beautiful Nutcracker pas de deux's I ever witnessed. He also had a gift for comedy. I loved him as the dopey Prince in Firebird. It was fitting that he partnered Tess in his farewell. They danced Monumentum and Movements. They looked like statues come to life. It was breathtaking. He looked like he could have danced another few years, easily. He's leaving the stage before the stage leaves him.

As for Abi Stafford, she hasn't danced much in recent seasons. She came back for a brief farewell -- she danced the Green Girl in Alexei Ratmansky's Russian Seasons. Her dancing was always technically strong, and so it was for her final performance. But Stafford is in many ways a trailblazer -- she leaves a career in ballet to become a lawyer. One admires the toughness, intelligence, and bravery it must take to switch careers after 20+ years in the dance world. My favorite dancing memory of Stafford is her in Summerspace. She captured the Merce-isms of the work so well, and looked so happy in that famous "duck" pose. 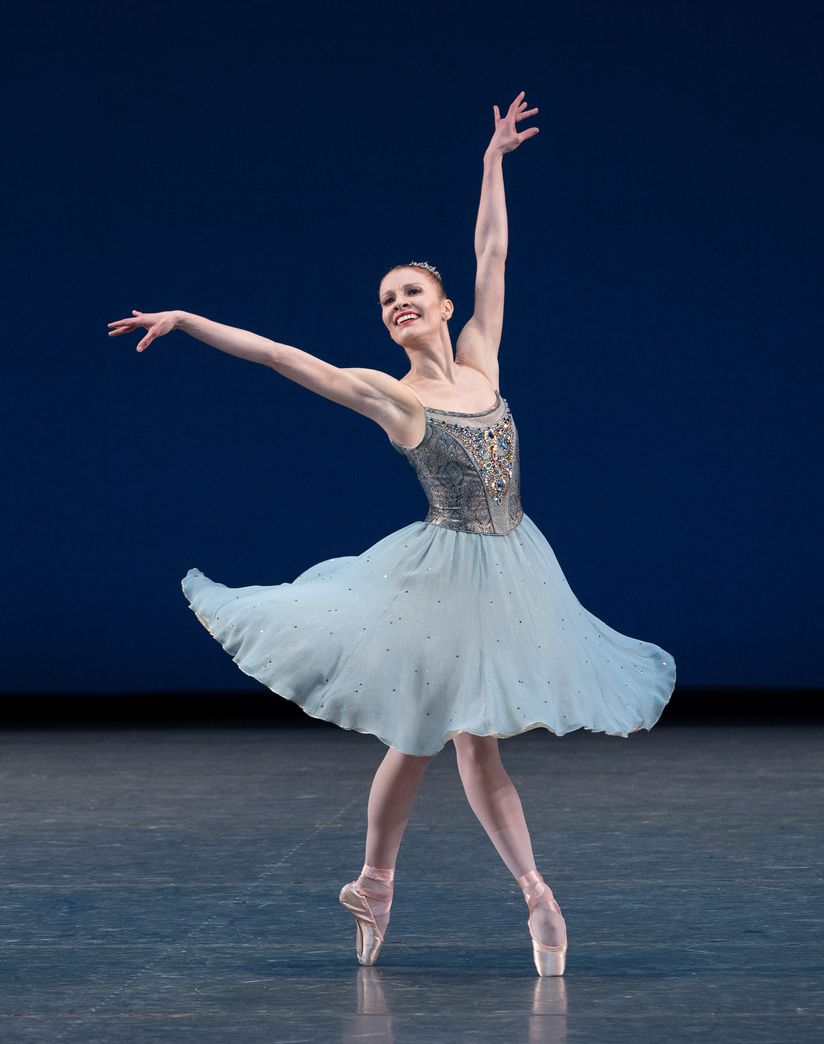 The dancer I will personally miss the most did not get a splashy farewell. She danced the First Waltz in La Valse, and then she was gone. At the end of the ballet she got a solo bow with a tiara. But veteran soloist Lauren King's quiet retirement was a sad surprise. King wasn't a principal, but she was a flagship soloist. In every role she danced she was radiant, always smiling and sunny. Her megawatt grin projected from the stage to the last row of the Fourth Ring. I loved her as the "turning girl" in Piano Concerto #2, the 4th movement girl of Symphony in C, the Blue Girl of Dances at a Gathering. She made a great debut a few years ago in Emeralds. Because she was rarely if ever injured, and because of her many soloist assignments, it was quite possible to see Lauren King dance almost every night in a season. It will be strange not having Lauren King onstage to brighten up a performance.

Along with these farewells the company finally promoted a few extremely deserving dancers -- Indiana Woodward and Unity Phelan to principal, Roman Mejia to soloist. Phelan is tall, blond, wispy, a natural to take over the Kowroski rep. Woodward is petite, brunette, bubbly -- a natural to replace Lovette's repertory. Mejia is just a phenom -- he knocked everyone's socks off with his debut in Other Dances. Bright futures ahead for them.

A few videos I took of the farewells: