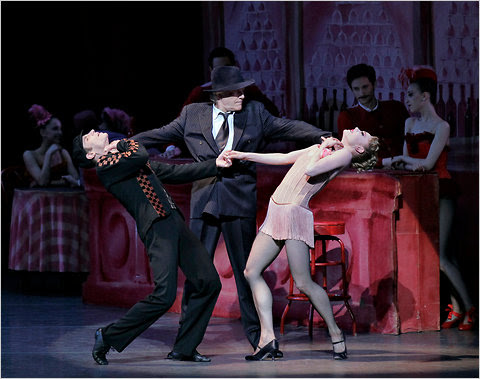 Due to some unforeseen circumstances I've had to severely restrict the number of performances I'm able to attend of anything. I decided however to allow myself one performance in the New York City Ballet's fall season, and I chose last night's program of "Short Stories" as that one fall performance. Great pick!


I chose the La Sonnambula/Prodigal Son/Slaughter on Tenth Avenue program simply because they are not ballets I have seen in quite some time. The last time I saw La Sonnambula it was with a wan Yvonne Borree and I remember the ballet as being a bit disjointed and even silly. One of ballet's most common themes is that of the ghostly female spirit (think Giselle and La Sylphide). At the time I saw La Sonnambula I thought that the ballet wasn't as moving as Giselle or La Sylphide so I dismissed it.

Well, what a difference a new cast makes! La Sonnambula still isn't my favorite Balanchine, but I no longer think of it as second-drawer anymore. Last night Sterling Hyltin made her debut as the Sleepwalker and her feather-light, super-fast skimming bourrees made her seem like a paper-thin spirit, an unforgettable presence but not quite of the flesh. One could see why the Poet (a dashing Robert Fairchild) was so taken with her. But it wasn't just Hyltin and Fairchild who shone in this ballet -- Faye Arthurs was a stunning Coquette, sexy and alluring, and the Divertissements featured a pas de deux with Lauren Lovette and Craig Hall that nearly stole the show. NYCB is now so strong on every level that even small roles are strongly cast.

Prodigal Son was in contrast a disappointment. Daniel Ulbricht has the jumps and explosiveness for the role. He even looks the part, with his short muscular frame and youthful face. What he doesn't have is the soul. There's no sense of growth or a spiritual journey from him. He approaches the role as if he were dancing Jester in some production of Swan Lake. Maria Kowroski as the Siren unfurled those famous legs and spidery flexibility. But maybe she's danced this role too many times? It seemed kind of routine. Actually I think perhaps this whole ballet needs some re-coaching -- the dancers approach it with an overly broad, generalized manner that takes away from the bite of Balanchine's early seminal masterpiece. As it stands now, the ballet looks a little (dare I say it?) ... cheesy?

The evening ended with Slaughter on Tenth Avenue, which I don't think dancers can kill if they try. It's more Broadway than Ballet, but what fun, quality Broadway it is! The score by Richard Rogers is delightfully brassy, and Balanchine's choreography is a hilarious parody of the 1920's vaudeville scene. I also love the classic Broadway "fake close" with the company cast reprising a final production number. It's so fun to see the NYCB let their hair down and just put on a fun show. Sara Mearns was voluptuous and sexy as Striptease Girl, and Andrew Veyette, a dancer I often associate with bland competence, looked to be having the time of his life as the hoofer. I adored Justin Peck as Big Boss as well. Evening ended with the entire audience clapping and cheering along to the Hoofer's repeated dance as he tries to avoid being shot. Wonderful way to close a performance.