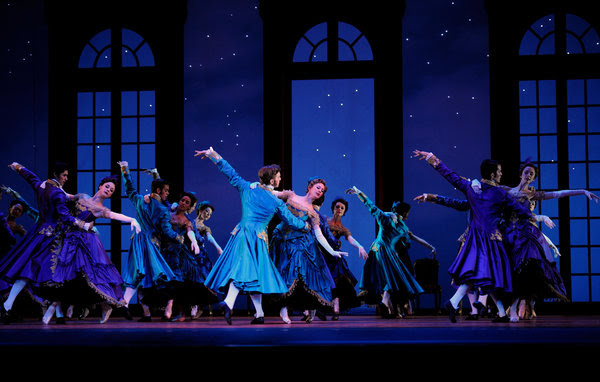 The San Francisco Ballet is ending its two week engagement at the NY Koch Theatre with a week-long run of Christopher Wheeldon's Cinderella. Many choreographers, from Frederick Ashton to Alexei Ratmansky have tried their hand at adapting Prokofiev's haunting, expressive score to the ballet stage. The well-known fairy tale also makes this ballet catnip for choreographers and ballet companies.

Wheeldon's Cinderella is visually arresting and aesthetically pleasing. The sets and costumes by Julian Crouch are among the production's main attributes. Wheeldon shows himself off as a choreographer with a promising gift for narrative ballet -- his Cinderella never becomes maudlin. The production values are high -- this looks like an old-fashioned fairy tale ballet. There's even imaginative use of puppets. I saw many parents with kids.

The ballet benefits from a script by Craig Lucas. One of the most beautiful motifs of his Cinderella is the tree that springs to life at Cinderella's mother's grave -- it returns again and again to give Cinderella guidance and love. Maybe the most memorable moment of the ballet is at the end of the first act, when the tree is transformed into a carriage for Cinderella. The Four Fates that shape Cinderella's destiny are a modern but acceptable alternative to the outdated Fairy Godmother concept. The script also takes a risk by foregoing the traditional slapstick of the two stepsisters. In his version, one of the stepsisters (Clementine) is afforded a heartwarming love story of her own. The Prince's storyline is also more fleshed out -- there are scenes of his childhood friendship with his valet Benjamin that run parallel to scenes of Cinderella's childhood life.

It's a shame then that amidst all this beauty and thoughtfulness someone seems to have forgotten that the hallmark of a great ballet is not the costumes, the story, or the symbolism, but the choreography. Christopher Wheeldon CAN be a choreographer of great inventiveness: witness the haunting pas de deux in "After the Rain":

The choreography in Cinderella, on the other hand, was unfailingly trite and unmemorable. Wheeldon takes no risks but there's no reward either -- if you like a very visually pretty "story" ballet with a well-known score and inoffensive choreography Cinderella might be for you, but dance enthusiasts will be searching for more meat with the sauce. The waltzes have ... a lot of waltzing. The ball scene had some "divertissements" that again looked like throwaway choreography. Every other step looks like every other step before. The stepsisters are unattractive because they dance with ... flexed feet! Cinderella herself is afforded almost no solo dancing -- she is carried around much of the time by the Four Fates and in the pas de deux is simply lifted again and again. They aren't even inventive lifts -- they're just basic shoulder lifts. One of the most memorable passages in Ashton's Cinderella is Cinderella's dance with the broom. Wheeldon's Cinderella has no such moments that establish the heroine as lovable -- when the Prince and Cinderella marry at the end of the ballet, my first thought was they'd bore each other till death did them apart.

Now here's the thing: there are many, many ballets where the mime and dramaturgy are so rich that a little choreographic emptiness is more than compensated for -- Ashton's A Month in the Country, for example, has almost more mime than dancing, but what a dramatically rich work it is! Christopher Wheeldon as I said has that "new choreographer" distrust of mime and drama, but he doesn't fill out his Cinderella with memorable choreography. Instead it's empty steps upon more empty steps. The visually appealing production can't make up for the weak tea dancing. Watching Wheeldon's Cinderella is a bit like meeting a person who is very handsome but has a deadly dull personality. Wheeldon's generically inoffensive choreography also has the effect of making Prokofiev's score sound ponderous and repetitive. When the score is not filled out with steps that work with the music, even the greatest music in the world can sound like background filler.

The cast I saw (Frances Chung as Cinderella, Carlos Quenedit as Prince Guilliaume) projected absolutely nothing. Chung was actually so dramatically blank that she was overshadowed by Sarah van Patten and Shannon Marie Rugnani as the Stepsisters.