There was a nasty blizzard that hit NYC yesterday morning and didn't abate until early the next morning. That didn't stop many dance lovers from attending the start of New York City Ballet's always highly anticipated Winter Season. Winter Season is always an exciting time for dance lovers -- after nonstop Nutcrackers, "real" ballet is back! Last night opened with an all-Balanchine bill of Concerto Barocco, Kammermusik No. 2, and closed with the evergreen Who Cares?

First things first: a few coordination problems between the 8 Concerto Barocco corps girls aside, this company looked in great shape. The male and female corps of Who Cares? was snappy and energetic. This bears repeating: what a great company!

Concerto Barocco was first up on the bill. Maria Kowroski was the first violin, Sara Mearns the second violin, and Tyler Angle the male cavalier. This ballet always seems (like so many Balanchine ballets -- think Serenade or Symphony in Three Movements) to be about a mysterious female sisterhood. The way the two soloist "violin" women alternately parallel and compete with each other, the close way the corps de ballet girls snuggle together or link hands, suggests women who share an unexplainable bond. Kowroski and Mearns as the violins were great foils for each other -- Kowroski  elegant and graceful, Mearns aggressive and sharp. I only wish their body lines matched more. But you can't have everything. Kowroski is in an Indian summer in her career. The unsteadiness that plagued her earlier is gone, and now she's just able to show off her strengths -- the pliancy of her back, her gorgeous legs, and the sweetness of her stage personality. Her partnering with Tyler Angle in the pas de deux was seamless -- he steadies her, shows her off. I hope they are partnered together more often, they compliment each other beautifully. 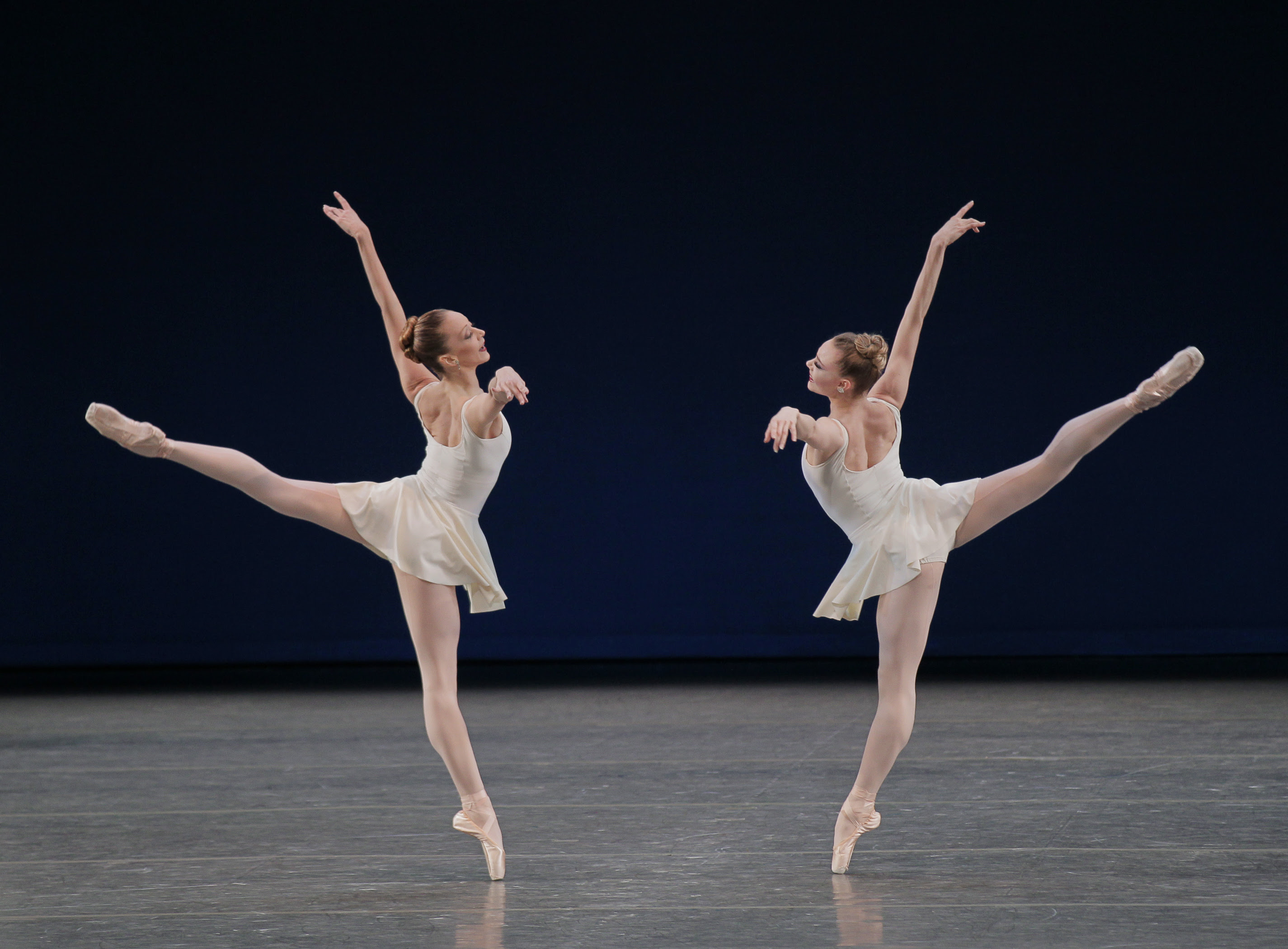 I had never seen Kammermusik No. 2. Now I've seen it and that's enough. It's second-drawer Balanchine. Actually, let me take that back -- it has some good Balanchine choreography, but the music by Paul Hindemith is monochromatic and never builds to anything.  Balanchine was able to work with many "un-pretty" scores throughout his career but those masterpieces (Agon, Symphony in Three Movements, Episodes) built in tension. Kammermusik No. 2 starts off well and then flattens in impact. So interest sags before the 10 minute mark and that's bad if it's a 20 minute ballet. I like the cheerleader/football athleticism Balanchine put into the choreography. The row of male corps crouch, heads down, like the defensive line of scrimmage of a football team. But as I said, the ballet does not build, and the prancing/skipping/jogging/kicking themes of the two cheerleading ladies become as tiresome as the unmelodic, abrasive score. The soloists also didn't illuminate the choreography. The joyless, grim Rebecca Krohn (miscast in a role that requires more pep and cheer) took a spill, Abi Stafford was her usual boring self. The men (Amar Ramasar, Jared Angle, plus the wonderful line of male corps) were better. But as I said, this is B-list Balanchine. 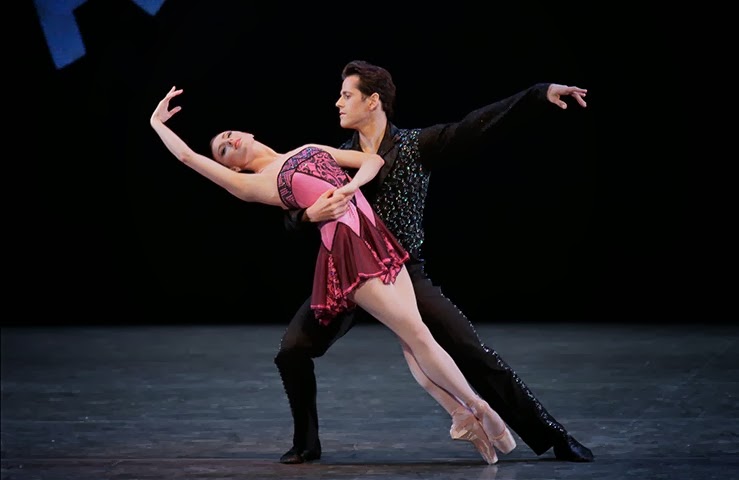 Who Cares?, however, is a masterpiece from start to finish and a great closer for the program. Balanchine supposedly named the ballet as a back-handed "tribute" to Suzanne Farrell, who a year earlier had left the New York City Ballet and plunged Balanchine into a deep depression. Who Cares? was his way of saying, "I'm back!" The ballet gives a chance for the whole company to shine, and shine they did, despite the new yucky Santo Loquasto costumes, which haven't improved with repeated viewing. Lauren King and Devin Alberda were delightful in "Oh Lady Be Good." The heart of the ballet, however, has shades of Apollo, as it centers around a male soloist (Robert Fairchild) and three "muses" (Tiler Peck, Teresa Reichlen, Ashley Bouder). The most well-known duet is "The Man I Love." It's become a trademark for Robert Fairchild and Tiler Peck. They were, as always, incredible. Both of them exude this all-American wholesomeness, while at the same time moving with grace and lyricism. Their chemistry is off-the-charts. Peck and Fairchild have perfected this act -- they don't smile or make moony faces at each other. There's a slight distance and mystery between them at all times, like two lovers who are unsure of how the other feels. The he-loves-me-he-loves-me-not theme of the pas de deux was never clearer than when Peck would back away from Fairchild and then run (or turn) back into his arms. They handled the two leaps to Fairchild's back so smoothly that there was time for Peck to perch on Fairchild's back. When Fairchild finished the duet with a rotating lift of Peck, there were more than a few sighs. Peck then continued to defy the laws of motion in her solo "Fascinatin' Rhythm." She's one of the rare ballets who is, as Arlene Croce said of Suzanne Farrell, "always off-balance, always secure." Peck can often begin a pirouette at an off-balance angle and one thinks she'll fall, but she never does. She can be perfectly still one minute and then move so fast your eyes can barely keep up. Brava.

Teresa Reichlen was absolutely stunning and beautiful in the von Aroldingen role. She's a little too tall for Fairchild to partner in "Who Cares?" but her solo to "I'll Build a Stairway to Paradise" had none of the crudeness that sometimes seeps into this solo. Ashley Bouder had great sass and fouettes in "My One and Only" and it was a rare treat to see her partnered with Fairchild in "Embraceable You." Fairchild's own solo (to "Liza") always seems a bit anti-climactic after all the great duets and solos, but the finale was fantastic and fun, and audience response was warm.