Ah, spring season of dance in NY. It's a time when people often have to replicate King Solomon and split the baby. "Ok, I'll choose to see NYCB Tuesday and the ABT Wednesday," they say, shedding real tears in the process. First world problems, but it can be painful.

The NYCB often makes these choices even more painful by springing exciting last minute debuts with almost no advance notice. Or they will bring back a ballet into the repertory that's beloved by dance mavens but hardly ever done. Such was the case this week when they presented three different casts of their all-Balanchine program of Raymonda Variations, Steadfast Tin Soldier, Le Tombeau de Couperin, and Symphony in C. I attended the last two casts, the Sunday matinee (5/11) and tonight's performance (5/13).

Raymonda Variations is one of several Balanchine works inspired by Glazounov's lovely score to the full-length Raymonda. Raymonda is one of Marius Petipa's finest choreographic creations, and the score is one of ballet's finest. What's wrong then? Well, the story-line is, um, boring. And racist. It has a wildly offensive subtext of Muslim men being rapists. Mr. B, being a smart sort, simply poached the loveliest sections of scores and voila! He had a new miniature ballet.

Raymonda Variations opens with the familiar Karinska pepto-bismol pink tutus, before the lead couple come onstage in the even more familiar Karinska lime-green coloring. You would think the ballet is slightly fey and frou-frou. But it actually provides 8 delightfully tricky variations for both the lead couple and promising soloists/corps de ballet.

The first cast I saw was spectacular. Ashley Bouder has so much authority -- she's almost masculine in the way she commands the stage. And I mean this in a good way. There's no simpering prettiness from her -- this is a ballerina who has no fear. Andrew Veyette is such a good partner for her. In one of the behind the scenes NYCB videos he said that they were the "small couple" which is a rather humble way to describe a partnership, but it's obvious he knows how to show off Bouder. Their opening pas de deux was so beautiful, so secure. I also loved Bouder's big leap into Veyette's arms to close the ballet. Bouder's second variation is a series of pique turns/jumps followed by a diagonal of pas de chats. The tricky turning and jumping was no problem for Bouder, who tossed if off as child's play. Veyette's own variation is almost a wholesale rip-off of the Bluebird variation, and he doesn't really have the right amount of ballon for that kind of variation. The other soloists were just exquisite. Almost all of them brought a lightness and bounce to their solos which matched Glazunov's bubbly score. Sara Adams (Variation I) deserves a gold medal for sailing across the stage in hops on pointe in arabesque with breathtaking speed and grace. That's one of the joys of watching NYCB -- watching the bunheads grow and develop.

The 5/13 performance featured the debuts of Lauren Lovette and Anthony Huxley in the leading roles. Lovette is almost Bouder's opposite. Bouder has strong, muscular legs and feet that give her that elevation and ballon. Lovette has exquisitely tapered limbs with beautiful arched feet and a uniquely lyrical quality to her dancing. Huxley has more ballon than Veyette, but is not as solid of a partner. Their opening pas de deux had some bobbles, and the ending leap was timid. Lovette also showed some debut nerves in her second variation. She kind of ran out of steam in the series of pique turns/jumps and didn't make a full circle around the stage. She's a lovely performer though, and I'm sure she'll grow in this role. The other variation soloists were not as strong as the 5/11 performance. None of them were bad, but they didn't sparkle. Ashley Laracey stood out in the harp solo (Variation V) but the others were not that distinguished.

Steadfast Tin Soldier and Le Tombeau de Couperin are not really my favorite Balanchine, but they improve upon viewing. Tin Soldier is cute (especially when the doll is danced by Megan Fairchild, the Mary Pickford of NYCB) until the unexpectedly sad ending. Sunday's cast had Fairchild really dancing the hell out of the paper doll role, but Anthony Huxley seemed labored in his difficult series of double turns in the air. Tonight's cast had Erica Pereira (okay, but not as articulate as Fairchild) and Daniel Ulbricht, who showed what this role can be.

Le Tombeau de Couperin is interesting mostly because it's entirely the work of the corps de ballet, who weave in and out of a set of patterns that seem to be based on baroque court dances. The corps de ballet did an absolutely amazing job both nights. It's a long ballet, no breaks, and the corps showed why NYCB are a company. This is something the ABT will never have -- a corps de ballet that demonstrates such intimacy and togetherness. You can see how the two quadrilles mirror each other in movement and the gentle way the men set down the women after a lift.

The finale of the program is everyone's favorite ballet, Symphony in C. There are always moments in this ballet that I love so much I get shivering goosebumps every time. One is that wonderful running on pointe that everyone does in the Act Four finale. The other is that big developpe/penchee series in the Adagio. With that being said, it is possible to murder this ballet, as it requires such precision from every single member onstage. I still cringe at the horror of the ABT's attempt last year, with the awful memory of the four soloist ladies forgetting that they're supposed to pirouette at the same time in the finale. 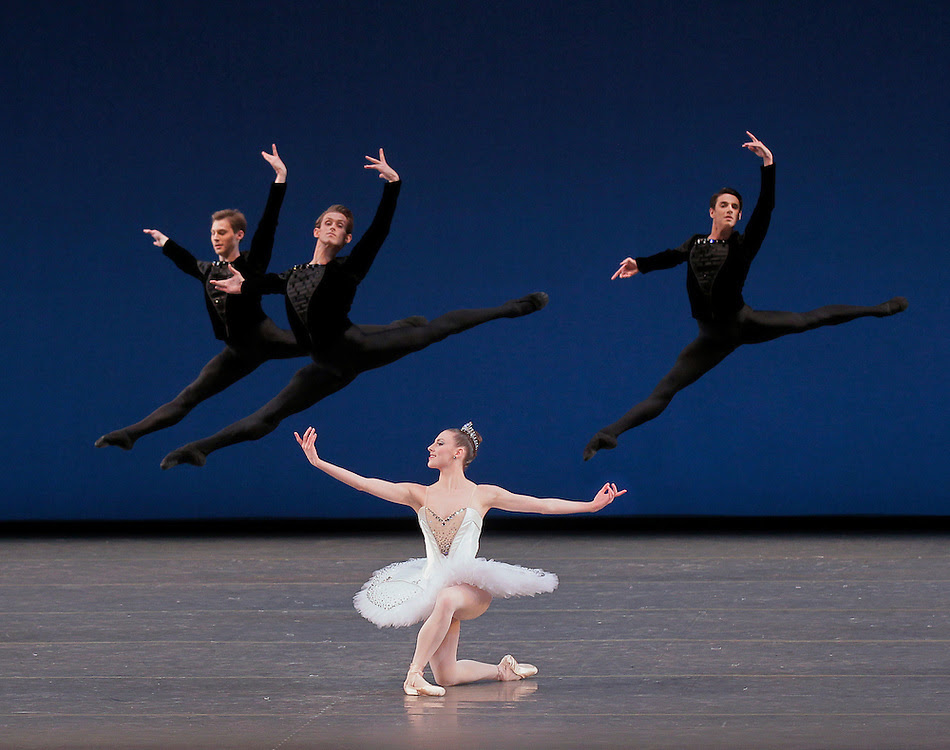 Of the two casts I saw, I thought tonight's cast was stronger. Tiler Peck and Anthony Catazaro danced the first movement in both Sunday and tonight's performance. Tiler Peck is amazing -- I could watch the way she rolls on and off pointe all day. She's so crisp and secure, sometimes you don't even notice the amazing things she does. For instance the end of the first movement usually ends with some supported pirouettes. Tiler Peck actually did an unsupported triple pirouette with Catazaro only coming in at the last second to "support" her. Catazaro had a stumble in tonight's performance but was otherwise Peck's equal.

Sunday's second movement adagio starred Sara Mearns and Jared Angle. Sara Mearns has an unusual body -- wide ribcage, shortish neck, and she doesn't have very long legs either. What she does have is a uniquely lush way of moving -- that arabesque penchee was not the most beautiful or the most extended, but the backwards lunges were heavenly. Jared Angle also does not have the most beautiful body, but he's a fantastic partner. Tonight's performance starred Teresa Reichlen and Tyler Angle. What a contrast. Reichlen is all neck and legs. In fact, she's the only ballerina since Wendy Whelan who could do the Suzanne Farrell nose-touches-knee penchee. But Reichlen also tends to move in a reserved, almost geometrical way. She doesn't have Mearns' plushness. Both interpretations have their beautiful moments. They're just different moments. And that's okay.

What set tonight's performance apart from Sunday's was the third movement casting. Sunday's third movement had Erica Pereira and Antonio Carmena. Carmena was fine, but Pereira is not much of a jumper, and this is a huge jumping role. Her jumps are weak and floppy looking, and she's not able to keep up with the allegro steps. Tonight's third movement cast was Ashley Isaacs and Gonzalo Garcia. Isaacs is just so much more confident, crisper, and she can jump. The fourth movement was also stronger tonight -- on Sunday Lauren King was charming, but she's not much of a turner, and this is a big turning role. Ashley Laracey in tonight's cast seemed much more comfortable with the turning diagonal. The finale always brings such joy to my heart. If I could bring one ballet with my to a desert island, it would be Symphony in C.

Before Symphony in C began there was an unannounced but quite nice tribute to the SAB's 80th anniversary. Peter Martins gave his usual speech (if you've heard him speak, you'll know what I mean), but there was a sweet tribute video that featured both current and past SAB alumni. Mostly you see how beautiful and elegant the dancers are, even in old age. Allegra Kent, Edward Villela (seen in the audience tonight), Chita Rivera, Jacque d'Amboise, they all still carry themselves like dancers, with the proud necks and the lifted chins.
Andrew Veyette Anthony Huxley Ashley Bouder Ashley Laracey Balanchine ballet Daniel Ulbricht Maria Kowroski Megan Fairchild NYCB performance review Sara Mearns Teresa Reichlen Tiler Peck