This is a weird way to begin a review but the thing I kept thinking of at tonight's premiere of La Donna del Lago was that Seinfeld episode when Kramer is driving with George's mother and in the middle of a casual conversation he "stops short" with the car. This causes much awkwardness all around.

What does "stopping short" have to do with Rossini? Well, Rossini is one composer that (if played right) never "stops short." Bellini was maybe a better melodist, Donizetti a better dramatist, but Rossini has an implacable momentum that is always musically impressing.


You never would have known it though from the Met's plodding, joyless, arid premiere of La Donna del Lago. And for this I think the conductor Michele Mariotti has to take a lot of the blame. He consistently missed capitalizing on any of the music's momentum. Instead it was start, stop, start, stop all night. A musical number could be going swimmingly until the conductor "stopped short" and all momentum was lost.

Juan Diego Flórez made up his own rhythm and if Mariotti wasn't with him, well, so be it. The others often started and stopped, started and stopped, constantly looking to see if Mariotti had picked up his baton again. This was particularly egregious in the closing showstopper "Tanti affetti" -- Joyce DiDonato has sung this aria many times but last night seemed almost hesitant. Again, Mariotti stopped short and Joyce had to stop short as well.

With that being said, the problems of La Donna del Lago went beyond simply conducting. A basic problem was casting -- the opera's premise is that Ellen/Elena's (Joyce DiDonato) love for Malcolm (Daniela Barcellona) is so constant that she rejects the advances of both the King James (Flórez) and a rebel leader Roderick (John Osborn). Of course Ellen's that 19th century ideal of the perfect, constant female whose affections cannot be swayed either by a besotted king or a Braveheart-like warrior. Così non tutte.

In order for this to work you need a very strong Malcolm. Daniella Barcellona was not that singer. Her voice was nothing special -- a workmanlike instrument that sounded hollow and occasionally turned squally. She seemed to have trouble with many of Rossini's more difficult passages. She was hideously costumed in a ratty tatty kilt dress and they actually DREW a beard on her. No, I'm serious. She looked grotesque, and one wonders how no one put his or her foot down and said "No, a drawn on beard on a woman doesn't work." It was the most ridiculous sight I've ever seen, Joyce rubbing her face in Barcellona's drawn-on beard. 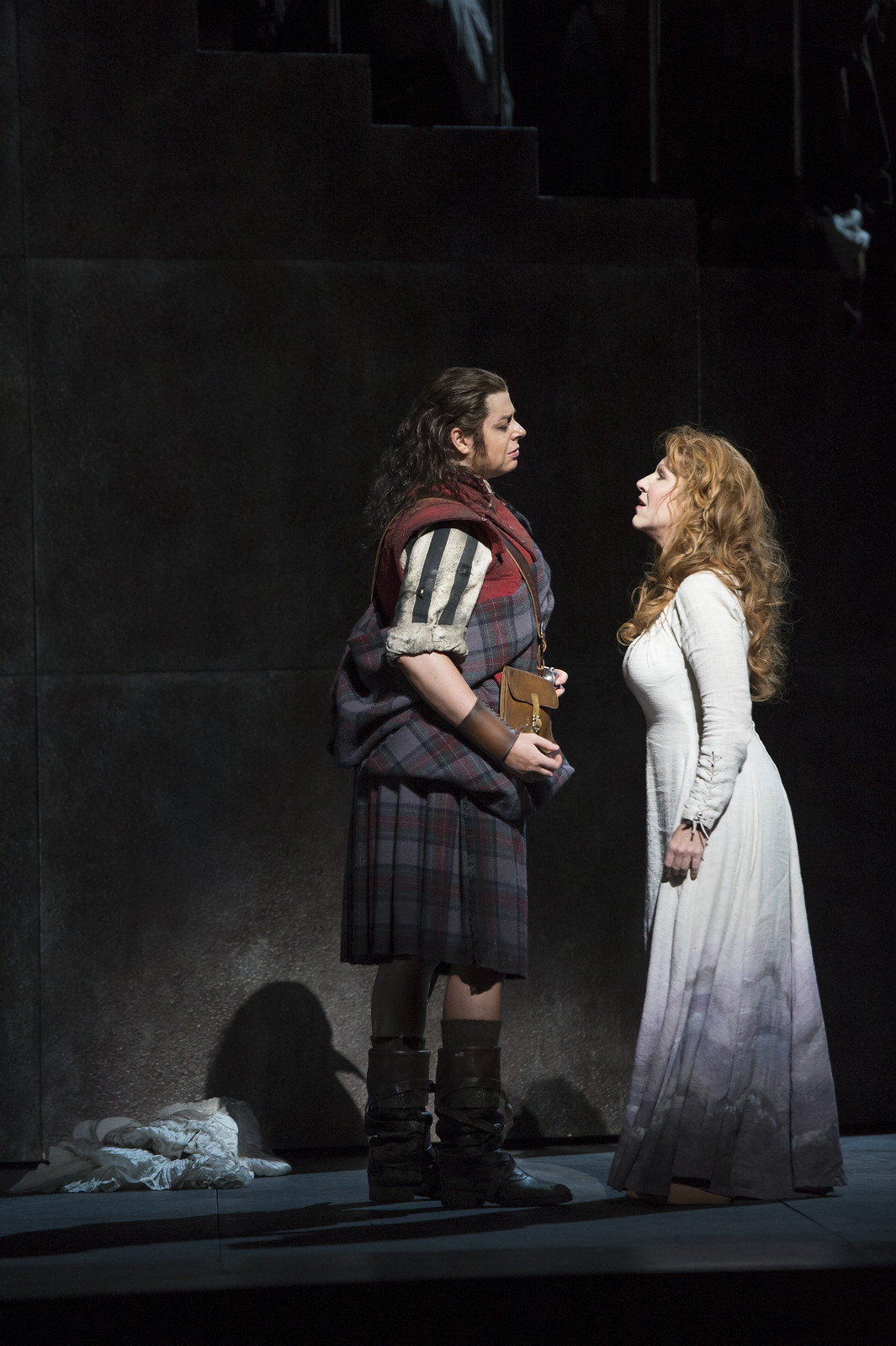 On the other sides of the quadrangle you had Juan Diego Flórez, who, twenty-odd years into his career, still sings Rossini with a matchless style and infectious energy. He didn't interpolate many acuti but since James mostly sings in duets and trios that might have been a group decision. His voice sounds less strained than it did in Cenerentola last season -- some cancellations and vocal rest seem to have done a world of good. Flórez and DiDonato have wonderful chemistry together and the rapid vibratos of their voices blend beautifully. "O fiamma soave" was beautiful. At the end of the opera one wanted to smack Ellen in the head and say, "Marry the king, you silly girl!"

Matching Flórez note for note (almost) was John Osborn, another endearingly pint-sized tenor whose voice can (mostly) handle the demands of Rossini's music. The color of his voice is darker than Flórez's but he has the same ease in the stratosphere (as well as the same nasally timbre). The only thing Osborn missed completely was a high C at the end of his act one cabaletta. He went for it, but the note wasn't there. He did the same thing in his otherwise excellent Guglielmo Tell at Carnegie Hall -- had all eight cylinders roaring, and then reached for non-existent high notes in "Corriam, corriam." From then on I noticed that almost no one else in the cast went for acuti at the end of cabalettas. The dueling duet between James and Rodrigo in Act Two was exciting vocally but someone has to tell Osborn and Flórez that their swords should face each other, not the audience.

Here's Osborn in La Scala in the same role. He's capable of so much more than we heard last night:


Oren Gradus (Ellen's father) was simply vocally unacceptable. I hate to use the word "inaudible" because sometimes I think people use it simply to mean "Oh my god his voice wasn't the size of Birgit Nilsson's" but Gradus truly was inaudible in long stretches, and when heard him, you didn't want to hear him.

I was saving Joyce DiDonato for the last because it's obvious she believes so much in this opera. It's due to her tireless championing of this opera that it's been sung (with very similar casts) in La Scala, Paris, London, Santa Fe, and now New York. But last night seemed like a very off night for her. The usual pep and energy she brings to every role weren't there, and (to be frank) neither were the DiDonato coloratura fireworks. She was fine singing in the lyrical passages like her opening cavatina but in the more barn-storming passages like the act two terzetto and of course "Tanti affetti" DiDonato did some very uncharacteristic ducking and drop-outs. They were brief but enough to stop the musical momentum. That tight vibrato in her upper register was super-intrusive last night -- it's as if she simply couldn't rid her voice of tension. She does have a fantastic trill. But it wasn't A-grade DiDonato last night.

The production team (director Paul Curran, Sets/Costumes Kevin Knight) got booed at the curtain calls. Certainly it was not an exciting production -- and the few times the directors tried to spice it up fell terribly flat. For instance, in the second act, heads hung on sticks throughout the stage. War, you know. But the heads were little more than the rubber masks people buy at Halloween stores. So the overall look was "oh, heh" rather than "wow, war."

I think my main problem is that it was clear Curran was going for an old-fashioned, picturesque look for the production, but didn't even achieve that. The plain dresses, the drawn-on beards, the almost non-existent scenery, and people CARRYING trees onstage all screamed "tight budget" more than anything else.

Overall, last night was the kind of night no one wishes to have happen, ever: a semi-rare work is finally given a new production after many years' absence in New York, and you have on paper the best possible cast to sell this work. What should have been an exciting night turned into one where the singers limped along to the finish.

In fact, if you want great singing along with a great show, I actually recommend the current run of Carmen with Elina Garanca and Roberto Alagna (and later Jonas Kaufmann). Garanca's icy timbre and cool, aloof style are not the stereotypical Carmen, but she's so vocally alluring that one can understand why men go mad for her. And Alagna, a veteran at this point, still sings Don José with passion and style. The chemistry between the two remains as hot as ever.

And by the way, here's the Seinfeld "stopping short" clip: