NYCB had some bad timing during its winter season. The start of their season coincided with the sold-out Mariinsky gig at BAM. Since then, mother nature and injuries have plagued what is traditionally the NYCB's busiest dancing season. Ana Sophia Scheller and Rebecca Krohn are still out with injuries, and on Tuesday 2/3 Andrew Veyette joined the list of injured.

I caught one of their first week performances (a triple bill of Serenade, Agon, and Symphony in C) which was notable for several debuts: Erica Pereira's surprising quickness and security as the Russian girl in Serenade, and Ashley Bouder's glittering performance in the first movement and Brittany Pollack's whiz-bang turns in the 4th movement of Symphony in C.

In that performance Andrew Veyette did his usual superb job in the first pas de trois of Agon. Veyette is someone who performs so often in such a variety of roles that you almost take his presence for granted. On Tuesday he and Ashley Bouder were dancing in the effervescent Donizetti Variations. From the very opening you could just tell something was off. The conductor played this spritely score with unusual slowness. Ashley's saut de chats (the ones where she stretches her free leg out like an arrow) had their usual astonishing ballon but even she seemed unusually tentative. But Veyette was obviously dancing through pain in his solos. Finally after his second variation solo where he struggled through a series of double tours and winced from what looked like a hard landing, and walked offstage. That was it. He didn't come out for the coda or finale. Ashley Bouder and the corps danced it alone.

Veyette had a highly publicized debut the next night in the premiere of Justin Peck's Rodeo (set to Copeland's famous suite). Peck came out before the curtain to announce and Peck himself and Sean Suozzi would be subbing for an injured Veyette. Get well Andy.

How was Peck's new ballet? Well the audience loved it. I had wondered how he would handle using music that's already been used for an iconic ballet (Agnes de Mille's Rodeo). Peck's ballet has the same all-American high energy and spirits without seeming derivative. There's two teams of males that seem like they're on opposite sports teams. They are wearing different colored striped jerseys and athletic socks. This is a very male-dominated ballet -- there's only one female dancer onstage (Sara Mearns, dressed sort of like a cheerleader -- sweater, leotard, no tights). The two teams sprint across the stage as if they were charging the length of the field. At other times they jump, spin, and leap in a happy, all-American way.

The opening pas de trois was awkward -- Peck danced in Veyette's place and he towered over Gonzalo Garcia and Daniel Ulbricht and couldn't keep up with his own choreography. The second episode was maybe the best -- Daniel Applebaum, Craig Hall, Allen Pfeiffer, Andrew Scordato, and Taylor Stanley performed a rarity: an all-male quintet. Peck has a good eye for the talents of individual dancers. The dancers seemed like part of a brotherhood. Sara Mearns and Amar Ramasar had a surprisingly tender pas de deux before the barn-storming finale. Is this a great ballet? Time will tell. As for now it plays as a high-spirited piece of modern Americana. But Peck's new ballets have brought a level of excitement and buzz to NYCB premieres that's unprecedented.

The program started with Ratmansky's Pictures at an Exhibition. Somehow I had missed this in the fall. Ratmansky is so prolific that he has almost as many misses and hits. Anna Karenina is a crashing bore, Cinderella and Nutcracker terribly uneven, some of his creations for ABT have come and gone unmourned (The Tempest, Firebird).

At his best he's simply the best choreographer in the 21st century, period. Pictures at an Exhibition is Ratmansky at his most inspired. Mussorgsky's uncommonly playful piano suite brings about all the things that are most lovable about Ratmansky: his quirky sense of humor, his mixture of folk dance with classical ballet vocabulary, the sense of warmth and community he creates onstage. The staging, costumes and decor are based on Wassily Kandinsky's Color Study: Squares in Concentric Circles. 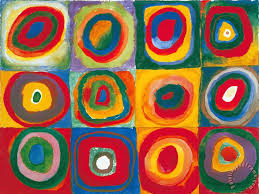 There are only 10 dancers onstage and they come and go almost casually. This is a ballet that's so rich I'll have to view it multiple times to catch all its complexity and nuances but standouts from last night:  an extraordinary "flying" duet between Sterling Hyltin (who took over the Wendy Whelan role) and Tyler Angle set to "The Old Castle," as well as a solo for Sara Mearns that showed off all her best qualities (recklessness, largeness of movement). As always, there is, as I said, that sense of community. All five girls (Hyltin, Mearns, Lauren Lovette, Gretchen Smith, Indiana Woodward) and five guys (T. Angle, Adrian Danchig-Waring, Gonzalo Garcia, Joseph Gordon, Amar Ramasar) pile on top of each other playfully, or they march together in solemnity. Sometimes the girls are carried gently with their legs sticking out like darts. Sterlimg Hyltin also puts her hands on the stage, as if to pay homage. So many wonderful things goes on, but when the curtain falls you feel as if you were given a peak into a lovely world that would continue in its merry adventures even after the music was over.

Other random thoughts about the company:

- Can Chaconne be saved? There's an old video of Suzanne Farrell and Peter Martins that showed how they brought their unique glamor to a ballet that's somewhat starchy and staid. With Teresa Reichlen and Adrian Danchig-Waring (both superb dancers) there was simply blankness.

- Speaking of Reichlen, she was part of maybe the finest performance of Serenade I have ever seen at the NYCB. Sterling Hyltin, Erica Pereira and Reichlen were amazing as the trio of girls, and Robert Fairchild made a very welcome return. Ask La Cour doesn't do much but he did make Reichlen's Dark Angel revolving arabesque ghostly.

- Sara Mearns is having a standout season. She's in the best physical shape she's ever been in and whether it's the sole girl in Rodeo or the doomed socialite in La Valse she commands the stage. She even manages to be effective in the second movement of Symphony in C despite not really having a traditional tutu physique.

- Zachary Catazaro and Ashley Laracey are not long for the soloist ranks. Both of them were absolutely outstanding in La Valse, which is maybe my least favorite Balanchine ballet ever made that's still commonly performed today.

- Lauren Lovette made a quick descent from "promising soloist" to "overcast and not quite ready." She's small, she's pretty, and she is the offstage partner of Chase Finlay. But her recent debuts (she took over for Tiler Peck in Pictures at an Exhibition and debuted in third movement of the Bizet) show a glumness, as if all she cared about were getting the steps right. Peter Martins seems to be throwing so much at her.