On the Town: Best in Show 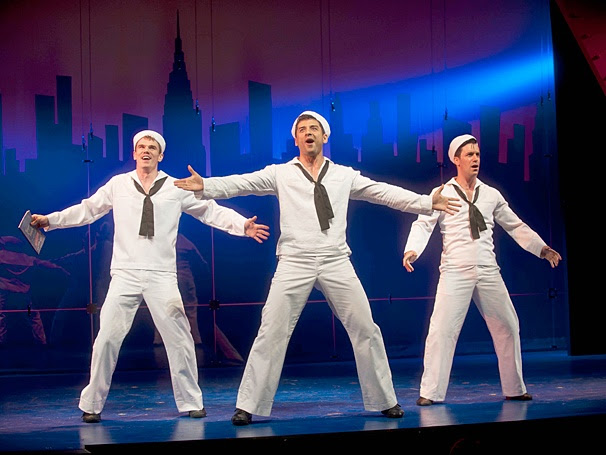 This is going to seem like a PSA rather than a review but: run, don't walk to see the wonderful revival of On the Town that's currently playing at the Lyric Theatre. The show is so funny, so sharp, so well-directed and well-acted, that there was literally not a moment of down-time.

On the Town was composed more than 70 years ago, and you'd think parts of the show would seem dated. Not so. Betty Comden and Adolph Green's superb book and lyrics are funny, sharp, but also capture the loneliness of the New York metropolis. Leonard Bernstein's score would later be eclipsed by West Side Story in fame but for On the Town he wrote a helluva score. There's something to please everyone: jaunty production numbers ("New York, New York"), pretty ballads ("Lonely Town"), and character-driven songs ("I Understand").

With that being said, the best lyrics and best music can't carry a show alone. Director John Rando and choreographer Josh Bergasse have created a show where the singing, dancing, and acting are so beautifully woven together that EVERY joke landed. EVERY subplot was delightful. EVERY dance made its full impact. Bergasse's choreography doesn't aim for the highbrow ballet-goes-Broadway concept of Christopher Wheeldon's American in Paris. But it is in every way superior choreography, because every dance number is appropriate to the scene, to the characters, and to the actors' dance skills. They did need a dance double for the act one ballet scenes but the substitution was unobtrusive. The choreography is also diverse. Whereas Wheeldon used the same steps over and over again ad nausem, Bergasse makes each production number unique. I particularly love the "boxing match" fantasy sequence between Ivy and Gabey. The original Jerome Robbins choreography has been lost, but Bergasse more than fills in that gap with dancing that was consistently engaging throughout the evening.

The show is incredibly well-cast. The Ivy (Megan Fairchild) was out for the night, so her understudy Skye Mattox went on instead. But Mattox was a fine dancer and a great actress who brought a charming wistfulness to this somewhat opaque role. The three sailors were amazing. They had such strong personalities that not for a moment did they seem interchangeable -- Gabey (Tony Yazbeck), Chip (Jay Armstrong Johnson), and Ozzie (Clyde Alves) were really the triple threat. They could sing, they could dance, they could act.

But the supporting cast was if anything even more remarkable. Ozzie's love interest Hildy (Alyssha Umphries) simply stole every scene she was in with her earthy, bawdy sense of humor. "Come Up to My Place" and "I Can Cook Too" brought down the house. Chip's love interest Claire (Elizabeth Stanley) was also hilarious as the horny museum worker. Perhaps the best was Michael Rupert as Pitkin, the hapless judge and Claire's fianceé. His big number "I Understand" was just amazing. Jackie Hoffman was also wonderful as Ivy's unscrupulous voice teacher. The comic timing of all the actors ensured that running gags didn't wear out their welcome. A good example was the two subway girls whose conversations begin with "So I said ..." "What did he say?" "So *I* said ..." Another example was the deadpan way Claire explained how she got together with the judge. "He said the two magic words: Suspended sentence."

There are so many reasons for the success of On the Town but I think it all boils down to one factor: trust in and respect for the original material. There was no attempt to update, no attempt to make the script "deeper." They didn't try to make the thin storyline beefier by adding new subplots. And you realize that by not updating or rethinking, the directors behind this show have managed to make the show seem hip and timely. New York might not have sailors on the prowl for hot girls, but everything else will strike a familiar chord with straphangers. It's the same New York -- the busy bees, the lonelyhearts, the grifters, the seedy nightclubs.

This show has no major stars, and it plays in a very large theater (Lyric Theatre) so there were some empty seats last night. But everyone: just go see it. Even if you hate musicals, you will love On the Town.

Update: I did see Megan Fairchild as Ivy Smith at a later date. She was incredible. Funny, adorable, a great dancer, and really lifted the Ivy Smith scenes. To get an idea of what she was like: