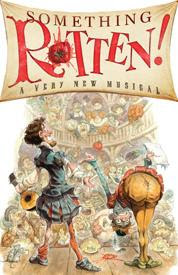 There's something to be said for a musical that doesn't attempt to be anything more than a rollicking good time. Something Rotten!, which just opened at St. James Theatre after a month of ecstatic word-of-mouth previews, makes its intentions clear from the very first number, a catchy but shamelessly brassy tune called "Welcome to the Renaissance." It's belted out by Michael James Scott and he's soon joined by a cartoonish collection of Renaissance sights and sounds. It's high-energy, lowbrow fun.


Karey Kirkpatrick, Wayne Kirkpatrick and John O'Farrell's book and music had most of the audience in delirious laughter for most of the afternoon. The premise is that in the Renaissance England theater scene, two brothers Nick and Nigel Bottom (a superb Brian D'Arcy James and John Cariani) are struggling to make ends meet as rock-star playwright William Shakespeare (an absolutely mesmerizing Christian Borle) has hogged all the fame, money, and funds. Nick is the pragmatic producer, Nigel the dreamy lyricist. Nick desperately uses the last of his money to pay off a fortune teller Nostradamus (Brad Oscar) to "steal" William Shakespeare's best idea and to predict the future of theater. He also enlists a wealthy Jewish financier Shylock (Gerry Vichi) for his Hail Mary bid for a commercial success. The musical he's decided to produce? "Omelette," about a Danish prince and, well, eggs.

I don't need to tell you that this ends up turning into a parody not just of Shakespeare, but of all musical comedy and show business tropes. Almost every line is an in-joke and you have to listen carefully or you'll miss all the references. This all climaxes in the huge Act One production number "A Musical," where just about every famous musical from the Great White Way is lampooned. The mockery of "Les Mis" is especially funny. "A Musical" is such a crowd-pleasing number that it actually stopped the show as the audience refused to stop applauding. It's followed by another show-stopper, "Will Power," in which William Shakespeare acts like an obnoxious, entitled rock star with screaming groupies.

The choreography by Casey Nicolaw is another high point for the show. Yay, tap is back! Tap dancing has become for whatever reason an endangered species in American musicals, so the clickety clack of tap shoes was really music to my ears. And the cast can really tap. No, they're not Bojangles or Fred Astaire, but they don't just do a few tap moves and then stop. They really sustain tap dancing throughout the show. It's wonderful.


The show is so funny, so good-humored, such a great all-around show, that it's churlish to criticize but there are some weaknesses. For one, this is a very male-dominated show. I won't explain all the male characters but there are a lot, and there's not a single weak link. The Bottom brothers, William Shakespeare, Shylock, Nostradamus, Lord Clapham (Peter Bartlett), and Brother Jeremiah (Brooks Ashmanskas) take over the stage and never let it go. Therefore the two female characters almost seem like distractions. Nick's long-suffering wife Bea (Heidi Blickenstaff) is charmingly down-to-earth but she's not given that much to do. Nigel's obligatory love interest is Portia, a poetry-loving Puritan. Kate Reinders (Portia) is the show's weak link -- her soprano is scratchy and undistinguished, and her acting skills not as strong as the others in the cast. This is a contrast to On the Town, which is also a "three dudes" musical but where the female cast is just as strong as the guys.

The other criticism is that director and choreographer Casey Nicolaw run out of gas somewhere in the second act. The show really climaxes at "A Musical" and "Will Power" and everything afterwards feels just a little bit of a let-down. The second act is like so many Broadway musicals in that it gets sidetracked with romantic subplots and superfluous songs, and the jokes that landed so wonderfully in the first act become less consistent. Thankfully the energy picks up again with "Make an Omelette," another one of those production numbers that just makes you deliriously happy. But the resolution is a tad disappointing.

Still, this is a great show, and I imagine it will have huge appeal not just with the hardcore theater folks but the general Broadway audience. You don't need to be an expert in musicals or Shakespeare to get the pop culture parody, and as I said, the cast sells this material like no other. Something Rotten! is as delicious as a well-made omelette.
Broadway musical theater performance review