The first week of Winter Season at NYCB is usually low-key. The company is tired from the Nutcracker marathon and also rehearsing for the inevitable world premiere of some new works. So the programming tends to be basic Balanchine. Stuff the audience knows and loves. Dancer-proof ballets.

And thus it was so this winter season. The first week was dominated by two excellent Balanchine triple bills: a "Balanchine Short Stories" program of La Sonnambula/Prodigal Son/Firebird and a more eclectic program of Allegro Brillante/Swan Lake/Four Temperaments. I saw one of the AB/SL/4T's performance and two "Short Stories." I don't need to tell you that Tiler Peck was amazing/super/stupendous in Allegro, and that her diagonal of consecutive triple pirouettes that was timed to end exactly with a CRASH in the piano chords gave me goosebumps. Andy Veyette was her fine, steadfast partner. Ashly Isaacs made an energetic debut as Sanguinic in the 4T's and Anthony Huxley's Melancholic was a highlight. He really has the contorted backbends and sudden shifts in poses down pat and what's more, make them look natural.


La Sonnambula, Prodigal Son, Firebird and Swan Lake were interesting as it required NYCB dancers to do something they're not accustomed to doing: acting. All four are short but intense story ballets and it's not okay to simply "do the steps, dear." I saw two separate casts and it's interesting how different dancers handled this demand to act. So, we now present the Academy Awards of Motion Dances, winter NYCB edition.

Best Actor in a Leading Role: Daniel Ulbricht in Prodigal Son. You could simply marvel in his technique -- huge flying jumps, series of triple/quadruple pirouettes that he decelerated as a show of control. But his portrayal was a success because he clearly made an arc in the Prodigal Son's development from an arrogant brat to a horndog lush to the humbled but mature man. His first and last interactions with his father (a wonderful Aaron Sanz) rang true. His chemistry with Teresa Reichlen's implacable Siren was hot. When the Prodigal Son crawled under the Siren's crotch there was a gasp in the theater. The Maria Kowroski/Joaquin de Luz by pairing by comparison was too PG-rated in energy to make much of an impact.

Best Actress in a Leading Role: Teresa Reichlen in Prodigal Son. When did Reichlen turn into such an actress? Her Siren was nasty, sexy, venomous. We all know about the Siren's famous snake coiling arm gesture, but she was the only Siren out of the three I've seen this year (Maria Kowroski and Veronika Part of ABT were the others) to use her cape as a boa constrictor. When she tightened that velvet around her neck and looked at the boys suddenly we were in an S&M club. When she kicked the beaten and robbed Prodigal Son it was delicious.

Best Actor in a Supporting Role: Zachary Catazaro's Prince in Firebird. Firebird is such a ballerina-dominated ballet. Who cares about the Prince and his insipid Princess? Well, Catazaro proved that it's possible to make something out of this role. Catazaro is the only Prince I can remember in recent memory who actually responds with surprise to the light at the back of the stage before the Firebird (AshleyBouder) makes her entrance. A tender glance here, a startled reaction there, and all of a sudden this becomes the Prince's story as well. In contrast Justin Peck merely let Teresa Reichlen to carry the entire ballet.

Best Actress in a Supporting Role: Sterling Hyltin as the Sleepwalker. I know this is sort of cheating but Sleepwalker is a SHORT role. Most of the ballet is dominated by the flirtation between the Poet and the Coquette and the various interactions at the masked ball. The Sleepwalker flits onstage in her candle, flits offstage, and only returns for the ballet's gruesome conclusion. Hyltin's feathery light bourreés which made her seem like she was gliding across the floor, her mass of unkempt tresses, and the completely blank, soulless stare she gave her Poet (Chase Finlay) whenever he tried to touch her made a ghostly frightening impression. By contrast, Tiler Peck's very well-danced Sleepwalker was very much of this world. Because she's Tiler Peck she was technically clean as a whistle. But the ethereal feeling was not there. This extended to her perfectly straightened, set and sprayed hair which just didn't give off a Crazy Woman in the Attic vibe.

Honorary mention in supporting act go to Aaron Sanz as the Father in Prodigal Son, Daniel Ulbricht who brought down the house as Harlequinade in La Sonnambula.

And just for kicks:

Best Production Design: Is this even a race? It's still Chagall's amazing Firebird backdrops. In fact, the trouble with this ballet is that the production can dwarf the actual dancing. Thankfully NYCB currently has Teresa Reichlen and Ashley Bouder, two strong Firebirds. They have different strengths -- Reichlen uses her long arms and back to create a soulful, majestic creature. Her Berceuse is a song of mourning. Bouder startles with the quickness of her jumps. But both are equally valid interpretations and the force of their personalities can battle Chagall. No mean feat.

Best Costumes - Alain Vaes' costumes for Swan Lake. Yes, the red-headed stepchild of the Balanchine canon, his not-very-inspired abridged Swan Lake. The ballet he openly said was a "bore" and changed countless times (new coda to adagio, added variations, dropped variations, reshuffling numbers, you name it). The ballet itself despite some lovely choreography for the corps remains a odd duck -- as if someone had decided to choreograph to a 30 minute orchestral suite from a 2+ hour ballet. But, my oh my, the costumes! Siegfried and his hunters have real hunting bags along with their bows and arrows, and the corps de ballet is outfitted in these black feathery concoctions that look gorgeous. The image of the black swans surrounding their Swan Queen (decked in the traditional white tutu) is stunning. And in the Swan Lake I saw with Mearns and Jared Angle, the costumes were just about the only thing great in that performance. 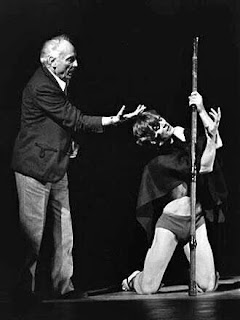 Best Original Score - I don't know. Getting to be a Sophie's choice here. Stravinsky's Firebird is one of the most famous ballet scores of all time but Prodigal Son's score matches the action so well that ... We'll defer to Mr. B on this one. No doubt he'd pick Firebird.

Best Picture - Prodigal Son. Made in 1929 but has lost none of its dramatic power. You'll laugh, you'll cry, you'll blush. And if you're not moved by this, then ...