- January 11, 2017
Romeo and Juliet are in the crypt. Romeo succumbs to the poison just as Juliet awakens from her self-induced slumber. Juliet stabs herself so she can die along with Romeo. Bodies slump over each other. Curtain. That's what happened last night at the end of the Met's new production of Gounod's Roméo et Juliette. It's basically what happens at the end of any presentation of Shakespeare's play.

Tragic. Heartrending, right? But as the lights dimmed I felt something I haven't felt while attending an opera in a long time: happiness. Yes, happiness.

Why? Because the performance last night was pretty much perfect. Not perfect in the sense that there were no flaws with the singers (there were), or that the production by Bart Sher was mind-blowing (it wasn't), but the energy from the star-crossed lovers (Vittorio Grigolo and Diana Damrau) was such that all flaws and reservations were swept aside in by the force of their performances. They were extraordinary.


Grigolo has finally found a role where he can channel all his sometimes hyper, erratic energy. His Roméo brimmed over with life. During the balcony scene he leaped onto one of the pillars in an attempt to touch Juliette's hand. Did he succeed? No, but he got cheers from the audience just for the try. Vocally he was also on his best behavior. There was his usual fondness for exaggerated dynamics, and his tendency towards veristic delivery clashed with the traditional French style of singing. But my, what singing! The role lies in a sweet spot in his voice -- there was no strain, no yelping. His voice was ringing and clarion all night. He capped the Act Four ensemble with a huge high C, and in his numerous duets with Juliette it was his ardent voice that soared over the orchestra and into your ears. Moreover, he really lived the role, made this somewhat sappy, cardboard character into someone real and lovable.

Damrau was not as flamboyant as Grigolo. You could tell she prepared for this role -- she can sometimes be brassy but she took care to present herself as shy and reserved. Her voice took some time to warm up. It now has a slightly husky, colorless quality and trills no longer come easily to her. "Je veux vivre" didn't have the ideally youthful quality and her voice has lost some flexibility. But as the opera progressed she and Grigolo's partnership became symbiotic -- they pushed each other to greater heights. Her Potion Aria was surprisingly powerful. By the bedroom duet her voice was soaring along with Grigolo's. She was a ying to Grigolo's yang. They complemented each other beautifully. Will they become the New New New (Onstage) Love Couple?

The supporting cast varied from mediocre (Mikhail Petrebko's wobbly, hollow Friar Laurent) to promising (Virginie Verrez as the pageboy) to excellent (Diego Silva as Tybalt). But really, this is a two-person show. Gianandrea Noseda led a vigorous but taut performance in the pit -- perhaps this was the reason for Grigolo's vocal discipline. There was no Marco-Armiliato-like indulging of every singers' vocal whim.

Bartlett Sher's production took no risks but also did no harm. The unit set (by his longtime collaborator Michael Yeargan) was a handsome stone court yard that was a believable Verona. Small onstage props indicated different scenes like Friar's church or the crypt. The costumes by Catherine Zuber were colorful and generally flattering to the singers. The only misfire was Sher's longtime love for huge fabrics as a scene changer -- he used it in Le Comte Ory, he used it in Fiddler on the Roof, and in Act Four the "bedroom" scene was yet again a large, stage-encompassing sheet that was laid out over the stage. It also billowed over the stage on occasion. I guess this gave Grigolo and Damrau more opportunity to roll around the floor. But in the crypt scene two stone slabs were brought out. So why no bed, in a production otherwise so literal? Oh well. Sher's production was pretty, it didn't intrude on the Grigolo Show, and it sort of matched the somewhat treacly vibe of this entire opera.

Some nights at the opera feel like "eat your spinach" exercises. Last night was a comfort food night. Beautiful music, beautiful voices, pretty sets, pretty costumes. It was like digging into a bowl of chili fries.

Here is Grigolo in one of his patented curtain calls. On anyone else I'd say "over the top." For him? Ange Adorable. 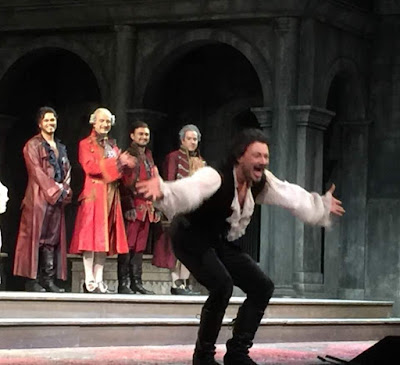