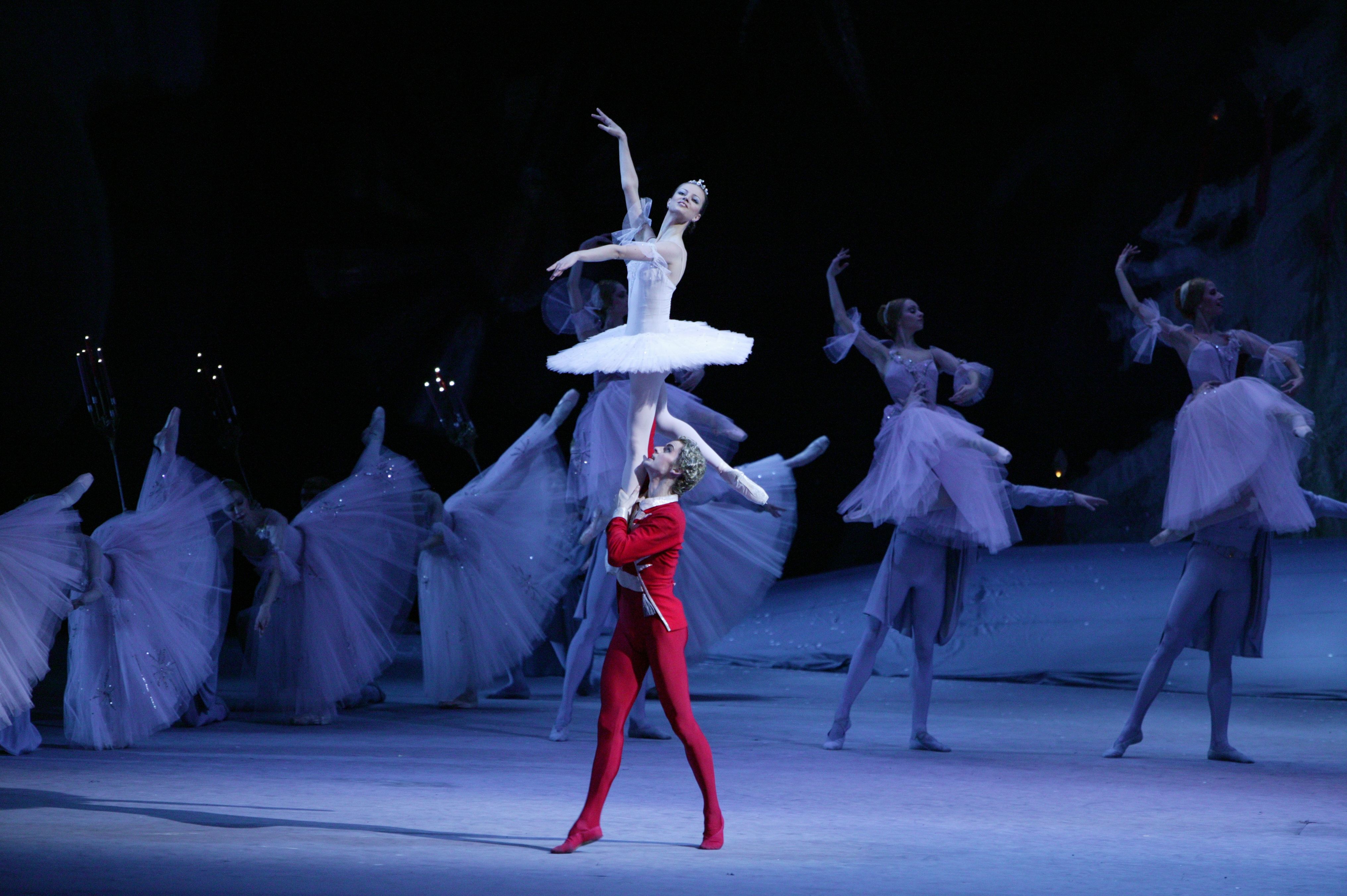 Three days later, I woke up at 10 in the morning to catch an 11:00 live HD transmission from the Bolshoi Theatre of Yuri Grigorovich's Nutcracker.


I had seen Grigorovich's Nutcracker before on video and disliked it immensely. Grigorovich followed the Soviet tradition that was started by Vassily Vainonen in 1934 of radically altering the original libretto of the Nutcracker. Masha (called Clara in other productions) is now played by an adult ballerina, and in Act Two she falls in love with her Nutcracker Prince and they get married before Masha wakes up and finds out it was all a dream. The character of the Sugar Plum Fairy and the idea of the Kingdom of Sweets is gone.

Vassily Vainonen's production, which is still danced by the Kirov/Mariinsky and many other ballet companies, is a sweetly romantic fantasy and has its charm. In 1966, Yuri Grigorovich, who graduated from the Vaganova Academy and danced in the Vainonen production when he was young, decided to mount a production for the Bolshoi Ballet that also decided to outdo Vainonen – if Vainonen had more dance and more love than the 1892 Ivanov, Grigorovich’s ballet had DANCE DANCE DANCE and LOVE LOVE LOVE. The basic structure of the storyline was identical to Vainonen, but Grigorovich was determined to put his own stamp on the work. Even the traditionally pantomimed parts (the battle between the soldiers and the mice, Clara throwing a shoe at the Mouse King) are instead transformed into a nonstop barrage of dancing, filled with the usual Bolshoi arsenals of big tricks (huge diagonal leaps across the stage, the “shoulder drape” lifts). The Mouse King isn’t killed until Act 2.  While the Vainonen/Nureyev versions had real children dancing in the party scene, Grigorovich’s “children’ were short-statured females.


In Act 2, Masha and the Prince during the grand pas de deux start by kneeling, as they would in an actual marriage ceremony. The various people that have danced in Act 2 surround  the couple, as if they were guests at the wedding. Their duet is a series of huge lifts designed to show off the muscular Bolshoi style, with a climax lift where the Prince lifts Masha aloft while Masha is standing vertical. I call it the “Grigorovich lift” because it’s become the Big Moment of Grigorovich’s ballet. After this lift BOTH the Prince and Masha are lifted by men carrying candelabras. It’s all very solemn. Not only are the Prince and Masha in love, all of a sudden we’re in the middle of a serious marriage ceremony. It is typical of Grigorovich’s Nutcracker, which is serious to the point of being an actual downer. The sets and costumes are mostly in dark drab colors. Perhaps the most ludicrous is the gray, Norman-Bates-like wigs the Snowflakes are wearing.

To give you an idea of Grigorovich's Nutcracker, here's a video clip:

But anyway, back to the performance. I disliked the production as much as I always have, but I must admit that the HD transmission lit up the stage a lot more than previous videos, which had always made the vast Bolshoi stage look pitch black at times. I also really liked the two leads, Artem Ovcharenko and Nina Kaptsova. I was stunned to find out that Kaptsova was born in 1978 and has been with the Bolshoi for over 12 years, as when I saw her last year in Le Corsaire she so convincingly played the youthful soubrette role of Gulnare. Ovcharenko was strong and muscular, but in a good way, like so many Bolshoi leading men of the past. He was able to the big Grigorovich lift in one hand, without a single break.

The corps de ballet also looked beautiful. They have been given more flattering, brighter costumes and wigs. They moved with grace, speed, and precision through Grigorovich's fussy choreography as if it were child's play. There was only one disaster -- Viktoria Osipova in the "Indian Dance" (otherwise known as the Arabian dance in most productions) was shaky from the start and ended up falling flat on her butt.