The three Nutcrackers I saw this year: Nutcracker #1

I'm a huge balletomane, and every year I try to see one Nutcracker, usually the New York City Ballet's, mainly because after having watched just about every other version I still find George Balanchine's version the funniest, the most charming, and the most full of Christmas magic. But as it happens this year I ended up seeing three Nutcrackers. That, along with a video Nutcracker marathon I did, means I probably am Nutcracker'ed out for the rest of the year. 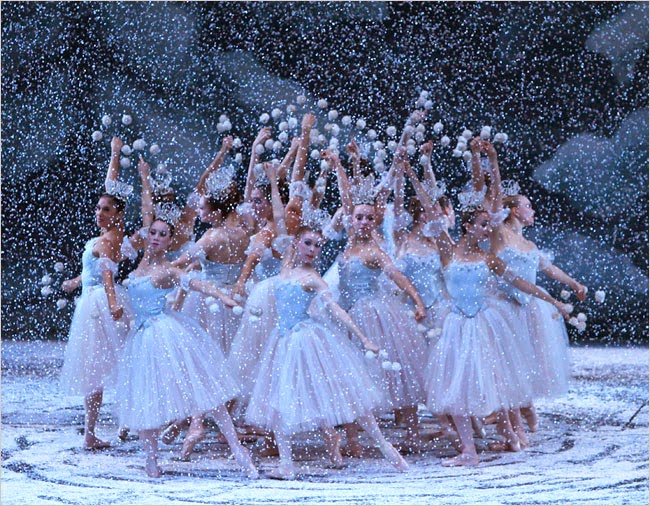 This is as I said by far my favorite version of the Nutcracker. Every time I go I notice new charming details about the production. This time around I noticed how Fritz in Act One gets stiffed a partner in the opening dance, and has to end up dancing with his mother. But just because I love Balanchine's Nutcracker doesn't mean I haven't sat through some very bad performances of this chestnut. I've seen Candy Canes who fell, a Sugar Plum Fairy who held onto her Cavalier's hands as if her life depended on it and slipped out of every supported pirouette, Snowflakes who dropped their snow wands, and, most surprisingly, sullen-faced Maries and Princes who looked like they wanted to be anywhere but there.

This year I got lucky. I thought the Snowflakes were not as sharp as I've seen them, but it might have had something to do with the breakneck speed the conductor chose. I got an excellent cast -- Sara Mearns as the Sugar Plum Fairy, Tiler Peck as the Dewdrop, and children who looked happy and enthusiastic. The little Prince performed his famous mime sequence with a beautiful clarity and panache. Sara Mearns is an oddity among NYCB ballerinas. She doesn't look like the typical NYCB ballerina -- long, stretched limbs, adept at fast, fleet footwork. Mearns has a very curvy body and a way of dancing not exactly on the beat of the music, but "through" it, the way many Russian ballerinas are fond of doing. It's a weird analogy but her dancing reminds me of Galina Ulanova, down to the short neck, the way she has of throwing her arms backwards at an angle to give the illusion of a longer neck, and the creamy, graceful style of dancing. I've heard the words 'gracious' and 'warm' used to describe the Sugar Plum Fairy so often that it's become a tired cliche, but Mearns' SPF was exactly that and more. She used her unique style to create an expansiveness of movement that made the SPF seem as if from another world. The Grand Pas de Deux held no terrors for her as she leaped onto the Cavalier's (Jonathan Stafford's) shoulder without any hesitation, and made it through the last section of promenade balances with nary a wobble. 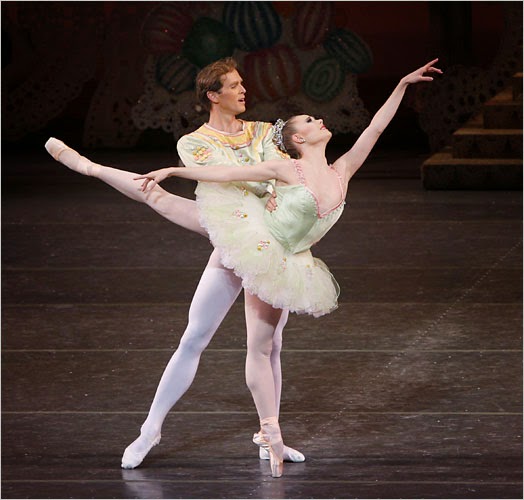 Tiler Peck as Dewdrop was the opposite of Mearns -- a small, lightning fast allegro dancer. She seemed to zip in and out of the Waltz of the Flowers like an absolute sprite. She along with Ashley Bouder are the NYCB's best Dewdrops at the moment. She only seemed to tire a bit in her finale solo. Peck has really progressed as a dancer -- when I saw her a few years ago, she was technically superb but a bit hard-boiled. She had a tendency to punch out her steps, replete with pounding her pointes to the floor. But just within the past year I saw her in Coppelia, also in the Patricia McBride part of Who Cares? Along with the ironclad technique there's now a softness to her movements, a maturity that gives her, as Alexandra Danilova would have said, "perfume."

I left the theater in a good mood, as I always do after Mr. B's Nut. My only sour feeling was hearing it repeatedly called the David H. Koch Theater. Ugh, as someone who knows about the man's repellent politics, I still can't wrap my head around the idea that he's getting theaters named after him.
at December 27, 2010