- February 19, 2011
Strauss's Der Rosenkavalier premiered in Dresden on January 26, 1911. That makes it 100 years old this year, and it's been 100 years of unmitigated success on recording, on video, and of course, in theaters around the world. It's still one of Strauss's most popular operas. The opera is much-praised for its witty libretto by Hugo von Hofmannsthahl, it beautiful vocal writing for the female voice, and some justly famous set-pieces -- the Marscallin's monologue on aging, the Presentation of the Rose, the waltz melody, and of course the trio near the end of the opera. I know opera fans who cry every time they hear "Marie Therese."

I find however that my appreciation of Der Rosenkavalier has lessened over the years, and the opera feels falser, more artificial, less moving, than when I was a newbie and swooned at the Trio and Presentation of the Rose. And some things about the opera I cannot tolerate at all anymore -- namely, the long scenes of Ochs being a boor in various scenes -- all three acts feature him being a total pig, and the fact that I think audiences are supposed to find it funny lessens my appreciation of the opera, because I never find any of the Ochs scenes funny. The middle part of Act One is bogged down with "scenes from the Marschallin's life" that I no longer find interesting either. I think I've fallen out of love with Der Rosenkavalier, even though I find parts of it still very beautiful and charming. What's happened to me? 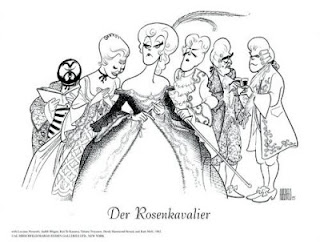 Maybe one problem is that while I've heard plenty of lovely recordings of Der Rosenkavalier, my experiences in the house with this opera have been very disappointing. I've heard some good performances in Der Rosenkavalier (Susan Graham as Oktavian, for instance), but never a good overall performance. The first time I heard the opera in 2005 the Marscallin was a dry-voiced, dull Angela Denoke. The second time I heard the trio of Renee Fleming, Miah Persson, and Susan Graham, with Kristinn Sigmundsson as Baron Ochs. It was a terminally dull evening. The Ochs scenes seemed to go on even longer than I remembered, and by the time the Trio rolled around I no longer cared about Quinquin, the Marschallin, or Sophie.

A great live performance can make you hear accents and details that eluded you in a recording -- I don't think I ever "got" Salome until I saw Karita Mattila stand before a curtain, drained and pale, after an absolutely demented performance in 2004. I don't think I ever understood Giselle until Diana Vishneva made me realize that Giselle was not just a pretty Romantic ballet, but with the right dancers could be hair-raising theater. I'll never forget Vishneva's stern wraith of Act Two, her eyes darkened with black eyeshadow, her skirts flying every direction, as she stared down Myrtha and really sent a chill down my spine. Maybe one day I'll experience a great performance of Der Rosenkavalier and it will help me love the opera again.

But although I've never had a great live Rosenkavalier, I've heard plenty of greatness on recordings and videos. Der Rosenkavalier is the perfect opera for recording or video. First of all, the trio of female characters tend to be cast with the kind of voices who are extremely phonogenic -- bright, silvery, lyric. For Ochs, hearty basses (maybe the most phonogenic fach of all). Large voices, thick, trumpety voices, voices with heavy vibratos or unusual timbres, often translate poorly to the recording medium. In contrast, performance history has favored very pretty, straight-toned lyric sopranos and mezzos for Rosenkavalier. There are exceptions of course. Elisbaeth Schwarzkopf was often chided for not having a very beautiful voice, and she was a famous Marschallin, Lotte Lehmann had a wonderfully throbbing, warm voice that I suspect sounded even warmer and more enveloping in the theater.

Another aspect of Der Rosnenkavalier casting tradition tends to make it the perfect video opera -- "lookism" in casting is ingrained for Rosenkavalier. Not a surprise that many of the most famous exponents of this opera (especially Marschallin and Sophie) were also just as noted for their physical beauty -- Eleanor Steber, Jarmila Novotna, Elisabeth Schwarzkopf, Lisa della Casa, Kiri te Kanawa, Hilde Gueden, Anneliese Rothenberger, Lucia Popp, Barbara Bonney, Sena Jurinac, and today, Elina Garanca, Miah Persson, Anne Schwanewilms were/are all beautiful singers with beautiful faces and handsome figures. I recently watched Kultur's rerelease of the 1961 film with Elisabeth Schwarzkopf, Sena Jurinac, and Anneliese Rothenberger and was amazed at how beautiful the women looked. Not just "opera beautiful," but flat out beautiful. Close-ups of many opera singers are fatal -- people see the sweat, the strain, the plain faces. But Der Rosenkavalier usually has such attractive singers, and calls for such "subtle" acting, that the camera loves this opera.

Here's a march through the beauty contest over the years:


The music and libretto of Der Rosenkavalier also lend themselves well to recording. Often, operas with larger-than-life emotions and music seem heavy-handed under the scrutiny of the microphone or video camera. There is practically no way, for instance, for the video camera to capture the larger-than-life spectacle of Aida. But in Der Rosenkavalier, a premium is placed on subtlety, wit, charm, graciousness. The opera despite the famous moments has an intimate, conversational feel. There are lines in the libretto that resonate with a kind of Chekhovian truth, as when the Marschallin remarks, "Es sind die mehreren Dinge auf der Welt, so dass sie ein's nicht glauben tät', wenn man sie möcht' erzählen hör'n. Alleinig wer's erlebt, der glaubt daran und weiss nicht wie." Which translates roughly to, "Most things in life we don't believe until it happens to us, and then we believe it." On video and recording, one can also skip through the parts that are often tiresome in a theater -- I often skip through much of Baron Ochs' music, and most of Act Three up until the Marschallin's entrance in the tavern. Der Rosenkavalier is definitely an opera that many even so-called "diehards" fast-forward.

I have a lot of recordings I appreciate -- the Erich Kleiber recording, and on video, I have five of them and I like them all. I have to single out Eleanor Steber, Elisabeth Schwarzkopf, Hilde Gueden, Maria Reining, Lotte Lehmann, Elisabeth Schumann, Lucia Popp, Sena Jurinac, Anneliese Rothenberger, Lisa della Casa, and in recent years, Susan Graham for being particularly outstanding exponents of this opera. Elisabeth Schwarzkopf's film is a marvel -- I often cringe at her husky, throaty voice, but her understanding of this role is miraculous. The way she makes Marie Therese a slightly cold and bitter woman, increased my understanding of this opera. Marschallin is often played for sentimentality, and that's something Schwarzkopf eschews stubbornly. When she drops her mirror at the end of Act One she really depicts a woman contemplating not only age, but loneliness. Der Rosenkavalier tends to bring out the best in its female singers. The list of memorable singers in Der Rosenkavalier is long and illustrious.

Yet none of this is enough to make me love the opera as a whole. I actually do not dislike the character of Ochs -- I feel as if his famous waltz tune gives him a kind of rascally charm and joie de vivre that I wish more Ochs would portray. I also find his repeated refrain of the waltz tune oddly poignant -- it's a deliberately sentimental tune, and it suggests depths to the character that Hofmannsthal himself perhaps was unwilling to explore. The issue with Ochs is that the stage business with him goes on for too long. He really is a character who wears out his welcome. Another issue is that when I think about the opera , it's really just a drawing room comedy. The fact that even with the traditional stage cuts it goes on for over 3 hours without intermissions I feel is overindulgence on the part of both Strauss and von Hofmannsthal -- both of them patting themselves on the back, one with "oh look how heavenly and charming is my music," and the other with "oh look how witty and wonderful is my libretto."

None of these reservations detracts from the famously beautiful parts of Der Rosenkavalier, but I also feel as if perhaps the "good parts" are so sublime that many opera lovers have a blind spot to this opera. They cry loudly during the trio, they swoon at how wonderful and gracious the Marschallin is, and so on and so forth. But ... let's face it? When was the last time someone really enjoyed the long stretches of Act Three? When was the last time Act Two didn't feel like it went on for way too long? And isn't the "moral" of the story just a little too precious and pat?

Still, there's no denying the beauty of certain moments of Der Rosenkavalier. So, a happy 100, and maybe sometime in the next 100 years I'll be able to recapture my initial love of the opera.

These are justly the most famous parts of the opera. Enjoy!

Presentation of the Rose (with Lucia Popp and Brigitte Fassbaender):

Presentation of the Rose (Rothenberger and Jurinac):