It Happened One Night

- February 27, 2011
TCM played this evergreen romantic comedy tonight. In 1934 this movie swept the Academy Awards for Best Picture, Actor, Actress, Director, and Screenplay. Today the thought of a rom-com even getting nominated for anything but the razzie makes people laugh. What has happened to the rom-com, that it no longer has the freshness, wit, romance, and charm that old Hollywood rom-coms had in spades? 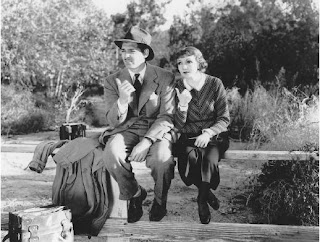 It Happened One Night has a fairly predictable rom-com set-up. Ellie Andrews (Claudette Colbert) is a silly, spoiled heiress who impulsively eloped with a playboy, King Wesley. Her father (Walter Connelly) doesn't approve, so Ellie runs away to New York. Of course as a spoiled heiress she has no idea how to actually get to New York, and ends up on a bus with the recently-fired reporter Peter Warne (Clark Gable). Of course Ellie and Peter bicker at first but fall in love. Besides being a great rom-com, the movie is also a nice snapshot of Depression-era America, where people scrimped and saved and drove broken-down Model T's and casual thievery was rampant, just to make ends meet. At one point in the movie a boy's mother faints on the bus because they had spent the last of their money on bus tickets. The inherent goodness of Peter and Ellie is demonstrated as they give the last of their money away to the boy and his mother. It might be "Capra-corn" but so many years later it still works.

The movie is filled with now-classic moments, like the sexual-tension filled overnight stay in an autocamp, in which Peter insists on putting up a blanket between their beds. They had registered as man and wife in the autocamp. Of course the blanket only increases the sexual tension, as they flirt with each other between the Wall of Jericho. Peter starts to undress in front of Ellie, and gets down to his bare chest before Ellie retreats to the other side of the wall. He sneers, "Don't worry, the walls of Jericho will protect you from the Big Bad Wolf." I think this scene illustrates why rom-coms had more power in their day -- movies had a stricter code, and so to work around that directors created scenes of delightful banter and sexual tension. Dialogue like this remains both understated and sexy, after all these years:


Ellie: By the way, what's your name?
Peter: What's that?
Ellie: Who are you?
Peter: Who me? (smiling) I'm the whippoorwill that cries in the night. I'm the soft morning breeze that caresses your lovely face.
Ellie: You've got a name, haven't you?
Peter: Yeah, I got a name. Peter Warne.
Ellie: Peter Warne. I don't like it.
Peter: Don't let it bother you. You're giving it back to me in the morning.
Ellie: Pleased to meet you, Mr. Warne.
Peter: The pleasure is all mine, Mrs. Warne. 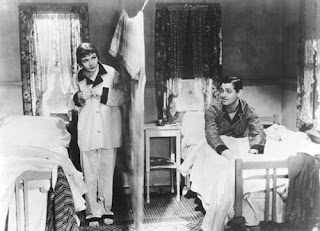 Another famous and charming scene is the hitchhiking scene, in which Peter Warne famously brags about his hitchhiking techniques, only for one car after another to go by while he uses his thumb to flag down cars. Ellie stops a car immediately with a lift of her skirt to show off her legs. Watch this scene on youtube and I dare you not to smile:


It Happened One Night was made in three weeks, and Claudette Colbert famously declared it was the worst movie she ever made. That is, before it became the smash hit of the year. But the movie benefits from a feeling of spontaneity, director Frank Capra shot in his famously fast style, and many of the scenes feel ad-libbed. The film also benefits from Columbia Picture's famous stock of character actors, who add quite a bit of humor to the central love story. There's Roscoe Carns as the eccentric fellow bus-passenger Shapeley ("Shapeley's the name and that's the way I like 'em"), Alan Hale who picks up Ellie and Peter as they hitchhike and immediately starts belting, opera-style, "Hitchhiking, on a lonley highway," and others. They are the kind of character actors that actually give the movie character, instead of today's "character actors," who tend to simply be creepy.

Claudette Colbert has none of the simpery charm of Kate Hudson, Meg Ryan, or Sondra Bullock. Nor is she massively irritating like Katherine Heigl. She's not even particularly glam, with her vintage bob, short bangs, and somewhat round, plain face. Her charm is conveyed through her character -- tough, plain-spoken, with a husky voice and sarcastic sense of humor. Her road trip frees her from the life of a bored socialite. Clark Gable would maybe never again find such a perfect role except for maybe Rhett Butler -- the swagger, the sense of humor, the tough/tender personality, it's all there in one perfect package as Peter Warne. The chemistry between Colbert and Gable is something that probably drove the film's success -- during the entire movie, they never kiss, but the sexual tension between them practically jumps off the screen. The relationship is for the most part prickly, but Capra also captures well the small moments which often change a relationship permanently. In one scene, Peter puts a blanket over Ellie, and the moment turns unexpectedly tender. I like this scene because it reminds me of my parents -- they're Asian, and not openly affectionate as a rule. But even today, whenever they put a blanket over me, they often do so with so much love and care that I'll still pretend to be asleep so I can feel them adjusting and readjusting the blanket so it fits perfectly.

Today's rom-coms in general are panned by the critics, and receive little attention either at the box office or by the "film snobs." There are some exceptions (500 Days of Summer), but the formula has grown stale, and when going for romance, directors tend to focus on romantic dramas or literary adaptations. It Happened One Night is a delight because all these years later, it's still funny, sharp, and has a great ring of truth.
film