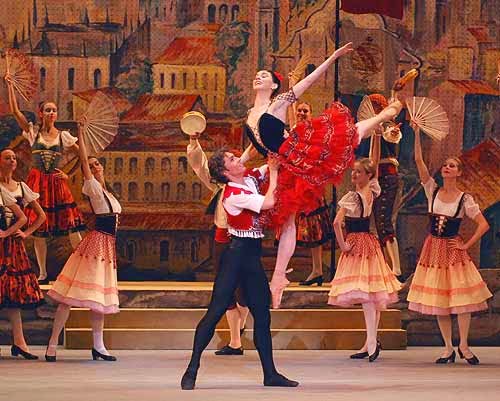 If ever there was one ballet associated with one company, it might be the Bolshoi Ballet and Don Quixote. This colorful romp through 16th century Spain has almost nothing to do with Cervantes' novel, which is a profound philosophical dialogue between two mythic characters, Don Quixote and Sancho. Despite the famous events, the novel is not driven by narrative, but by ideas. Perhaps that's why there have been so few great adaptations of Cervantes' work. Petipa/Gorsky's ballet is based on a small episode in the Cervantes novel, but really it's just an excuse for a non-stop dance spectacular. Don Quixote and Sancho are walk-on characters who have little to no relation to the plot. Ludwig Minkus's score is bright and bouncy, maybe the best score he ever composed. The ballet was originally choreographed by Marius Petipa, but the version we know today is really the revised choreography of Alexander Gorsky. Gorsky erased the formal classicism that Petipa favored, and made Don Quixote heavily focused on character dancing. As a result, the ballet feels like folk dancing, even if it's not. Today's live in HD transmission from the Bolshoi made the best possible argument for this ballet.

The two previous Bolshoi HD transmissions had played to almost empty theaters, but today's theater was packed, and I suspect it's because of the high-wattage star casting of the lead roles. Natalia Osipova and Ivan Vasiliev are in demand in ballet companies across the world -- they've become a famous partnership independent of their home company. Their Kitri and Basilio videos have been quietly passed around among ballet fans, and uploaded onto youtube. Last year, Natalia Osipova guested at the ABT as Kitri, and my thoughts on her performance can be found here. Still, a live video transmission is still an exciting Event, which probably accounts for the packed theater on a cold and rainy Sunday morning.

It's interesting to see Osipova's Kitri with her home company. At the ABT, her technique and style were so different from that of the rest of the company that it became the ultimate Star Performance. One went to see her, and only her. But with the Bolshoi, one can see that Osipova isn't radically different from her sister ballerinas, she's just a more flamboyant, extreme version. The strength in terre a terre moves (turns, balances), the power in jumps, the muscular legs and thighs, the bravura style, are present in the Bolshoi dancers, from the last line of the corps de ballet to the principals. Ivan Vasiliev was not even trained at the Bolshoi Academy, but his stocky frame and explosive style make him a natural Bolshoi dancer. 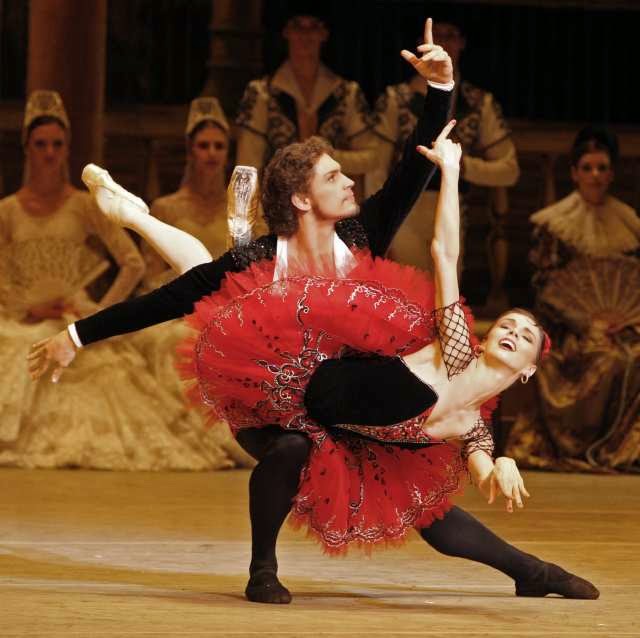 There's not much more to add about Osipova and Vasiliev; the roles of Kitri and Basilio fit them like a glove. They are physically and emotionally well-matched. Both dancers seem to have endless stamina; at the end of the ballet one feels as if they could do it all over again. Both of them have extreme elevation and ballon -- the ability to remain suspended in the air indefinitely. When they do a tour jete, both of them seem to devour the entire stage. Both use their legs as knives -- sharp, they cut through space like cleavers. Osipova's feet lack the dainty arched instep of many ballerinas -- they instead look like the end of the blade. And both are great at "selling" the ballet. In Act One, Basilio lifts Kitri with one hand and holds the position, drawing applause. But then Vasiliev decided to rise to demipointe, and lift his right leg to arabesque, all the while holding Osipova in the one-handed overhead lift. It was a move calculated to bring down the house, and it did. Osipova's daring never ceases to amaze -- in the tavern scene, when she hurls herself across the air into Vasiliev's arms, she seems to have no fear that he might not catch her. She of course does the requisite Plisetskaya kicks to the back of the head, and all the other "Bolshoi-isms", but she also can be deliciously light in her jumps and sparkling in her bourrees, releves, and passes.


The real joy for me in this ballet was to see the Bolshoi's strength in character dancing. Character dancing is something that often looks rote and pale when, say, the ABT or NYCB does it. This winter, I had the displeasure of watching the lovely Janie Taylor reduced to wiggling her hips helplessly in Martins' "Russian Dance" in his Swan Lake. But to see the way the Bolshoi women stamp their feet in character shoes, their deep dives into floor-sweeping back-bends, the vigor with which clap their tambourines or wave their fans, is to see a whole different world. Anna Leonova as the street dancer, Kristina Karasayova as Mercedes, the corps de ballet in Act One, all absolutely tore up the stage. Their non-stop movement was exhilarating. 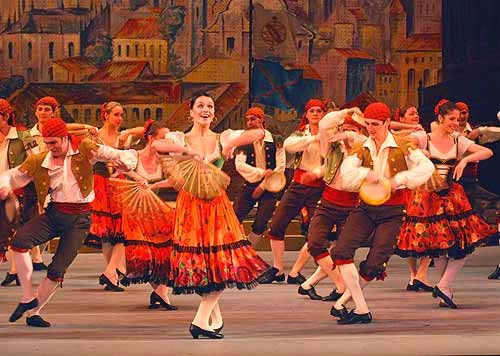 The "Dream Sequence" of Don Quixote always feels like the weakest part of the ballet. It's like a vestige of Petipa formalism in a ballet that is determinedly anti-Petipa. And it's here in the Dream Sequence that the Bolshoi showed their (relative) weakness. The absolute strength and command of their lower bodies is always a marvel, but their epaulement is still not as lovely as, say, the Mariinsky's. What's more, they look bored dancing the scene. The Bolshoi vigor is noticeably absent, although the corps de ballet look pretty and refined. Natalia Osipova toned down her sharp attack, and floated across the stage in hops on pointe. Her extraordinary jumping ability was again present in the grande jete diagonal -- instead of being sharp and space-devouring, her jumps in the Dream Sequence were light and airy. They covered just as much space, but they were toned down in force. The Queen of the Dryads was Ekaterina Shipulina, and she was oddly bland. Her variation substituted arabesques for the usual developpes, and some pique turns for the usual Italian fouettes. I don't know, but I have a feeling that the Queen of the Dryads is not a coveted role in the Bolshoi rep, and is thus indifferently cast with competent but unremarkable soloists. Cupid was Anastaia Stashkevich, and her attempt to simper and be fairy-like struck me as false and forced. Here's a comparison of Shipulina's variation with the one performed by the Mariinsky:


The Act Three Wedding Scene again showed the Bolshoi at their best. Natalia Osipova got noticed when she did the first "jumping" variation in the Grand Pas, and the ability of the Bolshoi school to churn out ballerinas who can sail across the stage in grande jetes is seemingly endless. Today, Anna Tikhomoriva did the honors. In her bright yellow dress, she flew across the stage, as if to say, "Watch out, Kitri is next." There was a dance of the little Cupids, done by the Bolshoi Ballet Academy students. Osipova and Vasiliev in the grand pas stretched the limits of classical ballet technique without vulgarizing it. Yes they knew how to milk the applause, but when they are that technically astounding, they have a right to milk away, in my opinion. Osipova likes to hold a balance in attitude or passe, and if one were to count the actual seconds, it would not be that long. It just seems longer because of the total solidity and stillness of her balance. In the coda, Osipova provided her by-now signature whirlwind double, triple, and quadruple fouettes, and Vasiliev his double tours 'en air and barrel turns. The closeups captured a rare glitch on the part of Osipova -- at the end of her fouettes, instead of landing triumphantly in a wide fourth position, she stumbled, and the smile on her face disappeared. She looked slighly disappointed for the rest of the ballet, including the curtain calls, and it was a poignant reminder of the relentless perfectionism of most dancers.


Overall it was a happy morning/afternoon at the ballet. The only sour spot was that there were several technical glitches in the transmission, and sound dropouts. Thank god the glitches did not last for long. Cervantes' Spain was a sinister, violent place, where the only true goodness was embodied in the Don and Sancho. Great book, but it would make a terrible ballet. The Bolshoi's Spain would make for a dull book, but it's a terrific ballet.
ballet Bolshoi Ballet Don Quixote live in HD Natalia Osipova performance review Petipa