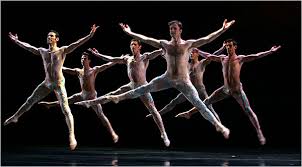 This afternoon, thanks to a friend, I was able to see the Paul Taylor Dance Company for the second time this week, in a very different triple bill -- Arden Court, Three Dubious Memories, and Cloven Kingdom. This is my third time seeing Taylor's company, and every time I think I "get" him as a choreographer, he does something that surprises me, and makes me rethink what he's about, what drives him. What's his philosophy on life, or dance? I left the City Center pondering these questions, that probably can't be answered.

The afternoon bill opened with Arden Court, and it was one of the most charming dances I have ever seen, period. The music is by baroque composer William Boyce, and then men are bare-chested (the audience sighed at how handsome the Taylor dancers are, in that effortless, all-American, athletic way), the women dressed in pretty white dresses with colorful multi-colored dots. As "pants," the men are wearing these white tights with the same multi-colored dots. Again, I could be wrong, but my first impression was that the dancers could be fairies, or elves, or little children playing in a garden (there is a large rose backdrop). The whole dance has a wonderful playfulness that is uninterrupted by any darkness. The men and women run and crawl in circles, skip and hop across the stage, and at other times they pose in stillness, as if they were savoring the moment. At one point, three of the men do supported cartwheels. It's an expression of childlike joy, and also proof that partnership in dance is not just between a man and a woman. One of the most striking scenes is the lineup of six men -- one of the men all of a sudden decides to do a handstand. At other times the dancers cross the stage in exuberant diagonal leaps. It literally made me sigh with happiness.

Then it was intermission, and when the curtain came back up it was Paul Taylor's other premiere work, Three Dubious Memories. The dance actually has a strong story -- it's a clear homage to the great Kurosawa film Rashomon, in which one story is told from different perspectives. There is a "chorusmaster" and a sort of Greek chorus, who are dressed in gray and throughout the dance are stern and unsympathetic to the main drama between the Man in Blue, Man in Green, and Woman in Red. The first section is titled "As Remembered by the Man in Blue" and his memory is of him violently interrupting a romantic idyll between the Woman in Red and Man in Green. The Man in Blue savagely separates the couple, then forces himself upon the Woman in Red. The second section, "As Remembered by the Man in Green," maybe too predictably has the opposite perspective -- the Man in Green catches Woman in Red and the Man in Blue in a forbidden tryst, and is furious. But the third section, "As Remembered by the Woman in Red," turns the whole storyline upside down. The Woman this time is the interloper, as she walks in on a homoerotic, ambiguous situation between the two men. The final section has the choristers return, and the two Men and Woman sit grimly on three of the choristers, who are now doubling as chairs. The love triangle is now permanently separated. The two Men and the Woman do not even look at each other or touch in the final section. It's as if the Greek Chorus has pronounced their judgment, and that is that neither Man gets the Woman. I remembered the playful, sexy interactions between men and women in Arden Court, and Three Dubious Memories was such a contrast.

The program ended with Cloven Kingdom, which was one of the weirdest, most surreal theater I've ever experienced. My first reaction was "Paul Taylor on acid." After all, could "Cloven" be a drug reference? Who knows. The program notes has the cryptic quote "Man is a social animal," and Taylor has emphasized the animal part of that saying. The "Kingdom" part of the dance's title also suggest an animal world, and what a strange world Taylor has imagined. The music is a mix of baroque (Arcangelo Corelli) and almost African-sounding percussion beats. Eventually the percussion drowns out the baroque melodies almost completely. The women are in beautiful, floor-length evening gowns, the men in handsome black evening suits. But there was nothing beautiful or elegant about their movements. I thought at times Taylor was spoofing classical ballet (the four men interlock arms and do a series of pas de chats, just like the cygnets in Swan Lake), Martha Graham (the huge sweep of the leg in developpe in those big dresses), even Alvin Ailey (the percussion music mix and the exaggerated arm pumping). But the dance is like nothing I've ever seen. Movements are violent and hard, the men crawl and somersault across the floor, evening suits all twisted, like animals in heat. The women eventually don weird-looking shiny geometric head-dresses, and it makes them look mythic, but they too leap and pound the stage relentlessly, as if they were driven by some force that can't even be articulated by dance. In the few moments the men and women are onstage together, sometimes they waltz formally, and then the dance will become almost a messy brawl. It really was a strange work that I probably need to several more times before I can begin to absorb all that Taylor is trying to convey.

When the program was over I thought about how odd the ordering of the dances was. Arden Court is a big crowd-pleaser kind of dance, and I thought that it'd be a natural to finish the program (the way Revelations or Symphony in C tend to be program finishers). Instead, Taylor created a magical, charming world in Arden Court and then proceeded to demolish that charm and magic in two works that really seemed to touch upon the dark side. When the octogenarian came out for his curtain calls, I thought about how next year, when his troupe comes to City Center again, I will probably watch a dance of his and think that I understand his work. And then I will watch another dance and he will put me back at square one, a complete novice with no right to do anything but observe and wonder.
modern dance Paul Taylor Dance Company performance review