Elixir of Love at the NYCO 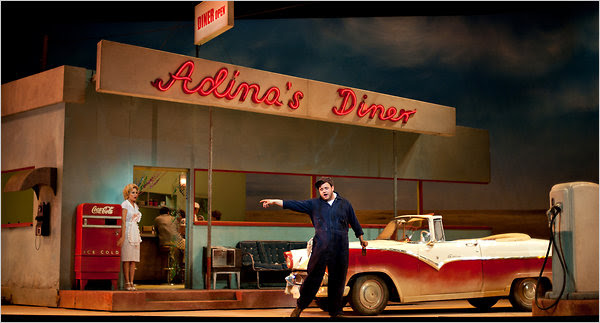 This afternoon I went to the New York City Opera's Elixir of Love. It's usually called Elisir d'Amore, and set in some kind of rustic Italian fairy-tale-land, but Jonathan Miller's production has set Donizetti's everygreen opera in the American South, 1950's era. Miller took a page from Peter Sellars' famous production of Cosi fan tutte that was set in "Despina's Diner" and decided to make the unit set "Adina's Diner." At various points in the opera, the characters dance along, jukebox style, to Donizetti's catchy tunes. It was overall a charming performance, with a more relaxed vibe than a typical performance at the Metropolitan Opera. The small-scale production and cast of mostly young, unknown performers gave Donizetti's opera a freshness and energy that propelled the whole afternoon along.

Elixir is known to be a tenor's opera, a favorite vehicle for just about every great lyric tenor in the past. The reasons are easy to understand -- the character of Nemorino doesn't require any leading-man glamor, just a warm, glorious voice to sing well-known arias like "Quanta e bella" and "Una furtiva lagrima." The beauty of the opera, however, is that it doesn't need Enrico Caruso or Luciano Pavarotti to be a success. The role of Nemorino lies so beautifully within most lyric tenors' ranges, that the success practically writes itself. The Nemorino in this revival, David Lomeli, has a charming, warm voice with a quick vibrato. His voice has a nice bloom in the upper register, and projected well even in the notoriously acoustically unfriendly Koch Theater. His portrayal has a genuine sweetness and naivete. Lomeli won Placido Domingo's Operalia competition in 2006. He's not a star yet, but he's definitely a name to pencil in for the future.

The Adina was Ukrainian soprano Stefania Dovhan, who was dressed in a Marilyn-Monroe-like wig and projected a decent amount of glamor. You can read a good article about this young soprano here. The voice can sound a bit sharp and vinegary, which is fine for a role like Adina, and even though the cast biography lists the typical lyric soprano roles for Dovhan (Pamina, Gilda, Cleopatra, Violetta), her voice has enough cut and volume that I can imagine bigger roles for her in the future.

As Belcore, Jose Adan Perez had a pleasingly full, ringing baritone voice that had little of the dryness and leanness that seems to be a plague among today's baritones. Belcore in this production is more endearing and less obnoxious than usual. A conceited soldier who knows he looks great in a uniform. The only disappointment was Dulcamara. Marco Nistico's baritone is afflicted with that dry, hollow sound, and he also seemed less engaged in the production than the other three principals.

I thought the performance was "New York City Opera" charming -- a bit small-scale, and even the production had simple sets, low-key blocking and stage directions, and serviceable but unremarkable costumes. The "update" did not significantly change the story. The singers are perhaps not quite ready for Prime Time in Major International Houses, but are nevertheless engaging and promising. Overall, a good afternoon.
New York City Opera opera performance review