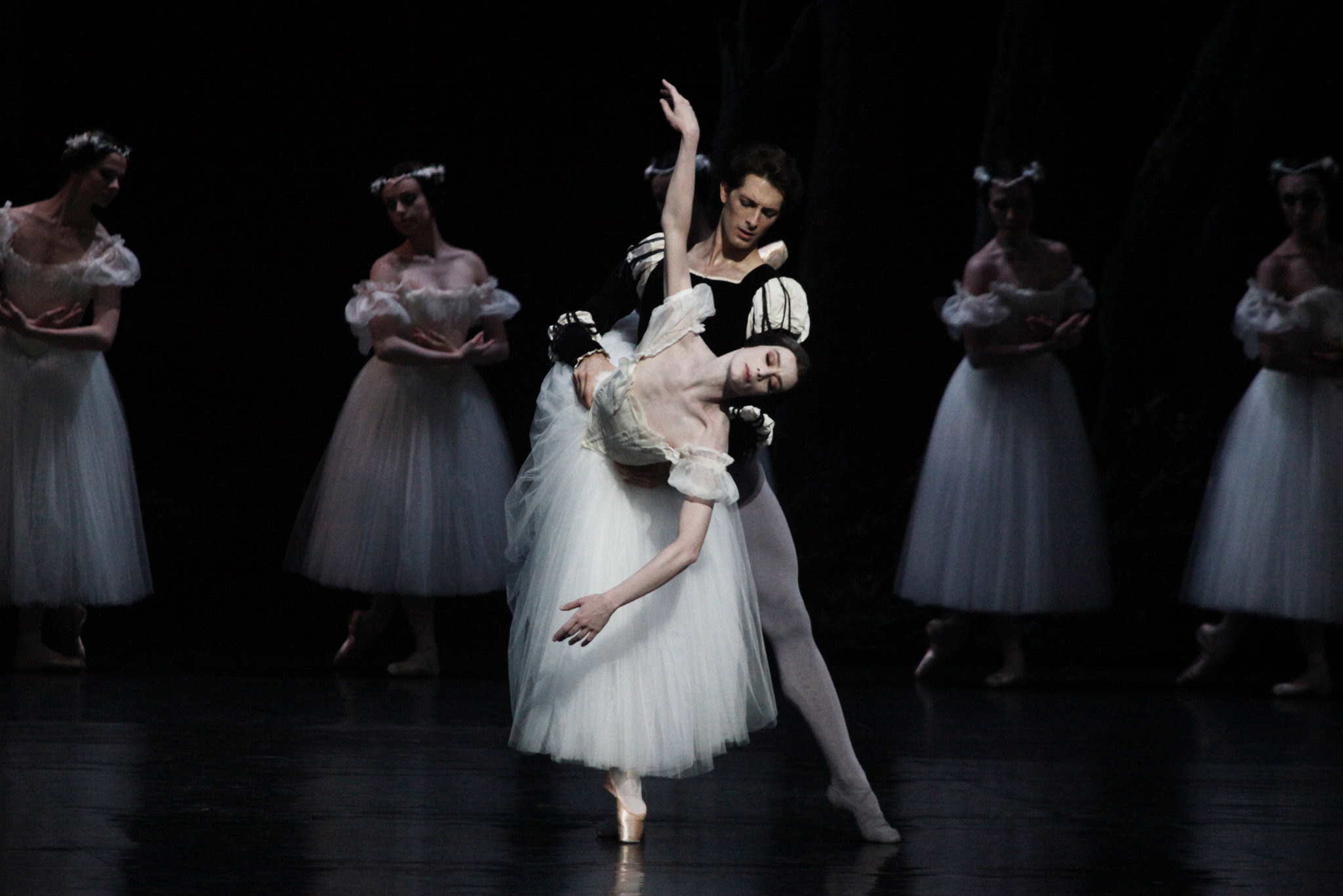 Giselle
Paris Opera Ballet
July 13 and 14 (evening), 2012
Giselle premiered at the Paris Opera Ballet in 1841, and since then, nearly every major ballerina has tried her hand at the title role. The POB prides itself on scrupulous preservation of "their" ballet. It was not a surprise, then, that the POB's tour of the United States included Giselle, and that at the two performances I attended, there seemed to be literally no empty seats. It was, as they say, an event.

After seeing two performances, I can say there are certainly virtues to the way the POB dances Giselle. For one, the uniformity of schooling is a joy to see -- girls in the corps de ballet seem to be selected rigorously for a sameness in height, body shape, even face. What's more, when they move, their identical schooling is obvious -- the wrists all bent in the same fashion, the legs held at the exact same angle, the necks all proud and haughty. This was particularly evident in the famous arabesque voyages of the Wilis in Act Two. There were no "strays" -- all of them moved across the stage like an inexorable Wili army, their faces staring at the floor. It wasn't like the ABT Wilis, where one girl, bless her heart, is always completely out of sync. This feat earned such a loud ovation in tonight's performance that Myrtha's final solo was completely drowned out by cheers.

The production is lovely in many ways. In Act One, the mime is very clear and even deliberate -- Berthe's warning about the Wilis is accompanied by a darkening of the stage as the whole village listens to her chilling tale. There is much more fuss made about Albrecht's nobelmans' sword being the giveaway that gets his treachery exposed. The peasants have much more dancing to do than the ABT production -- for one, they dance in the background during the peasant pas de deux. I also like how just before Giselle's moment of realization, the whole stage freeze frames, and the spotlight is purely on her face.

The similarity in schooling means that the company will also display the same weaknesses. For one, I noticed that the POB dancers do not have a particularly beautiful arabesque. There's a priceless documentary of Alexandra Danilova demonstrating to her students how the audience should see the beauty of the upward leg motion. Well, the POB dancers' arabesques all end at the exact same angle, but the actual motion upwards is ... jerky. No other way to put it -- the girls lift their leg to a little below 90 degrees, and then pull the leg upwards in a muscular jerk to achieve the final position. This weakness was apparent from the corps de ballet to the principal "etoiles." Nor do the females have much elevation. Much of this might be in the way they all seem hellbent on maintaining an extremely rigid back while dancing at all times. The advantage is it gives them an austere classical plumb line.

Of the two performances I saw, last night's was weaker, overall. Aurelie Dupont (above) has the looks of a fashion model. Gorgeous cheekbones, certainly. Her dancing, however, I found quite frankly disappointing. She's a very careful dancer. In Act One, her Spessivtseva variation had great hops on pointe, but in the ending pique turns, she actually slowed down so much in the final turns that the effect was sterile. Her Mad Scene was not that memorable. It was Act Two that was the real disappointment. She did a lot of technical shortcuts that I found disappointing for a dancer with her renowned reputation. In the initiation scene, her arabesque turns were slow and careful. She also has very little elevation, and Giselle is a huge jumping role. She only did two sobresauts (bunny hops) that barely got off the ground, instead of the usual four, and stopped the backward entrechats well before the musical cue to stop. All these weaknesses would have been forgivable had she invested Giselle with any special quality, but she really didn't. It was professional, but nothing more.

Another huge disappointment was Emilie Cozette's Myrtha. The choreography for Myrtha in the POB version is different from the usual choreography -- instead of the the sliding, fast bourrees, the POB chooses to have Myrtha enter the stage in a series of very slow, deliberate bourrees. This would have been fine had Cozette not had so much visible trouble with these steps. Also, Myrtha's solo was marred by some extremely bumpy, jerky arabesques. I really can't think of why Cozette would be cast as Myrtha other than she has the blocklike torso and a somewhat stern expression. Her jumps were also very weak.

The evening might have been a total disappointment had it not been for the incredible Albrecht of Mathieu Ganio. He was, in a word, astonishing. He has the long, beautiful lines of a danseur noble, but he's not just a pretty boy. He has the strength and stamina for this marathon role. The overhead lifts in Act Two were breathtaking. Ganio also stunned the audience with perhaps the longest and most high-flying series of entrechats I've ever seen. He also started the entrechats sort of low and close to the ground, but gradually got them higher and higher in the air, as if he were driven by some higher power. He wasn't just a bag of tricks though. His finest moment came in the final moments of Giselle. As Giselle bourreed off the stage, Ganio reached one last time and buried tried to touch her skirt. A beautiful performance, and I'm honored to have seen it.

Tonight's performance featured the recently retired Clairemarie Osta, and her real-life husband Nicholas LeRiche. Osta had many of the same technical weaknesses as Dupont. Turns slow, a somewhat jerky, effortful arabesque/developpe, not much elevation. But Osta was tried her hardest to fulfill the technical demands of the role, and I really respect that, especially in a dancer who is officially retired. She did the four sobresauts, even though they didn't get very far in the air. Her footwork was still crisp and more articulated than Dupont. Her entrechats were light, fast, graceful. Most importantly, Osta had what Dupont lacked -- a real Giselle soul. She doesn't have the breathtaking frailty and sweetness of Alina Cojocaru, the astonishing technical abilities of Natalia Osipova, or the haunting ghostliness of Diana Vishneva (the three best Giselles I have ever seen), but she is lovable and believable. In Act One, this was a shy, sensitive girl, but she was playful and even funny when with Albrecht. When her mother came out of the hut, she tried to hide behind Albrecht, like a little child. She began the Spessivtseva variation in the opposite direction, so she was dancing towards Albrecht. When Osta realized Albrecht's betrayal, she gave him a completely blank, deranged look. Imagine my surprise when as the clock struck four, and Giselle bourreed offstage, Osta again gave Albrecht that blank, deranged, "Who are you?" look. It was a beautiful detail, a connection from Act One to Act Two.

Emilie Cozette was again Myrtha, but tonight she was much improved. Her bourrees were more effortless, her leg not as wobbly, her jumps more authoritative. Nicholas LeRiche as Albrecht was a bit of a let-down after Ganio's performance last night, but he was perfectly fine. A sensitive partner for his wife. He did not do the full series of entrechats, but substituted in the first half of the variation a series of barrel turns that ended at Myrtha's feet. The only thing that was a bit distracting was that LeRiche has a bald spot that was carefully hidden by some industrial hairspray and a combover. As the night wore on, the combover lost its place, so by the end of the night ... you could see the bald spot. Again, probably not fair to judge a dancer on something like this, but it was distracting.

The peasant pas de deux in tonight's performance was the only sore spot in an otherwise much stronger performance. It's always an awful feeling when it dawns on you that on this particular night, a dancer simply doesn't have it in him to do the steps ... at all. That happened tonight with Daniel Stokes. During the two difficult, jump-laden variations of the peasant pas de deux, he labored through the entire variation, and then almost fell ... both times. The way he desperately twisted his knee to avoid totally splatting looked painful. It was even more painful to see how crestfallen he looked when the whole thing was over. He had the misfortune to be paired with Amandine Albisson, who breezed through her variation and looked like she was auditioning for Giselle.

I'll end this with this video I found of Ganio as Albrecht. Enjoy!