Raymonda at the Bolshoi

Recently the La Scala Ballet released a DVD version of a reconstruction of the 1898 production of Raymonda. That video is a must for balletomanes, as it really brings a lot of dignity and clarity back to this ballet. I thought about that reconstruction as I watched the HD transmission of the Bolshoi Ballet's Raymonda. The production is of course by that great aesthete, Yuri Grigorovich, who managed to make every single production he's ever created ugly. (I could do a nice little poll. Mirror mirror on the wall, which is the ugliest Grigorovich production of them all?)

The 1898 reconstruction of Raymonda reveals that both the major male roles, Jean de Brienne, and Abderakhman, are essentially non-dancing roles. Jean de Brienne gets one measly variation but is otherwise a pure cavalier role. Abderakhman is a mime role. A lot of plot points are resolved by the restored mime, especially a much larger role for the White Lady. There is also much more character dancing for the corps de ballet.

Of course, all the mime and the White Lady, and much of the character dancing is gone in Grigorovich's version. In its place are, predictably, larger dancing roles for the males.  There are also some truly unfathomable dramatic choices, such as Raymonda falling asleep standing up against a column. But what is the absolute worst about Grigorovich's version is that he makes the role of Abderakhman an outrageously over-the-top mustache-twirling villain. In the original version, Abderakhman is the antagonist. He is Muslim, and Jean de Brienne is the Christian knight. But he's not a cartoon villain -- after all, his only crime is that he too loves Raymonda, and he's the wrong ethnicity for a Hungarian princess. Grigorovich throws in every offensive Muslim stereotype in the book, and adds a few more indignities. For instance, Abderakhman isn't even allowed to dance classical ballet steps -- he makes his entrance doing aerial cartwheels. The rest of the time he does steps that can only be described as, uh, spazzing out. Wiggling his head, shaking his body, wildly gesticulating with his arms. He looks like he has Tourette's syndrome. 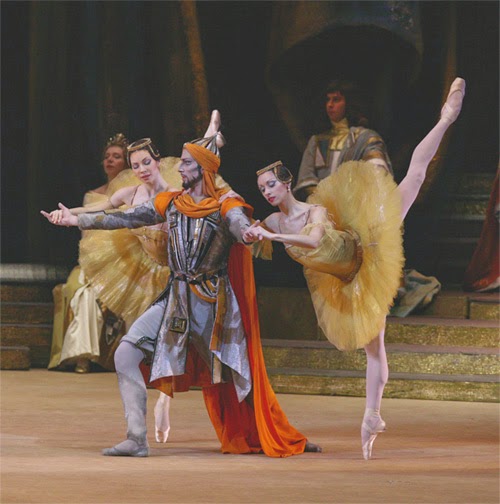 It's not mere political correctness that made me squeamish while watching this. It's that in the 1898 version, the "villain" is accorded more dignity than the version Grigorovich created in the 1980's. The Soviet Union and nowadays, Russia, is a very ethnically and religiously diverse area. There have been many, many great ballet dancers of Muslim heritage. I can't believe Grigorovich would show such insensitivity. Moreover, such a cartoonish Abderakhman actually undercuts some of the already weak storyline of Raymonda. There is supposed to be a certain curiosity Raymonda has about the virile, exotic Saracen knight that is a foil for her more conventional love for Jean de Brienne. In this production, there isn't that tension at all -- bad girl vs. good girl, East vs. West, exotic vs. familiar -- Raymonda is disgusted by the antics of Abderakhman and his Oriental dancers from the start. Alexandrova cringes whenever Abderakhman comes near her. So the reading of Abderakhman's role  is not only offensive, it's actually wrong to the spirit of the ballet.

The sets and costumes need a severe makeover. The HD reveals that the plywood steps that make up the main set are literally falling apart, the scenic drops now look like cheap curtains, and the costumes are dull, drab, and ugly. Jean de Brienne is wearing an Elvis-in-Vegas style costume, Raymonda iss in a series of pale, washed out tutus. Abderakhman -- well, look at the picture above. The wigs have to be seen to be believed.

Despite all these demerits, this Raymonda was well worth watching. It confirms my belief that right now, the Bolshoi is the greatest ballet company in the world. Every role, every variation, every dance, was simply blown out of the park. The corps de ballet look perfectly elegant in the dream sequence, but can switch like a dime to the folk-inflected Hungarian dancing of the last act, or the long "Muslim dancing suite" in Act 2. This kind of top-down greatness, in which every girl in every variation seems to be saying, "Watch out, principals, you can't stop me!" is simply wonderful to watch.


Maria Alexandrova was the Raymonda, and she's the kind of dancer that maybe can only exist at the Bolshoi. Tall, with a squarish torso and rather muscular arms and legs, she doesn't have that tapered, elegant, waifish look so prized by balletomanes. But she's an incredible terre a terre dancer, and that's what this role needs. It was created on Pierina Legnani (shown above). Legnani was the original Odette/Odile, and was neither beautiful in face or figure. She was, however, an incredible technician and roles created on her still challenge ballerinas today. I loved Alexandrova's regal, womanly strength. She used her broad shoulders and neck to create an aura of authority. I particularly loved her clapping variation, which ended with a series of dazzling passe/releves and a loud clap. Alexandrova seemed to be literally stabbing the floor. Should she ever dance Giselle? No, but in this kind of role, Alexandrova is great.

Ruslan Skvortsov also represents the best of the Bolshoi tradition. He has those thick thighs and muscular upper body that allows him to propel himself in the air and to lift ballerinas as if they were paper, but there's no sacrifice in elegance. But Jean de Brienne, even though Grigorovich gives him some solos, is still one of the weakest leading male parts in classical ballet. He's just sort of there, and even giving him some variations doesn't change his complete blah-ness as a character. This ballet belongs to Raymonda. As for Pavel Dmitrichenko (Abderakhman), he did the best he could with such a ridiculous character. At least he looked like he was having fun.