Balanchine in B&W and Color 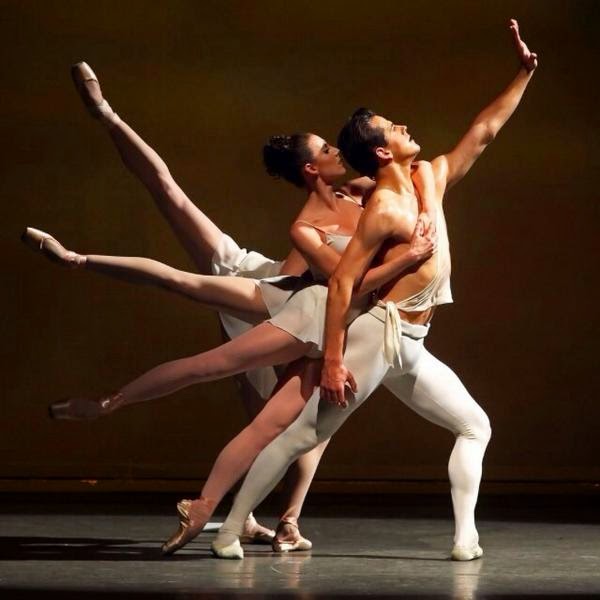 The NYCB fall season. It only started a few years ago, but now I can't imagine life without it, and it's become maybe my favorite NYCB season. The dancers are fresh and rested from a summer off, the programming is usually full of Balanchine classics, and the weather's nice so you don't have to trudge home from the ballet in snow boots.

The 9/27 evening performance at the NYCB was a severe all Stravinsky, all B&W program: Apollo, Momentum Pro Gesualdo/Movements for Piano and Orchestra, Duo Concertant, and Agon. It's a testament to Balanchine's genius that not once did I think, "Wow, this is too many leotards against too much Stravinsky dissonance."

Apollo was of interest to balletomanes because it featured a new Muse combo: Tiler Peck making her debut as Terpischore, Ashley Bouder as Polyhymnia, and Lauren Lovette as Calliope. Robert Fairchild's Apollo is a known portrayal. I know some balletomanes prefer the other Apollo in the NYCB's roster is Chase Finlay, who looks like an Apollo, with the blond hair and somewhat aloof stature. Fairchild looks more like the boy-next-door, but his portrayal has a crispness and cleanness that the more uneven Finlay lacks.

Fairchild's muses were definitely shorter and less leggy than the traditional NYCB muses. But their similarity in build and appearance made them look more like a sisterhood, and all three of them were memorable in their solos, although Ashley Bouder's shoes squeaked loudly against the floor whenever she did that pique turn into arabesque. Peck's Terpsichore is still a new portrayal, and I'm sure with time she'll grow more into the role. As of now I can just admire what she already brings to the ballet: of course her musicality and precision, but also how she already is balancing a playfulness with goddess-like aloofness.

Momentum/Movements are two jewels of works always presented together, and Teresa Reichlen was absolutely masterful in these two brief ballets. Her body looks almost designed for a white leotard -- she uses her severe body line to accentuate the sharp spikiness of Stravinsky's music. Her upside down split in Movements (partnered by Ask la Cour) was stunning. Balanchine always adds the most unexpected moments of wit in these ballets -- during Momentum, all the ladies are lined up in a penchee arabesque diagonal. It looks very severe. Then they suddenly all flex their feet in unison. And now it's fun.

Duo Concertant is a ballet I've seen with the ABT. ABT dances the ballet completely "vanilla." The dancers seem to have been instructed to simply do the steps, and nothing more. Last night Sterling Hyltin and Chase Finlay showed how fun, tender, and cute this ballet can be when done right. Sterling Hyltin doesn't have to try to be adorable. She is adorable. When she and Chase react to the onstage piano and violin by dancing, they look like Astaire and Rogers. Just moving happily with the music. Hyltin and Finlay have wonderful chemistry -- her playfulness offsets his occasional stiffness. Their final embrace in the spotlight just melted your heart.

Agon is a NYCB house special, and the 9/27 performance was an above average rendition. Andrew Veyette, Lauren King, and Ashley Laracey were wonderful in the first pas de trois, but Rebecca Krohn was slightly shaky and tentative in the second pas de trois. Devin Alberda and Daniel Applebaum were wonderful partners who gripped her shaking hands. I guess I'm just remembering how wonderfully Teresa Reichlen used to do those supported penchee arabesques and Krohn hasn't reached that level. Maria Kowroski was as usual stunning in the famous pas de deux. Her long limbs and jelly back were contorted in all those iconic poses without a hint of strain. Amar Ramasar did his usual stellar partnering. On Tuesday September 30 the performance was delayed by half an hour because of a fire alarm. Despite the delays it was a crowded house because the program was filled with Balanchine's Greatest Tchaikovsky hits. Serenade, Mozartiana, Tchai Pas de Deux, and Suite #3 (Theme and Variations) is the closest thing the NYCB has to a box office bonanza other than Nutcracker. Before the curtain started Peter Martins gave a speech announcing that despite "union overtime" he wouldn't trim the program. Well. How generous of him.

Unlike the previous program this evening was awash in color. There were wafting Romantic dresses, cute tutus, tiaras, everything people think is "ballet." Serenade received an unexpectedly strong performance. I have no idea why this ballet has been so indifferently cast over the years, but tonight's trio of girls (Sterling Hyltin, Savannah Lowery, and Rebecca Krohn) had enough contrast and energy to make it work. Hyltin (Waltz Girl) was wonderfully light and feathery, Lowery (Russian Girl) looked odd in a Romantic tutu but danced with nice energy, and Krohn's (Dark Angel) ghostlike, almost creepy figure for once was used to full advantage. Tyler Angle and Ask la Cour followed the City Ballet Serenade tradition of disappearing almost entirely while onstage.

After intermission Sara Mearns made her debut in Mozartiana. Mearns doesn't really have the right posture for the Preghiera -- it's one of her idiosyncrasies as a dancer that she doesn't do that long-necked, chin-to-the-heavens ballerina thing, and the Preghiera is exactly the time your neck needs to be elongated and your chin raised to the heavens. The Theme and Variations section showed her at her best though -- she's not always accurate, not always musical, and her body line and posture can be idiosyncratic, but she's one of the most compelling dancers the NYCB has precisely because of her oddities. She doesn't follow the NYCB pattern of sharp attacks on the beat -- instead she elongates and stretches the musical phrase with her lush, extravagant way of moving. Chase Finlay as the cavalier looked great but was overshadowed by Mearns. Their interactions didn't really have the right courtliness. And Anthony Huxley was just there. The kids were cute.

Curtain went down, and then went up on Tiler Peck and Joaquin de Luz who proceeded to give a barnstorming rendition of the Tchaikovsky Pas de Deux. Tiler Peck is such an effortless dynamo and a human gyroscope, de Luz is aging but still has the horsepower, and the audience went away happy. Peck's fouettes in the coda included some fancy arm flapping and several doubles. My friend told me that in the old days ballerinas used to leap a big distance across the stage for the fishdives in the coda. I don't think you can kill this ballet if you tried though. Peck and de Luz were called out three times for curtain calls.

Suite #3 is a ballet where I admit I totally tune out the first three sections. It really is shampoo ballet, where girls run around the stage with long hair and that's about it. With that being said, Teresa Reichlen and Russell Janzen made something very special of the Elegie section, almost enough to make me think it wasn't a total waste of time.  Of course everyone stays for Theme and Variations, and Ashley Bouder made it worth the wait. Her portrayal is really a modern classic -- she has the balances, the security, the confidence, and most of all, the ability to execute all the difficult steps with an almost insouciant serenity that makes her the standard to beat in this role. I've seen so many ballerinas start to wobble when forced to change positions (attitude, developpe, arabesque, penchee) while being arm-linked with the corps de ballet -- Bouder never even adjusted her torso for balance. Gonzalo Garcia however looked tired and tentative, especially in that punishing double tour sequence.

A few years ago these kinds of programs would have been rare at the NYCB -- it would be more common for a "new Martins/Millepied/BlahBlahBlah ballet" to be sandwiched in between two masterpieces. It was an awful trick -- you could leave, but you'd miss, say, Symphony in C.  Two programs with four Balanchine masterpieces each signals a welcome change within the NYCB of how works are presented.
Ashley Bouder Ashley Laracey Balanchine ballet Chase Finlay Lauren Lovette Maria Kowroski NYCB performance review Robert Fairchild Sara Mearns Sterling Hyltin Teresa Reichlen Tiler Peck