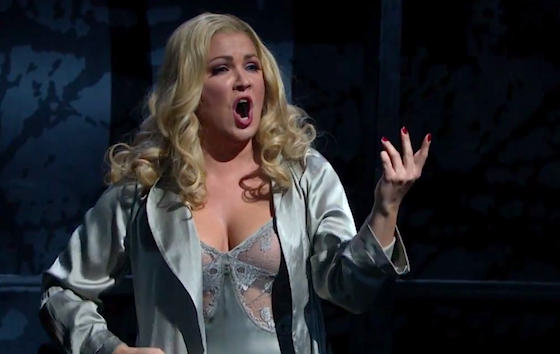 The opening night Macbeth was surprisingly sparsely attended but strong word of mouth quickly made subsequent shows sold out. Last night I decided to catch the second-to-last performance of Macbeth -- all the way up in the Family Circle, standing room.

First things first -- it's a cliché that sound is best in the Family Circle, but a very true one at that. Only in the upper rings of the Met do you get the full voice/orchestra balance, so the textures and nuances of orchestration that are missed in the lower rungs ring loud and clear from the upper rings. I heard details of Verdi's score that I never could have heard sitting in a prime orchestra seat.


Second of all, the Adrian Noble production from 2007 looks amazing from so far away. From up close you can see the tackiness -- the oddly dressed, squatting witches, the never-ending business with the chairs (most distracting in the Sleepwalking Scene), the costumes that look for lack of a better word, well, cheap. But from so far away, the dark lighting and shadowy costumes made the whole thing look ghostly and atmospheric. The production really needs to be seen from far away.

I thought it was obvious that compared to opening night, Lucic (Macbeth), René Pape (Banquo), and Joseph Calleja (Macduff) all sounded slightly tired. Lucic in particular appeared to be doing a sort of early-Verdi-meets-Bayreuth-bark thing. His voice, which can turn wooly and clouded under pressure, brayed and was often beneath the pitch. Only during "Fuggi regal fantasma" was there a hint of the legato and cantabile line that's so important in early Verdi. Luisi's treatment of the score again tries to erase the sometimes crudely written Verdi melodies. It makes the music sound more important, but perhaps less exciting.

Anna Netrebko, however, seemed completely freed from any pressure to be note-perfect for the HD, and instead she did some wonderful vocal experimentation. It's odd what she apparently thought needed improvement, vs. what I thought needed improvement. For instance, on opening night, I thought her opening aria "Vienni t'affreta" was a bit rough and imprecise. Last night the bumpiness was still there, and there were still missing grace notes and trills. I also thought that the Act Three duet with Macbeth on opening night was marred by awkward blocking and a weak climactic high C -- well it was even weaker last night. The C was barely touched as she pulled Lucic into a rather awkward tight round of horizontal mambo.

However, the changes she did make were all improvements. For instance, "La luce langue" was even more expressive than opening night -- less of a sledgehammer approach, more introverted and sung as an internal dialogue. Maybe the greatest improvement was during the Brindisi -- opening night I remembered her sounding somewhat insouciant throughout. Tonight, during the second verse her voice had a cold rattle, as if she were gritting her teeth and shaking with rage at her husband. She also managed two full-throated trills that in context sounded like her exerting her control over the situation in the most kick-ass way.

And the Sleepwalking Scene -- opening night I thought she was note-perfect, but she seemed determined to get through the scene without any vocal bumps, so the portrayal was very introverted. The fussy business with having her walk on chairs didn't help. Tonight, she added much more fanciful "traditional" mad scene effects -- some ritards here and there to emphasize Lady Macbeth's confusion, a lot more conventional "mad scene" acting. She colored her voice differently -- gone was the sheet of ice in the opening night. Her voice sounded more disconnected, almost kooky. She also took the final D-flat as a thin whisper, a vocal effect that so many sopranos try without much success.

Interpretively she's also added a lot since opening night. Now Anna's Lady Macbeth is even tougher, if that's even possible -- at one point she literally gives her swift husband a kick in the rear. I doubt Lady Macbeth is a role Anna is going to sing much in the future -- sometimes I could hear that despite her large voice and astonishing range, she was pushing her voice to the maximum. So I'm just glad that I caught 2 of these performances, so I saw both her initial thoughts on the role, and her final thoughts.
Anna Netrebko Joseph Calleja Metropolitan Opera performance review Rene Pape