A last look at Ratmansky's Nutcracker 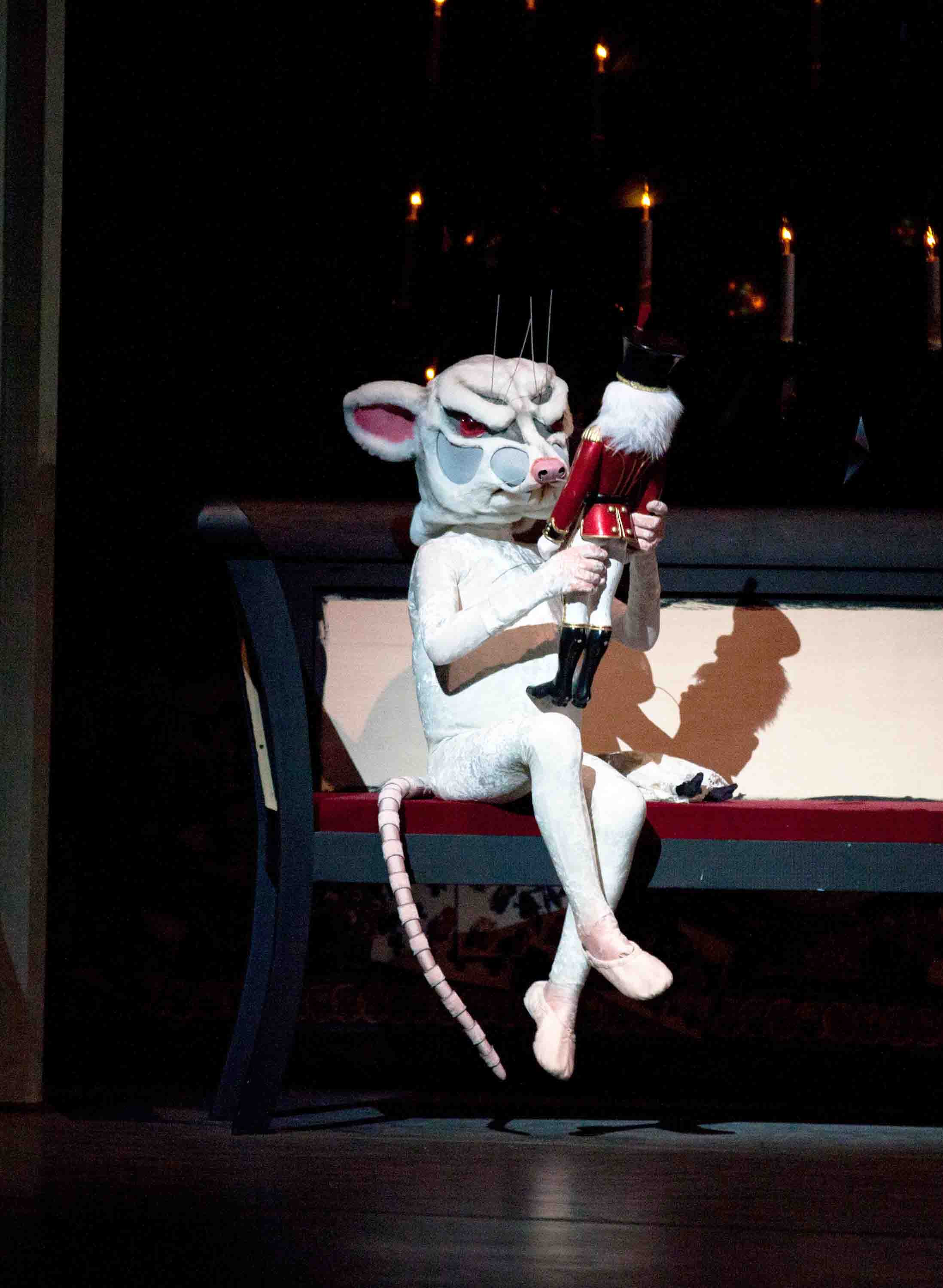 I first saw Alexei Ratmansky's Nutcracker at the at its premiere four years ago. I remember it being an exciting, expensive event -- seats in the upper reaches of BAM's claustrophobic balcony were nearing triple digits. Since then I've never been back, because despite the charms of Ratmansky's take, it didn't feel as magical as Balanchine's version for the NYCB. But this year it was announced that Ratmansky's Nut would be moving out of BAM forever (!!!). A look at ticket sales a few weeks before the performance hinted why: even with heavily discounted tickets, tickets were easy to get. In short, it was critically lauded but poor box office. So last I went back to get a last look at this Nutcracker. I'll probably never see it again.


It's weird how memory is both stunningly accurate and deceptive. For instance, I remember how cute and funny the Little Mouse was four years ago. He's still cute and by far the best thing about Ratmansky's Nut -- Justin Souriau-Levine stole the show again. I also remember the scenery for the second act being threadbare and even grim looking, while the divertissements were charming and whimsical. Memory didn't fail me there -- Act Two had the same cheap-looking scrim with painted golden columns that made the Sugar Plum kingdom look vaguely jail-like, while Ratmansky's quirky sense of humor livened up the divertissements. Balanchine might have more substantial awe-inspiring choreography but Ratmansky's Arabian dance (with a bunch of harem girls ditching a eunuch), Russian dance (nice slapstick Trepak) and Mother Ginger (Little Mouse wreaks havoc!) were all highlights of the show.

But in other ways memory totally failed me. For instance I remember disliking the Snowflakes originally -- they weren't as pretty and magical and Balanchine's crowned, wand-waving creatures. But on second viewing their recreation of a sinister bone-chilling blizzard was perhaps the most inspired moment of the show. I loved the way they slowly turned from gentle falling snowflakes to surrounding Clara and the Prince with hypothermic implacability. I also can't believe that I didn't remember how touching Clara's first interactions with the life-sized Nutcracker Doll are. The switch from life-sized doll to toy is one of Ratmansky's most sensitive moments. 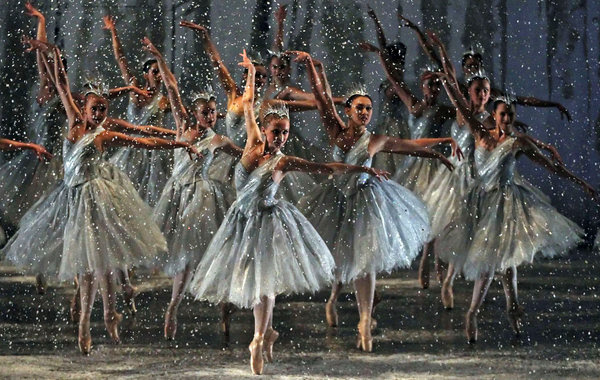 Another way memory failed me was that I was a lot less impressed with the choreography for the grown-up Clara and Prince upon second viewing. Tonight the Soviet-style lifts and all the swoony moves seemed distinctly clichéd, especially when you consider Ratmansky's generally offbeat, humorous style. Maybe it was because last night's Clara and Prince (Sarah Lane and Joseph Gorak) are very charming dancers, very pretty dancers, but they don't dance on a grand scale. So the big Grigorovich one-handed lift and all that swooning and diving looked gauche. On the other hand the first pas de deux where the child Clara and Prince mirror their adult selves is a lovely moment.

The production is only four years old, but in many ways already looked old and careworn. The small, narrow BAM stage made it a necessity for some of the dancing to occur in the wings. Act One in particular looked cheap and non-descript, and claustrophobic. The Stahlbaums' home didn't have anything that would distinguish it as a real "home." Ratmansky's choreography often seemed busy and the humor was hit or miss. The Little Mouse was cute but the kiddie tantrums weren't and neither were the hamming adults. The ABT's orchestra looked cramped in the tiny pit and played badly -- the crucial strings were out of tune and there was little sense of rhythm. They did the impossible and made Tchaikovsky's music sound lumbering and plodding.

The performances were a lot like what I often see from ABT -- great soloists, underdeveloped company. Sarah Lane and Joseph Gorak are both charming, lovely dancers but looked underrehearsed -- for instance, that big one-armed Grigorovich lift could have looked less awkward with more rehearsal and practice. Lane also ran out of gas in the celesta variation. Twice she stopped dancing entirely and the orchestra ground to a halt and waited for her to gather her energy. Again, practice and experience could prevent those momentum-killing moments. The Dance of the Flowers with the pollenating bees also had some poor coordination -- if the men didn't have bee helmets on, I never would have known that they were supposed to pollenate the flowers. It looked as if they were just running around the flowers. Victor Barbee was rather fey as Drosselmeyer -- he had very little rapport with little Clara (Annie Hinako Levy). Arron Scott and Luciana Paris were wonderful in the Harlequinade and Columbine duet but I've seen Scott dance this kind of solo for years. He can't do this forever. This company has talent, but not much in the way of style or uniformity.

This final view confirmed my original opinion that despite very charming and funny moments, what Ratmansky's ballet lacked was magic. I went with a friend and ran into another friend and one is a balletomane while the other is a casual enthusiast but both of them commented on this lack of magic, so I don't think it's just me being a stick in the mud. I mean, why is magic important anyway? Well, in the case of the Nutcracker, it's important because the magic in Tchaikovsky's score never stops. It's Tchaikovsky's music that gives the paper-thin storyline depth and soul.

Ratmansky's best work often resembles folk dance -- he has a tendency to choreograph on the downbeat of the music. In the first act the kids have a tantrum and stomp their feet on the downbeat repeatedly. Balanchine's choreography, on the other hand, seems to expand naturally when Tchaikovsky's music soars. I'll just give one instance: in the finale, there's a rising scale -- in Balanchine's version, the sled that carries Marie/Clara and the Prince rises along with the scale, so the curtain falls on them possibly heading towards the heavens. Music goes up, Marie goes up. Ratmansky has Clara falling downwards in her bed. The music goes up, Clara goes down.

So this isn't my favorite Nutcracker, but it doesn't mean it wasn't a fun night. It's always wonderful to see how engaged little kids are in this ballet -- it's great to hear girls who give a blow-by-blow description to their mothers during the performance. It might be noisy, but it's a lovely kind of noise.
ABT Balanchine ballet Joseph Gorak Nutcracker performance review Petipa Ratmansky Sarah Lane