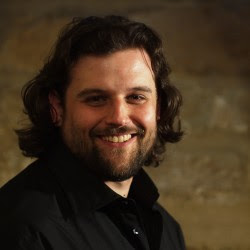 Most times when a star singer gets sick at the last minute and the cover is sent onstage, audiences groan. They don't wish for greatness, just competence. Get through the role, don't make the ticket-buyers too disappointed, that's what general managers hope.

Last night, uber-tenor Jonas Kaufmann fell ill, and his cover Jean-Francois Borras was sent onstage to sing Werther, one of the most demanding tenor vehicles in the repertoire. Borras also happened to be making his house debut. Before the performance began I saw dozens of people trying to sell their tickets.

As it happens the day before I listened to some clips of Sonya Yoncheva's Violetta on youtube and found the Alfredo in those clips very appealing. "Nice voice, would like to hear him," I thought. And 24 hours later, voila, I WAS listening to him live!

I feel bad for those who sold their tickets, because as soon as Jean-Francois Borras opened his mouth, one realized that this was not the typical "serviceable" cover. This was a major-league tenor voice. If you really wanted to hear Jonas Kaufmann and no one else would do then the night would have been disappointing, because Borras is not Jonas Kaufmann -- he'll never sing Parsifal or Lohengrin. His voice lacks Kaufmann's stentorian heft. Jonas's voice opens up to a ringing, trumpet-like upper register. Borras is a purely lyric tenor. But what a fine voice! It's sweet, evenly produced, and projects beautifully throughout the 4,000 seat house. He sings with an idiomatic command of the language (he's a native Frenchman) and shades the role but without resorting to the extreme changes in dynamics that is Kaufmann's trademark/mannerism. Borras's brighter, more forward timbre makes Werther sound younger and less morose. More of a young guy in love. Sort of emo, but not the pathological depressive that was Kaufmann's portrayal.

For someone told to go onstage in such short notice, Borras was a surprisingly receptive, sensitive actor to Sophie Koch's Charlotte. They were really listening to each other. Their duets had a touching intimacy. Koch has toned down some of her hoity-toity, priggish mannerisms, although her body language is still awkward and she can't really find the tricky balance between passion and duty that is at the heart of Charlotte's predicament. In Act Three I thought she kind of went too far in the other direction by throwing Werther's letters all over the room. Koch's mezzo is a big, ripe, roaring voice, but it blended well with Borras. I want to be more psyched about Koch. During the Letter Scene there was a moment when she went downstage center, opened her mouth, and the sheer volume was jaw-dropping. She has such an impressive instrument. I just wish she did more interesting things with it.

The production was obviously not designed for Borras and that made for some awkward blocking. I've written more about the production and cast here. Borras is not a slim, curly-haired matinee idol a la Kaufmann. Borras is a burlier guy, and the production is all about small spaces for singers -- small benches, small couches, and in the final act, a tiny suspended box in the middle of the Met stage that symbolizes Werther's room. Werther's room has a small bed that was, well, it was too small for Borras, let's just put it that way. Borras also used most of his vocal capital in the first three acts, and he sounded out a little of gas during the protracted death scene. But these are minor quibbles. Borras did himself proud, did the role proud, and I heard people mumbling "Wow, great voice" throughout the night.

In the pit, Alain Altinoglu was (per his twitter) apparently sick with the same virus that afflicts Jonas and conducted sitting on a chair. He led a much tauter, livelier performance than opening night. There was no indulging of the singers tonight, and as a result the performance ended right around the projected time, which is virtually unheard of nowadays at the Met. Lisette Oropesa, David Bizic, and Jonathan Summers all did fine work in the supporting cast.

Bravo to Jean-Francois for a wonderful, sensitive performance and debut!