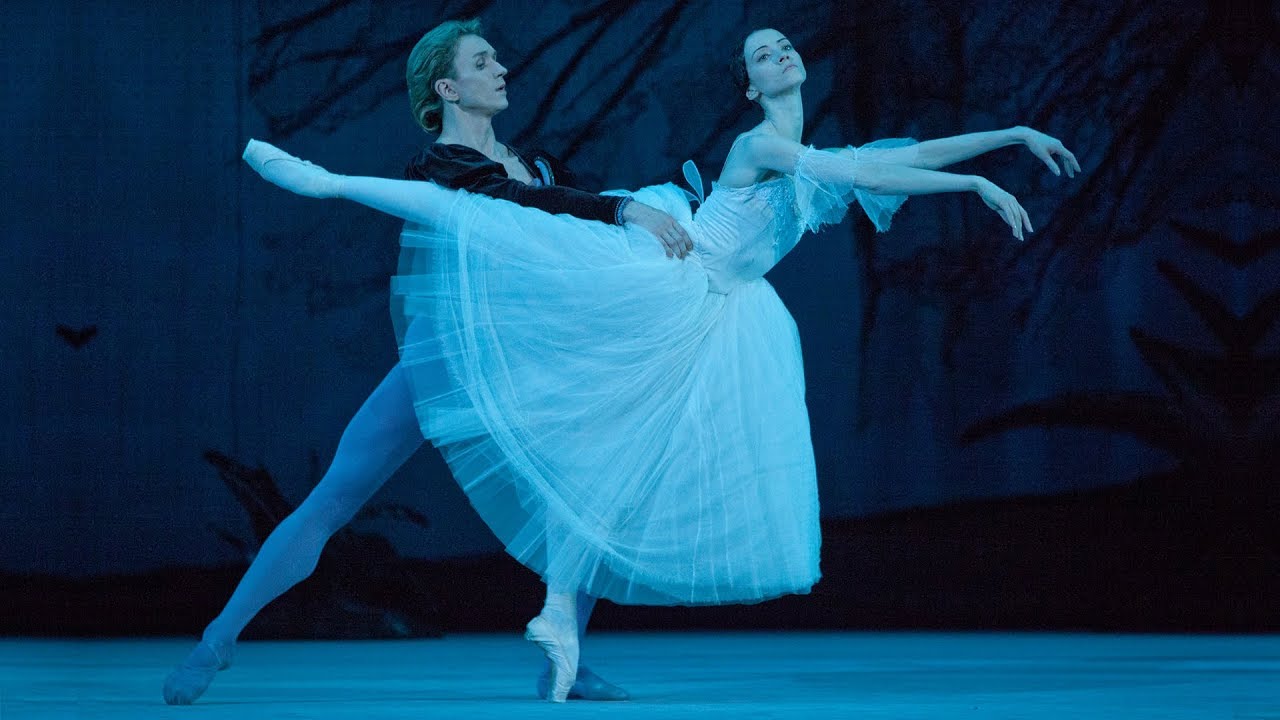 I woke up early this morning to catch the Bolshoi Ballet's double bill that was being transmitted to theaters worldwide -- in this case, a rather odd pairing of Asaf Messerer's Class Concert and the classic Giselle. Overall I found the presentation to be a bit of a disappointment. It was well-danced, it was worth watching, but it wasn't really a performance for the ages.

Maybe it was the odd pairing of Class Concert with a masterpiece lie Giselle. Class Concert was admittedly inspired by Harold Lander's Etudes and I think it's one of those ballets companies like to perform more than audiences like to see. The Bolshoi in this case could show off students from its excellent feeder school, the Bolshoi Ballet Academy, along with its impressive roster of male and female dancers, in a series of class exercises set to music by Glazunov, Anton Rubenstein, Konstantin Lyadov, Sergei Lyapunov, and Dmitri Shostakovich. It's also a nice company tribute to one of the most famous Bolshoi pedagogues. Yet class exercises in and of themselves, with no relation to the music, are not interesting. I was impressed by Maria Alexandrova's fouettes, the incredibly well-schooled children at the barre, and so on, but like Etudes, this ballet I feel is filler.

Giselle is of course one of the most enduring masterpieces of classical ballet, and it was the real reason I went to see the transmission. I have good luck with Giselles -- live I've seen Nina Ananiashvilli, Diana Vishneva, and Natalia Osipova and they were all in their own way transcendent. The best Albrechts I've seen live have been David Hallberg, Vladimir Malakhov, and Marcelo Gomes. Of course on video there are some wonderful Giselles like Alina Cojocaru, who I plan to see at the ABT when she guests this spring. I feel as if today's performance was generally well-danced, but fell below magical.

Part of the problem may be the Bolshoi production. It's very pretty visually, but there are some odd artistic choices. There is a weird reshuffling of some of Act One. All the critical mime is cut, from Berthe's warning about the Wilis to the conversation between Giselle and Bathilde. Albrecht did not scoot immediately when he heard the nobleman hunting party horn, but rather seemed to wander offstage without the audience noticing. For some reason the Spessivtseva variation is placed before the peasant pas de deux. Traditionally the peasant pas de deux is danced in front of the hunting party, and then as they leave and Albrecht returns, the Spessivtseva variation is danced. That ordering makes more dramatic sense because Giselle is dancing in front of her "man," and I've seen Giselles who look directly at Albrecht the whole time as she hops across the stage. The dance becomes one of love. But in the Bolshoi production, Giselle dances the Spessivtseva variation to no one in particular, and the peasant pas de deux is also danced for no one in particular. A lot of the drama of Act One is diffused by this odd artistic choice.

In the peasant pas de deux, I looked up a new name -- Chinara Alizade, who was a total delight. She's still in the corps de ballet, and is definitely a name to watch out for in the future. Andrei Bolotin's variation had some moments which could have been cleaner.

In Act Two, a lot of Myrtha's mime is also cut, so as a result she is no longer as terrifying or authoritative. And for some reason the Wilis are not as aggressive in this production as they are in others -- they don't pull of Giselle's veil, they don't really furiously push Hilarion down their diagonal line and to his death. He just kind of travels down the diagonal line of Wilis and jumps into the lake, without much of a push from Myrtha's captains. I suspect a lot of these choices might have to do with the Russian antipathy for mime, and love of pure-dancing. But the story, as I said, is weakened by these choices. 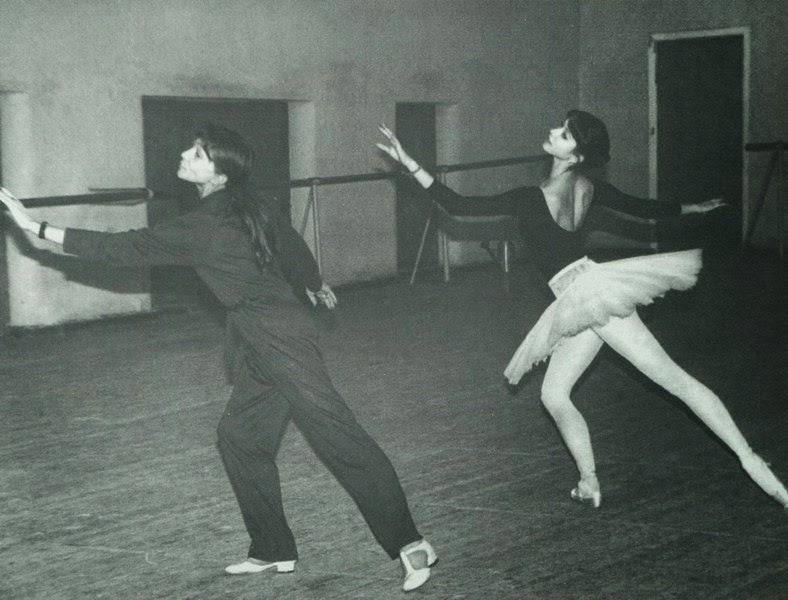 The Giselle was Svetlana Lunkina, who was the pupil of one of the most legendary Giselles of all time, Ekaterina Maximova. Lunkina like her late, great teacher is dark-haired and fragile looking. But she's also much more serious and reserved as a dancer, and lacks that kind of radiance that Maximova had even in old age. Her Spessivtseva variation was extremely well-danced -- she made it across the stage effortlessly. Her interpretation of Giselle is that of a serious, shy girl, and very understated. Her Mad Scene was quiet and introverted. No hysterical tears, pulling her hair, laughing maniacally, running frantically across the stage. It's pretty, but the reckless passion for dancing and for Albrecht that some of the most famous Giselles conveyed are not in Lunkina's portrayal.

In 1998 Lunkina was filmed in a Giselle that was only telecast on Russian tv. Her portrayal hasn't changed much in the ensuing time. Here is her Mad Scene:


I found Lunkina more disappointing in the second act. I do feel as if in Act 2 the great Giselles will exude a sense of abandon, or a sense of deep spiritual love and forgiveness. Many of them use stage tricks, like extra layers in their tulle tutus, or dark eyeshadow, to make the experience more otherworldly. Lunkina is still the shy, reserved girl of Act One. She went through the act in a rather A-B-C fashion, without either flying across the stage as an ethereal spirit or holding poses long enough to make a striking image. She doesn't have that much elevation in her jumps, or expansiveness in her movements. In the grand pas de deux she had moments of definite shakiness, and did not hold the exposed developpes and arabesques for a long time. Her face was passive and immobile. It was professional, but it wasn't transcendent.

Her Albrecht, Dmitry Gudanov, I thought was somewhat callow in Act One. Didn't really portray a very vivid character. But in Act 2, he exhibited an absolutely beautiful classical line, and didn't seem to tire at all. As Lunkina's Giselle became more reserved, I felt as if Gudanov turned up the heat and provided the performance with the necessary sense of abandon. I loved how at the very end of the ballet, he walked across the stage backwards, dropping flower petals as he walked, and finally sunk to the stage in grief.


Maria Allash at Myrtha didn't make as much of an impact as desired. She's a tall, stern-looking woman but for some reason doesn't exude the absolute authority and imperiousness of the best Myrthas. I noticed that instead of entering the stage with a series of bourrees she kind of bounded onstage, then stepped backwards and started boureeing. Weird. Her jumps were a bit workmanlike. The Wilis moved with a lot of unison, and a wonderfully severe line. They're travelling arabesques had their legs all at a perfect 90 degree angle, their torsos and heads upright, without any softening of the line that many Wilis will do to give a more Romantic look. 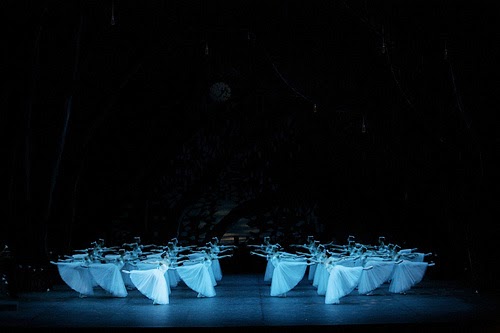 I love the fact that the Bolshoi and other ballet companies are taking advantage of the "live in HD" opera craze, and transmitting ballet performances. Although I feel as if the dancing of today's performance wasn't as magical as some of the Giselles I've had the fortune to see live, this is a great trend for ballet companies, and I hope to see it more often.